Tiger Shroff surprised all his fans on February 28, 2020, as he announced Heropanti 2 with its first two posters. The actor, who had made a smashing debut with Heropanti back in 2014, is all set to take the franchise ahead. Joining him is his stunning SOTY 2 co-star Tara Sutaria.

On Tuesday, Tiger announced the theatrical release of Heropanti 2 with a brand new poster that soon became the point of target by netizens. Internet users trolled Tiger and the makers of the film because of the similarities in the new poster to Hitman video game franchise. Instagram Fashion Police page Diet Sabya also called out the similarities. 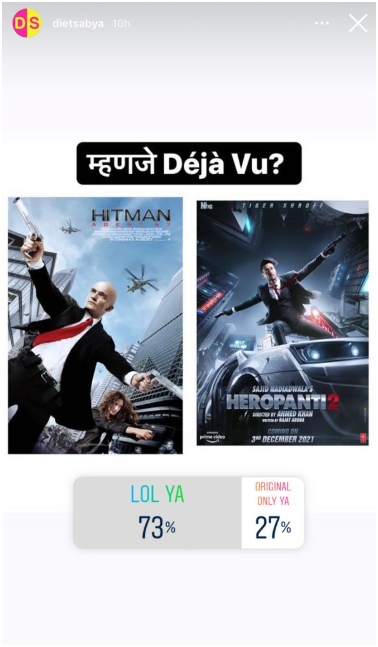 In the film, a standalone sequel to the first Heropanti, itself a remake of the Telugu film Parugu, Tiger's character appears to be wearing an outfit similar to the one worn by Agent 47 in the Hitman games and films -- complete with a black suit, a red tie, and two guns. "Hitman? Why?" one person commented on Tiger's Instagram post. "Hitman ka cover?" asked another. "You mean Hitman 2?" a third Instagram user joked. "Sasta Agent 47: Acha chalta hu duayon mei yaad rakhna (Keep me in your memories)," a fan wrote.

Hitman has been played on screen by Timothy Olyphant in a 2007 film, and then by Rupert Friend in a 2015 reboot.

Rahul Dravid gets a partner-in-crime in Deepika Padukone; turns out sh

Rahul Dravid's angry avatar in his new ad takes the internet by storm, Virat Kohli says 'Never seen this side of bhai'

Babil Khan breaks down while accepting father Irrfan's award, says 'you and I are going to make this journey together'

Wish to achieve a flawless glam like Erica Fernandes? The secret lies in THIS little skin routine prep step!