Advertisement
HomeBOLLYWOODENTERTAINMENT NEWSAlways felt like an outsider, haven’t had the Salman Khans looking after me: Prateik Babbar on the pitfalls of being a star kid

Always felt like an outsider, haven’t had the Salman Khans looking after me: Prateik Babbar on the pitfalls of being a star kid

Prateik Babbar has spoken about being a star kid, yet feeling like an outsider. The actor talked about not getting a launch 'maybe because he wasn't living with his father'.

Talking about it, he said, “There is some truth to it because if you are born into a film family if you are born into this industry, there is an open door for you already. But when you go through that door and experience real life, rather reel-life, you have to prove yourself. There’s no two ways about it. So it is a privilege because you have a foot in already but then, it is all about proving yourself. Nobody will take notice.”

Prateik then went onto talk about his upbringing and termed it 'complicated'. “I don’t know, I feel like I have had a different upbringing, even though being born in this industry. My upbringing was different, I was kept away from how film families live together and everything that comes with it, the later-than-life lifestyle and the love that you get from people. Of course, I had that. I did get the love and rather than love, it was the sympathy. It was different for me, it was sympathy because I didn’t have a mother, I didn’t stay with my father, it was a complicated upbringing.” 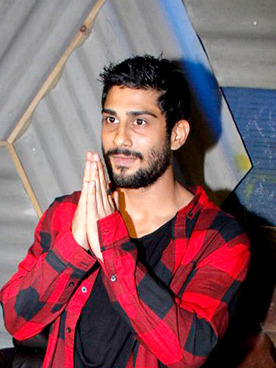 “It’s a tough one for me to kind of come to terms with the fact that I belong from a film family because it has been nothing like that for me. But I still am I part of a film family and son to very very respected actors and I am nothing but grateful and fortunate to be their son. I feel I resonate more with a self-made, killer of a performer. I think I resonate more than being someone’s son got an opportunity, okay, I have so many people backing you up. Everything on a platter, silver spoon on the mouth. I don’t resonate with that at all. I haven't had it like that. I haven’t had the Salman Khans looking after me, I haven’t had anybody looking after me. I have looked after myself," he concluded.