The Maldives has become the go-to vacay spot for our celebs. Several of them rang in the New Year 2021 in the island country. Now the latest to join the bandwagon is none other than Janhvi Kapoor. On the other hand, Shraddha Kapoor has now visited the island country three times in a row. However, this time she is apparently accompanied by rumoured boyfriend Rohan Shrestha.

Janhvi Kapoor is soaking in the sun in The Maldives. She has shared a bunch of breathtaking pictures from the exotic and serene locales. She is holidaying with her friends. Sharing her pictures she captioned it, “Last to get on the Maldives bandwagon but I fully get the hype (sic).”

Shraddha Kapoor vacationing in the Maldives with Rohan Shrestha 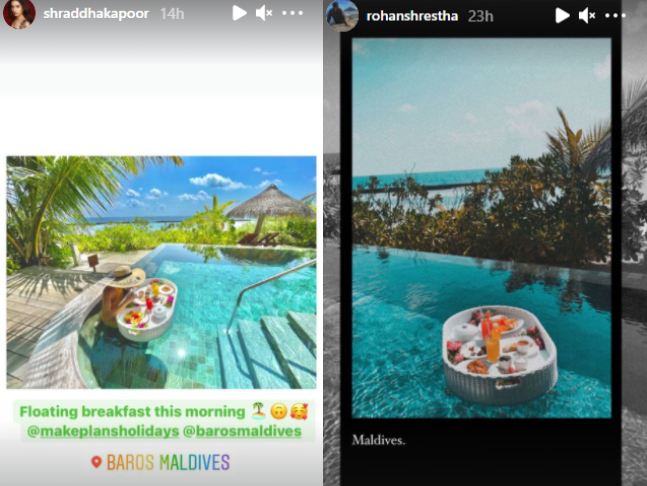 Shraddha Kapoor is currently holidaying in the Maldives. This is her third trip in recent months. However, this time around she is not attending her cousin’s wedding nor is she accompanied by her parents but having a romantic getaway with rumoured boyfriend Rohan Shrestha. Although, the actress has been careful to post solo pictures from the resort all through the week, a similar looking breakfast tray and same locales gave their destination away.

Rahul Dravid gets a partner-in-crime in Deepika Padukone; turns out sh

Rahul Dravid's angry avatar in his new ad takes the internet by storm, Virat Kohli says 'Never seen this side of bhai'

Babil Khan breaks down while accepting father Irrfan's award, says 'you and I are going to make this journey together'

Wish to achieve a flawless glam like Erica Fernandes? The secret lies in THIS little skin routine prep step!