Mandira Bedi has slammed the online trolls who passed insensitive and derogatory comments about her adopted daughter. Mandira on Monday took to Instagram Stories to share screenshots of direct messages that she received from a few people who made scathing remarks about her daughter Tara’s looks and her roots, whom she had adopted last year.

“Madam from which slumdog centre did you adopt your prop daughter?” one person wrote. Another commented, “The adopted street kid looks completely out of place…u greedy narcissists are scarring the slumdog for life.” Sharing a screenshot of the first message, Mandira wrote, “People like this need to be given a special mention @bollywoodforevaa. You got my attention, you piece of s**t.” To the second person, she wrote, “More from the model citizen. He calls himself Rajesh Tripathi, which definitely isn’t his name because sickos like this are the biggest cowards too, who only know how to wag their tongues behind the shield of anonymity.” 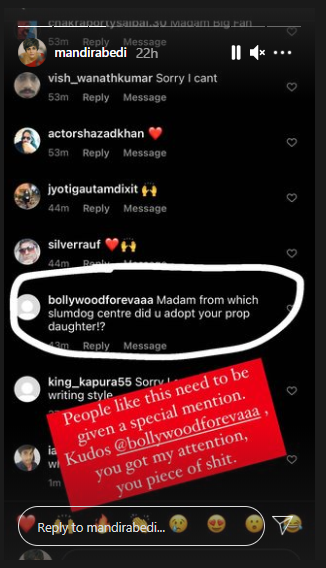 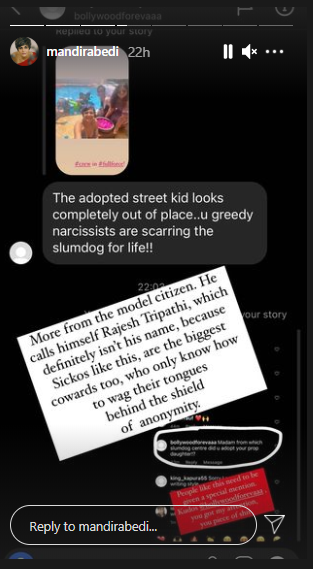 Mandira and her husband filmmaker Raj Kaushal had adopted their four-year-old daughter last year in July 2020, but announced it in October. Sharing a family picture with their son Vir, Mandira had written, “She has come to us like a blessing from above, our little girl, Tara. Four years and a bit with eyes that sparkle like stars, sister to her Vir. Welcoming her home with open arms and pure love. Grateful, thankful. blessed…Tara Bedi Kaushal became a part of our family on 28th July 2020.”

Raj and Mandira had welcomed their biological son Vir in June 2011.