The makers of Akshay Kumar’s film Bellbottom have released a statement quashing all media reports about the film’s release. The Vashu Bhagnani’s and Jackky Bhagnani’s production house has asked fans and followers to not believe any reports about the impending release date or the film resorting to a digital release.

Recent reports claimed the makers have initiated talks with Disney+ Hotstar for an exclusive digital premiere. The same reports pegged the deal in the vicinity of Rs. 150 crores. 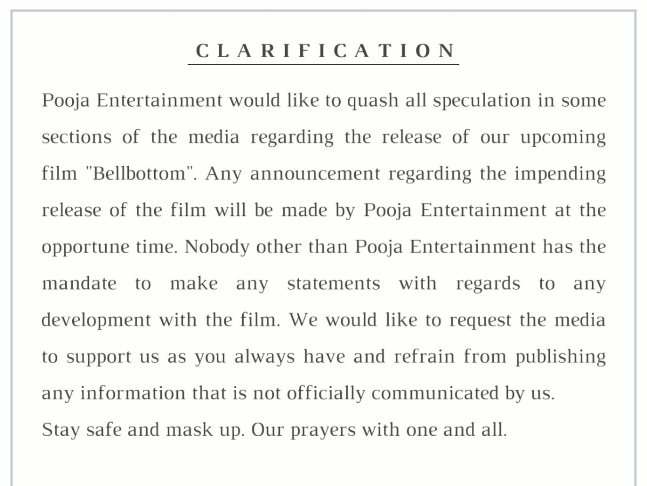 The statement read, "Pooja Entertainment would like to quash all speculation in some sections of the media regarding the release of our upcoming film Bellbottom. Any announcement regarding the impending release of the film will be made by Pooja Entertainment at the opportune time. Nobody other than Pooja Entertainment has the mandate to make any statements with regards to any development with the film. We would like to request the media to support us as you always have and refrain from publishing any information that is not officially communicated by us. Stay safe and mask up. Our prayers with one and all."

Bellbottom is a spy thriller set in the ‘80s. The film also stars Lara Dutta, Huma Qureshi and Vaani Kapoor.