Advertisement
HomeBOLLYWOODENTERTAINMENT NEWSArjun Kapoor says he can't be 'okay' with dad Boney leaving his mom for Sridevi, but can 'understand' it

Arjun Kapoor says he can't be 'okay' with dad Boney leaving his mom for Sridevi, but can 'understand' it

Arjun Kapoor has talked about his father Boney Kapoor's second marriage with late legendary actress Sridevi. He said he understands why his father Boney fell in love with Sridevi and that 'love is complex'. In a recent interview, Arjun opened up about his relationship with Boney and how it changed over the course of time.

Boney was married to Mona Shourie when he began a relationship with Sridevi. After Sridevi's death in 2018, Arjun was seen standing by Boney and his daughters with Sridevi - Janhvi Kapoor-Khushi Kapoor, giving them emotional support. He told a Bollywood website, "My mother's upbringing came in my head. She would've told me to be by my father's side regardless of what obstacles we face, because of a choice he made where he fell in love. And I respect my father for falling in love again. Because love is complex. And we would be silly and churlish sitting here in 2021 saying that you only fall in love once. It's very Bollywood-ised. Love is complex, love is complicated, love isn't always about being in love." 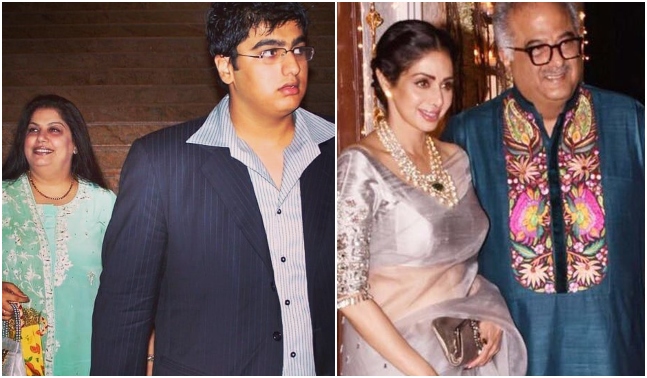 He added, "It's about compatibility, there is friendship, there is saturation. There is unfortunate frustration, people go through different phases in life. You could have been in love with somebody, and you can fall in love with somebody after that, and that has to be understood. I don't agree... I can't say I'm okay with what my father did, because as a child I felt the repercussions, but I understand it. I can't say 'theek hai, hota hai (It's fine, these things happen)', because I will always wonder. But when I rationalise it as an older person who's dealing with his own relationship highs and lows, you understand."