Alia Bhatt and Ranbir Kapoor were last spotted together in a live session on Instagram for a brief moment. It's been a while they were snapped together but their mothers, Soni Razdan and Neetu Kapoor are having a good time together. On Friday, Ranbir's mother, veteran actor Neetu Kapoor, shared a picture from her get-together with friends, including Alia's mother Soni Razdan.

Neetu took to her Instagram story and offered a glimpse of her fun evening with her girls. The picture also featured Anu Ranjan. Flashing their precious smiles, the ladies looked all thing beautiful. Along with the selfie, Neetu also put dancing girls GIF. 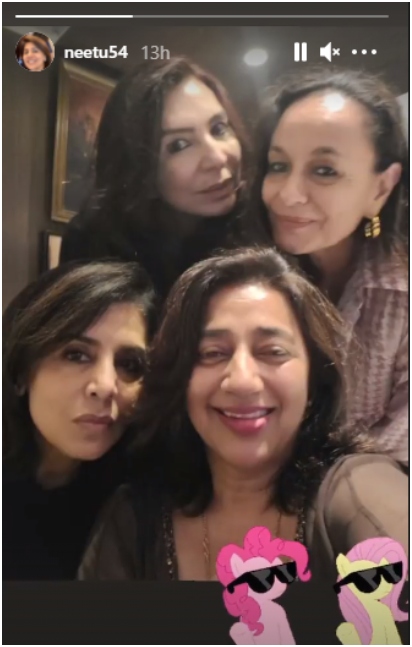 Neetu Kapoor and Soni Razdan are family friends and are often seen spending time together. Alia's and Ranbir’s families were also seen enjoying their New Year’s holiday together in Ranthambore.

Neetu Kapoor had earlier talked about having some privacy away from children Ranbir and Riddhima Kapoor Sahni and not living with them. The veteran actress had said she is used to this way of life and expects her kids to 'stay connected'. Speaking with a leading magazine, the actor had said, "I want them to be busy with their lives. I say mere dil mein raho, mere sar pe mat chadho (stay in my heart, don’t stand on my head). When Riddhima was with me for the pandemic, I was so stressed for one year because she couldn’t go back. I used to get so restless. I used to tell her Riddhima to go back, Bharat is alone. I was literally pushing her away. I like my privacy. I am used to this way of life."