The Delhi High Court today dismissed the lawsuit filed by Juhi Chawla against the setting up of 5G wireless networks in the country. The Court order said that Juhi abused the process of law and imposed a fine of Rs 20 lakhs on the plaintiffs. In its order, the Delhi High Court said that "it appears that the suit was for publicity". It said Juhi circulated the link of the hearing on social media which created disruption thrice. "Delhi Police shall identify the persons and take action against those who created disruption," the court added.

However, in her plea and a press release, Juhi had sought a direction to the authorities to certify to public that the 5G technology is safe to humans, animals, birds, and every type of living organism, flora and fauna. Juhi in her press statement clarified, “There seems to be a general misconception , that our present  suit filed in the Hon’ble Delhi High Court is against 5G technology . We wish to clarify here and once again very clearly state , we are NOT against 5G technology. However we seek from the Government and the governing authorities , to certify to us  and, therefore,to the public at large, that 5G technology is safe to humankind, man, woman, adult, child, infant, animals and every type of living organism, to flora, and to fauna.”

Delhi High Court dismisses the lawsuit filed by actor-environmentalist Juhi Chawla against the setting up of 5G wireless networks in the country. The Court order said that the plaintiffs abused the process of law, imposes a fine of Rs 20 lakhs pic.twitter.com/YvhwNoZtRg

Delhi High Court in its order said it appears that the suit was for publicity. Plaintiff Juhi Chawla circulated the link of the hearing on social media which created disruption thrice. Delhi Police shall identify the persons and take action against those who created disruption

She further reiterated, “Having written to several concerned government authorities , since 2010 , making a presentation to the 53rd Parliamentary Standing  Committee 2013 -2014 , filing a Public Interest Litigation  (PIL ) in the Mumbai High Court 2015 , found there has been no substantial movement in the EMF radiation matters ,whatsoever. In 2019 , on enquiring from the Ministry of Telecommunications , Government of India, I was informed in writing vide reply under the RTI Act that no studies have been conducted with regards to  RF radiation , even as of today . Since prevention is well-accepted to be far better than cure, immediate measures must be taken to protect humanity and the environment, & for which all I am asking is to the concerned authorities to show me the Data. 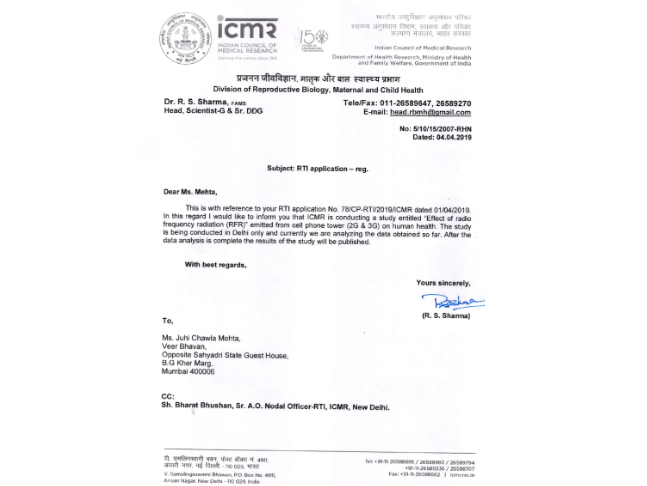 However, during the first hearing, the court termed the suit as ‘defective’ and questioned Juhi’s counsel for filing the suit without giving any representation to the government on her concerns related to the technology. The court said that Chawla and others were required to first approach the government for their rights instead of approaching it. The counsel, appearing for the Centre, said the 5G policy did not fall in the category of public nuisance and it is obviously not prohibited in law. The counsel representing private telecom companies said that launching of 5G technology is a policy of the government and as it is a policy, it cannot be a wrongful act.

According to PTI, Chawla's counsel had argued that if the telecom industry’s plans for 5G come to fruition, no person, animal, bird, insect and plant on earth will be able to avoid exposure, 24 hours a day, 365 days a year, to levels of RF radiation that are 10x to 100x times greater than what exists today.