Popular filmmaker Karan Johar would arrive on television every Sunday night with his cup of brewing coffee and of course hot gossips with his chat show, Koffee With Karan. The show has always been the talk of the town for attention-grabbing statements made by Bollywood celebrities. But we ain't complaining. Now, after nearly 2 years, it seems Karan is gearing up to return with Koffee With Karan Season 7.

While there is no official confirmation, Karan dropped in a major hint on his Instagram stories today. He left fans of Koffee With Karan curious by sharing a picture of coffee that had his face drawn on it. As he sipped hot coffee with cookies, Karan asked, "Karan on Koffee! Season?" Koffee With Karan Season 6 premiered in 2018 and ended in March 2019. 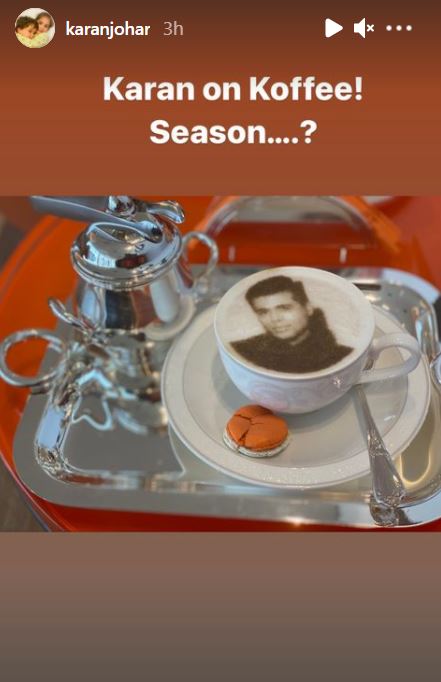 Recommended Read: Karan Johar wishes to bring Vicky Kaushal and Katrina Kaif together on Koffee With Karan, says, 'there is so much conjecture about them'

In June 2020, Karan had expressed his desire to bring Vicky Kaushal and Katrina Kaif together in the next season Koffee With Karan. He had told, "Vicky and Katrina… There is so much conjecture about them. In fact, Ranveer and Deepika haven’t been together. It will be lovely to have them. There are lots of couples. There is a whole young gen that is all over so it would be lovely to get lots of them. Sid and Kiara… There are so many rumour mills that are buzzing. They look great together. These are all gorgeous looking couples." Well, it seems the dream will be fulfilled soon!