Sanjay Dutt's daughter Trishala Dutt recently spoke about tackling judgemental people. The star kid has said that she has been judged since she was born owing to her family name. However, she mentioned how people who judge others are usually the ones who are 'feeling down, unhappy, lost, and disconnected from themselves'.

An Instagram user asked Trishala how she deals with 'so many people' judging her. She responded saying, "I've had people judging me since the day I took my first breath lol it comes with the family name, unfortunately." Trishala then shared a different perspective on people who pass judgments. 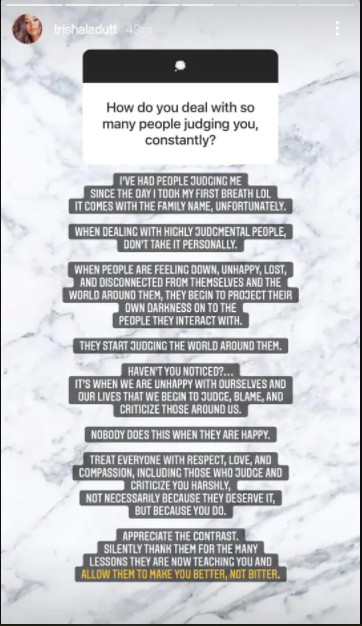 Recommended Read: Trishala Dutt opens up about father Sanjay Dutt's drug addiction, says 'It's a disease he has to fight every single day'

"When dealing with highly judgemental people, don't take it personally. When people are feeling down, unhappy, lost, and disconnected from themselves and the world around them, they begin to project their own darkness onto the people they interact with. They start judging the world around them," she said.

"Haven't you noticed? It's when we are unhappy with ourselves and our lives that we begin to judge, blame, and criticize those around us. Nobody does this when they are happy. Treat everyone with respect, love, and compassion, including those (who) judge and criticize you harshly, not necessarily because they deserve it, but because you do. Appreciate the contrast. Silently thank them for the many lessons they are now teaching you and allow them to make you better, not bitter," she added.

Trishala is extremely vocal about mental health issues as well. She often answers fan questions on Instagram. A few month back, Trishala had talked about her father's past drug addiction as well.