Troubles for Trinamool Congress MP and actress Nusrat Jahan don't seem to end. After claiming that her marriage with Nikhil Jain was null and void, Nusrat found herself in the garb of problems. Now, BJP MP Sanghamitra Maurya has filed a complaint against Nusrat for proving 'deliberate false and misleading information' in her affidavit in Parliament. Writing a letter to Lok Sabha Speaker Om Birla, Maurya said the TMC MP is bringing back reputation to the Parliament and its MPs.

In her letter, Maurya wrote, "In her recent media statement regarding her marital status implies that Nusrat Jahan deliberately provided false information to the Lok Sabha Secretariat, thereby indulging in illegal unethical and immoral conduct. This tantamounts to cheating her electorate by providing deliberate false and misleading information and also bringing bad reputation to Parliament and its honourable MPs." 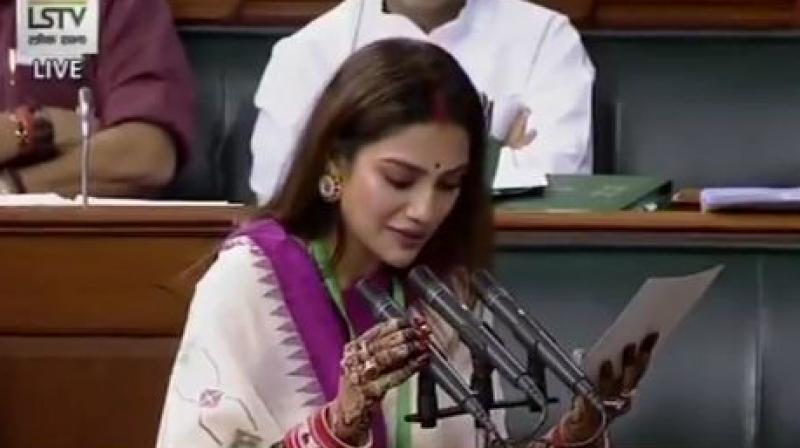 The letter further read, "Her media statement regarding her marital status controvert her oath for Lok Sabha membership wherein she took oath as Nusrat Jahan Ruhi Jain. This effectively renders her membership as non-est in law."

Nusrat Jahan took oath as a Lok Sabha MP on June 25, 2019. She said her name was Nusrat Jahan Ruhi Jain and was dressed as a new bride with ‘sindoor’. Earlier this month, Nusrat issued a statement saying her marriage with Nikhil was never valid as an interfaith marriage in India has to be registered under the Special Marriage Act, which never happened and so the question of divorce doesn't arise. The TMC MP married the Kolkata-based businessman in June 2019 in Turkey. The wedding ceremony was conducted according to the Turkish Marriage Regulation. West Bengal Chief Minister Mamata Banerjee attended her wedding reception.