Advertisement
HomeBOLLYWOODENTERTAINMENT NEWSNick Jonas shares then and now pictures of wife Priyanka Chopra Jonas on her birthday, says 'You deserve all the happiness in the world'

Nick Jonas shares then and now pictures of wife Priyanka Chopra Jonas on her birthday, says 'You deserve all the happiness in the world'

Global star Priyanka Chopra Jonas was been conquering the globe one day at a time. Crowned as Miss World in 2000, Priyanka started her journey as an actress in Hindi films and gradually moved to the U.S. Expanding her horizon, the actress has now opened her own Indian restaurant named Sona, wrote an autobiography titled Unfinished and of course, she is a producer too. Having fans across the world, Priyanka's birthday on Sunday became more special as she received the sweetest wishes from all her well-wishers. Including husband Nick Jonas.

American pop singer Nick, who married Priyanka in 2018, celebrated his wife's birthday in a most adorable manner. He dug out a childhood picture of Priyanka from the archives in which she was dressed in a pastel pink saree. Along with that, he shared a picture of his wife wearing a similar saree for his brother Joe Jonas' wedding in 2019. He captioned it, "Happy birthday my love. You deserve all the happiness in the world. Today and every day. I love you."

Priyanka is currently in London shooting for her project titled Citadel. Nick is California. On her birthday, he sent her a gift. Priyanka shared it on her Instagram stories. 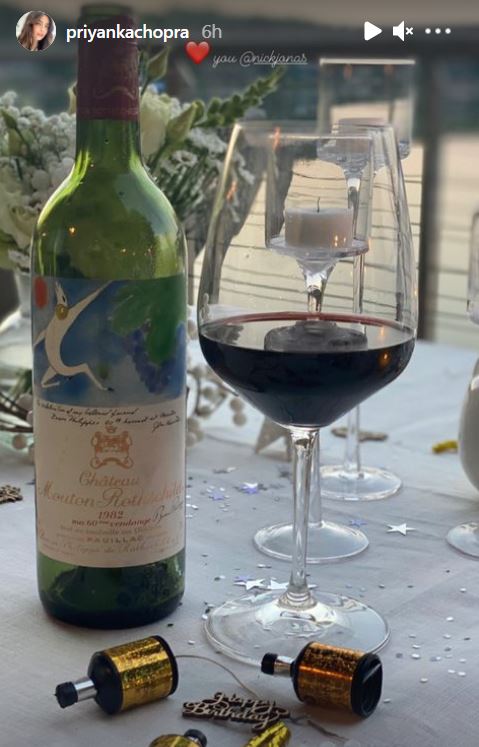 On her birthday, Priyanka shared pictures of herself in a blue monokini.