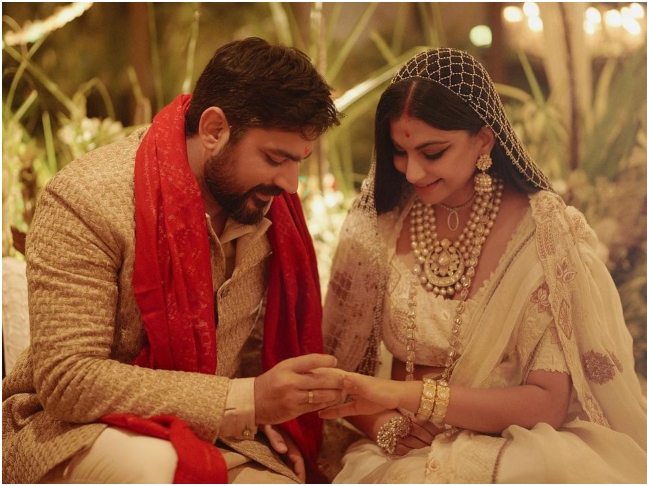 Rhea Kapoor tied the knot with her longtime boyfriend Karan Boolani on August 14 (Saturday). While her elder sister and Bollywood actress Sonam Kapoor Ahuja tied the knot with Anand Ahuja at her aunt's Bandra house back in 2018, Rhea tied the knot at her father Anil Kapoor's lavish Juhu home. Now, Rhea has shares her first wedding photo with 'best friend and the best guy ever' Karan.

The producer-stylist captioned the post as, "12 years later, I shouldn’t have been nervous or overwhelmed because you’re my best friend and the best guy ever. But I cried and shook and had stomach flips all the way through because I didn’t know how humbling the experience would be. I’ll always be that girl who had to come home to juhu at 11 pm before my parents fell asleep. Only until now I didn’t know how lucky I was to feel torn. I hope we make a family so close that we have many, many loves of our life. Mine are @karanboolani @anilskapoor @kapoor.sunita @sonamkapoor and @harshvarrdhankapoor forever more. "

Karan shared another unseen photo from the ceremony and wrote, "Yesterday we made it official to the world… but you and I have been ride or die for over a decade and for that i would like to thank four people who have given me a crazy amount of love, respect, encouragement and constant collaboration. First is a film producer, the second is a fashion stylist.. the third is the mother of my daughter lemon and the fourth is the finest cook to have performed miracles in a domestic kitchen..and their names are Rhea Kapoor. To the best decision I’ve ever made. Here's to us and everything that awaits us together "

Anil also shared the same photo alongside a family photo and captioned it as, "And with that, I feel like my Magnum Opus is complete...with our 2 super-daughters and 3 super-sons, we have the biggest blockbuster ever! Our hearts are full and our family is blessed "