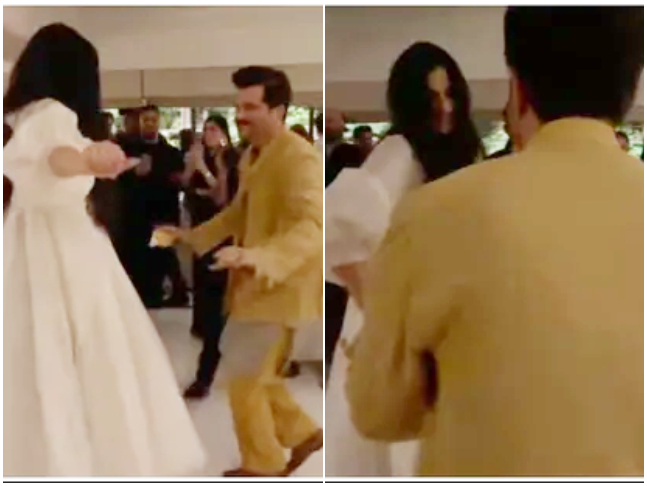 Anil Kapoor’s younger daughter Rhea Kapoor made it official by getting married to her longtime beau Karan Boolani on Saturday. Last evening, the father of the bride, Anil hosted an intimate wedding party for the newlyweds that was attended by their Kapoor Khandaan as well as several close friends.

Farah Khan who was one of the invitees at the wedding party gave a glimpse of the adorable father-daughter duo of Anil and Rhea dancing to Sonam Kapoor’s Abhi Toh Party Shuru Hui Hai. In the video, Anil can be seen wearing a mustard jacket over a grey kurta and paired it with matching pants. Rhea wore a white puffed sleeve dress as with her hair open. Her husband Karan could be seen sitting on the sofa in the video and clapping as Anil and Rhea danced.

RECOMMENDED READ: Farah Khan poses with ‘Father of the Bride’ Anil Kapoor and other inside pictures from Rhea Kapoor and Karan Boolani’s wedding bash

Rhea is a producer and stylist and has co-produced films like Aisha, Khoobsurat and Veere Di Wedding. Rhea started dating Karan after they met during the making of Aisha in 2009.