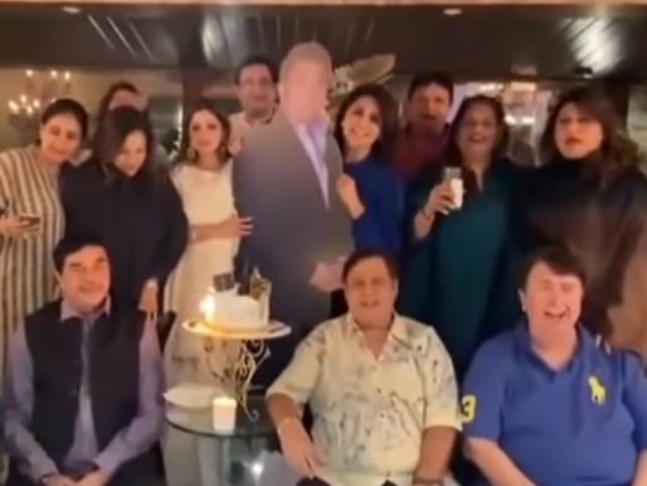 Rishi Kapoor would have celebrated his 69th birthday yesterday with his loving family. But the actor left for his heavenly abode in April 2020. The Kapoor family is keeping him alive in their hearts with his priceless memories. On the veteran actor's birth anniversary yesterday, his wife Neetu Kapoor hosted a party to celebrate him and the legacy he left behind.

Neetu turned host for the party and invited her brother-in-law Randhir Kapoor and industry friends like David Dhawan, Shatrughan Sinha and Rumy Jafry. Rishi Kapoor, too, was present at the bash, but in the form of a life-size cutout. A cake with ‘Happy Birthday Chintu’ written on it was ordered. Neetu shared a video of the group singing happy birthday for the late actor.

Recommended Read: 'I learnt a lot from Rishi Ji during our last few traumatic years in NYC,' says Neetu Kapoor on the actor's 69th birth anniversary

On Rishi Kapoor's birth anniversary, Neetu shared a throwback picture and wrote, "I learnt a lot from Rishi Ji during our last few traumatic years in NYC .. how we celebrated when his blood counts were high .. we dined shopped laughed .. in his lows we just stayed home watched tv ordered in amazing food n still had some wonderful moments in hope that the next round of chemotherapy he would be better .. hope n being strong is what he taught me .. value each day .. we all miss him today !!! I can picture him how excited he would have been for his 69th birthday !! I’m sure he is celebrating with his family up there Happy birthday Kapoor Saab."