On Thursday, Indian Cricket team captain Virat Kohli announced his decision to step down from the captainship of T20Is team after the completion of the upcoming ICC T20 World Cup. The ICC T20 World Cup is scheduled to take place in UAE and Oman from October 17 to November 14. According to reports, Rohit Sharma might take over as captain from Virat in T20Is after the World Cup.

Many celebrities and fans reacted to Virat's decision. Including his wife Anushka Sharma. Anushka shared Virat's Instagram post on her Instagram stories. Supporting his decision, the actress used a heart emoji. Anushka and Virat are currently in Dubai for the second leg of IPL 2021. 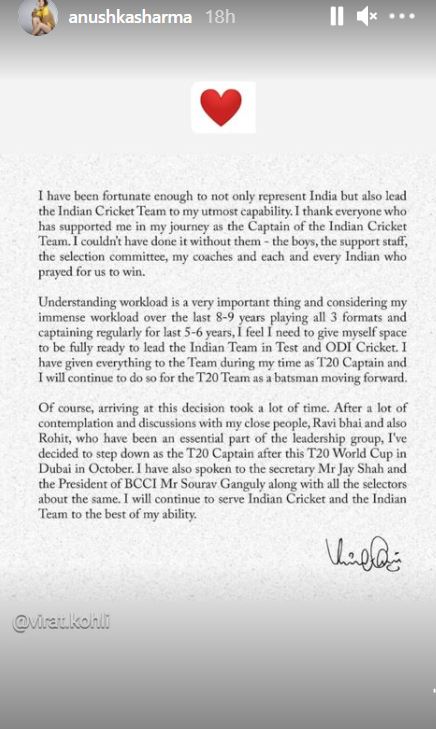 Recommended Read: Virat Kohli to step down as India’s T20Is captain after ICC T20 World Cup, will continue leading the team in other formats

Anushka and Virat tied the knot in Tuscany, Italy in 2017 with only family members in attendance. They welcomed their first child, daughter Vamika, on January 11 this year.

'It is a personal opinion, it's very subjective,' says Shoojit Sircar on Vicky Kaushal's Sardar Udham not being selected for Oscars because of 'projecting hatred towards the British'

Did Shilpa Shetty fulfill 'mannat' for Raj Kundra's bail by getting an undercut hairstyle?