Advertisement
HomeBOLLYWOODENTERTAINMENT NEWSK-Drama stan or a Bollywood buff? Find out what type of Netflix fan are you with its epic fandom event at TUDUM!

Counting down the days until the new season of Stranger Things launches. Live-tweeting every episode of your favorite K-drama because you just have so many feelings. Organizing online watch parties with all your friends so you can stream your favorite shows together. If any of this sounds like you, then you’re definitely a Netflix fan through and through. Here in Asia, fandom is everywhere! We always love our K-content, we’re excited about anime and bringing them to life with cosplay, grip our seat handles as we watch Bollywood dramas, and watch our favorite blockbusters with the entire family. Asians are passionate, enthusiastic, and most of all, proud to see our stories on the global stage.

And to celebrate fandom in all its forms, Netflix is hosting the ultimate global fan experience: TUDUM, an epic virtual event that brings together Netflix’s biggest stars and creators from around the world on September 25. Read on to find out what type of fan you are and discover all the exclusive sneak peeks, first-looks, and announcements at TUDUM just for YOU. 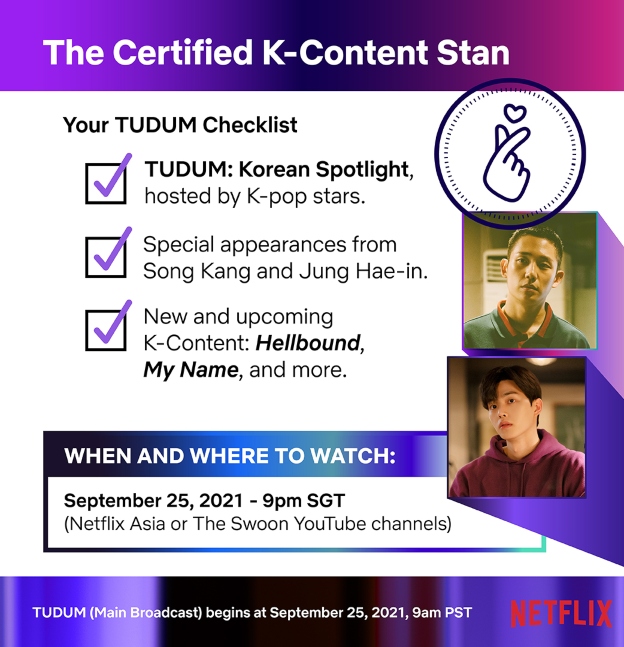 You keep track of every new show and film of your favorite Korean stars, tell all your friends about your K-drama recos, and get excited whenever a K-pop star is in a heart-fluttering drama. Then look no further, because the TUDUM: Korean Spotlight panel is just for you. Your beloved K-pop star will be hosting this special program! You’ll also get a first glimpse at all the exciting K-titles coming to Netflix, from Hellbound, My Name and more. Plus, stars like Song Kang and Jung Hae-in are slated to make special appearances at TUDUM. 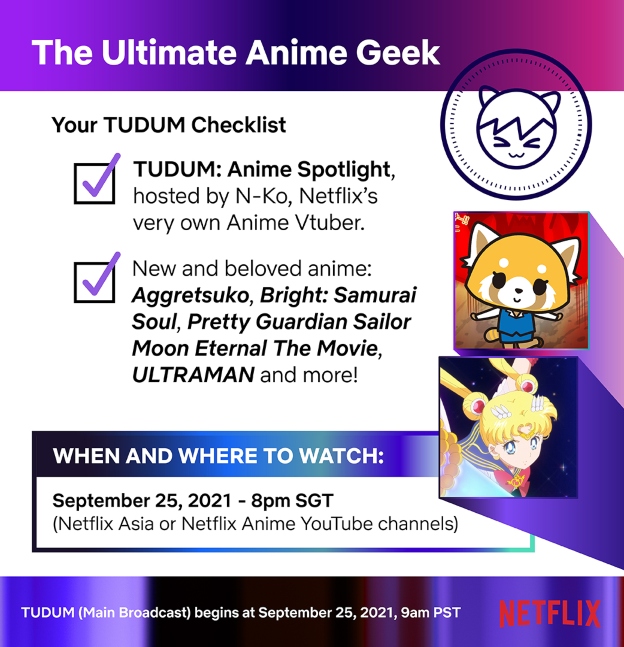 You chose anime life because you love how every scene is written and animated to perfection. You live for the over-the-top visuals, flashy fight sequences, and epic costume changes. Your friends never fail to ask you for recommendations, based on your years of watching anime and reading manga. If this is you, then TUDUM: Anime Spotlight is something you should look forward to!  Embark on an adventure with N-Ko, Netflix’s very own Anime Vtuber, to check out Aggretsuko, Bright: Samurai Soul, Pretty Guardian Sailor Moon Eternal The Movie, ULTRAMAN and other amazing anime that Netflix has in store for all Anime fans! 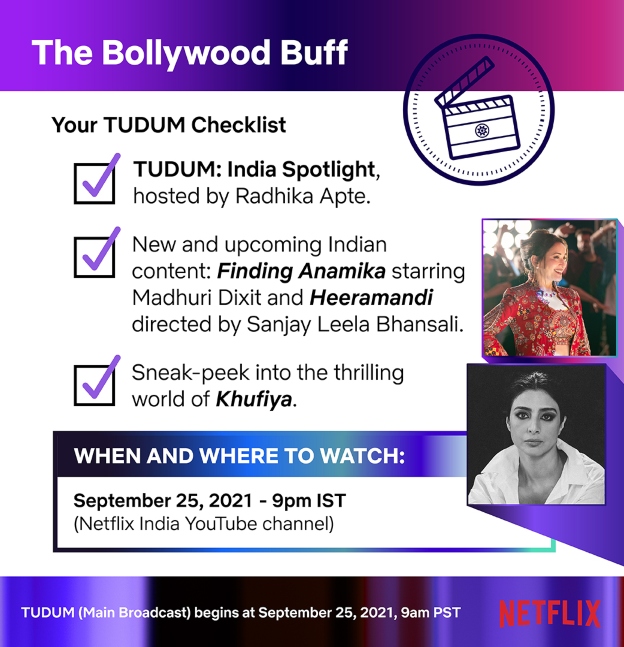 You love content from all over the world, but Bollywood is where it’s at for you! You can’t get enough of the eye-popping visuals, the hypnotic song-and-dance numbers, and the one-of-a-kind storytelling that only India can offer. Stay tuned for the TUDUM: India Spotlight, where you will witness Madhuri Dixit in a never-seen-before role in Finding Anamika, along with acclaimed filmmaker Sanjay Leela Bhansali who will discuss his vision for his first-ever series, Heeramandi.  Catch a sneak-peek into the thrilling world of Vishal Bharadwaj’s Khufiya starring Tabu and  Ali Fazal. 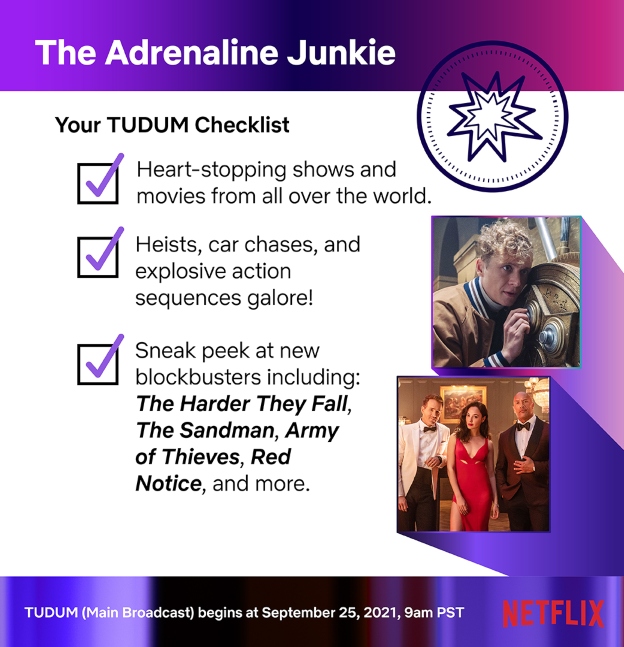 You like your Netflix Films pumped full of adrenaline. You enjoy globe-trotting stories with explosive action sequences and watching frantic car chases gets your heart racing. For all the thrill-seekers out there, TUDUM has plenty of blockbusters in store. See the Wild West in a new light with The Harder They Fall, get a first glimpse at Neil Gaiman’s The Sandman, and go on an exciting heist with the crews of Red Notice and Army of Thieves. 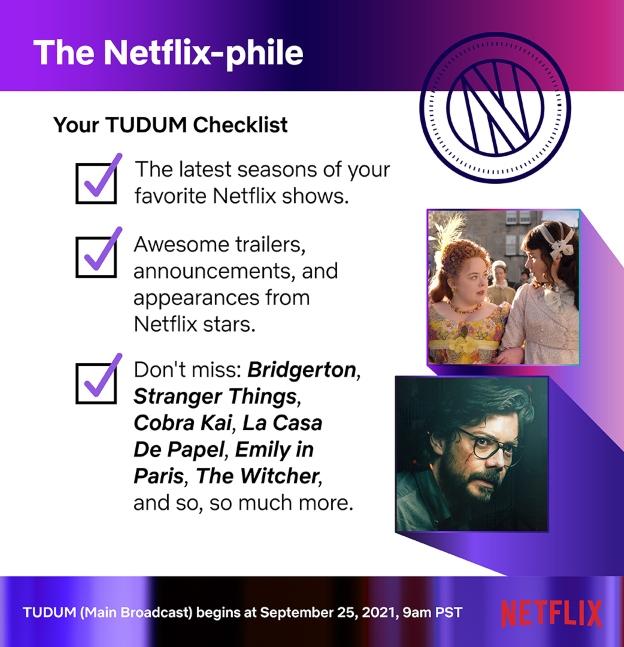 Admit it: you live, breathe, and watch all things Netflix — and we don’t blame you! In fact, you’re probably the one who set up Netflix on your family’s TV and the first person your parents call when they can’t figure out how to change the subtitles. And because you’re a certified Netflix fan, you’re up-to-date on the latest and greatest of Netflix’s library. TUDUM is practically a buffet for you — you’ll get EVERYTHING, sneak peeks of the latest seasons of all your favorite shows: Bridgerton, Stranger Things, Cobra Kai, La Casa De Papel, Emily in Paris, The Witcher, and so, so much more. And did we mention that there will be new show announcements headed your way, too? 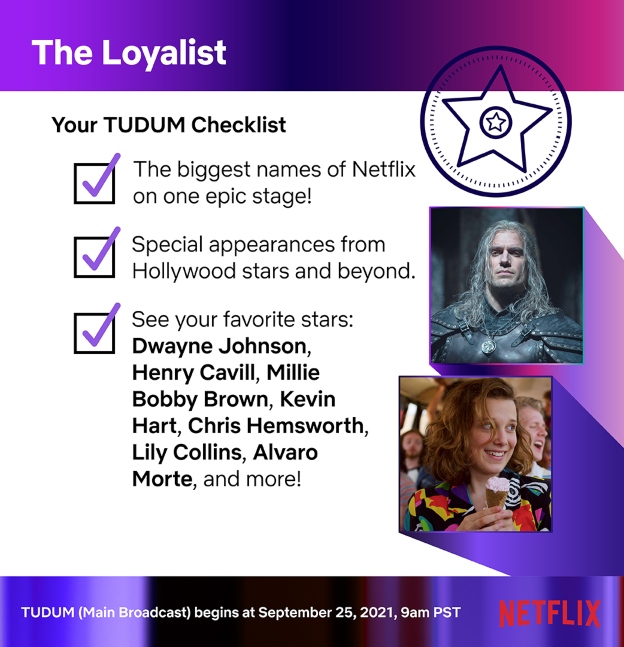 When it comes to your favorite stars, nothing gets past you. And because you love them so much, you just can’t keep a good show or movie to yourself. You’ll pretty much watch anything they’re in to show your support, and you’ll get your friends and family to join in on the fun and watch alongside you.So if you love all things Hollywood and beyond, TUDUM will feature the biggest stars of Netflix, including: Dwayne Johnson. Henry Cavill. Millie Bobby Brown. Kevin Hart. Chris Hemsworth. Lily Collins. Alvaro Morte. Need we say more?

When and where to watch TUDUM

The three-hour Netflix TUDUM virtual event will premiere on September 26 at 12 am SGT. There will also be special TUDUM: Spotlights beginning on September 25 at 8pm SGT.

TUDUM will be made available across Netflix YouTube channels worldwide, in a number of different languages, as well as Twitter and Twitch.

In Asia, it will be available in the localized YouTube streams below: