Advertisement
HomeBOLLYWOODENTERTAINMENT NEWSWatch: Cricketer Deepak Chahar proposes to girlfriend Jaya Bharadwaj at the cricket stadium, gets doused in cake by skipper MS Dhoni and teammates after the match

Watch: Cricketer Deepak Chahar proposes to girlfriend Jaya Bharadwaj at the cricket stadium, gets doused in cake by skipper MS Dhoni and teammates after the match 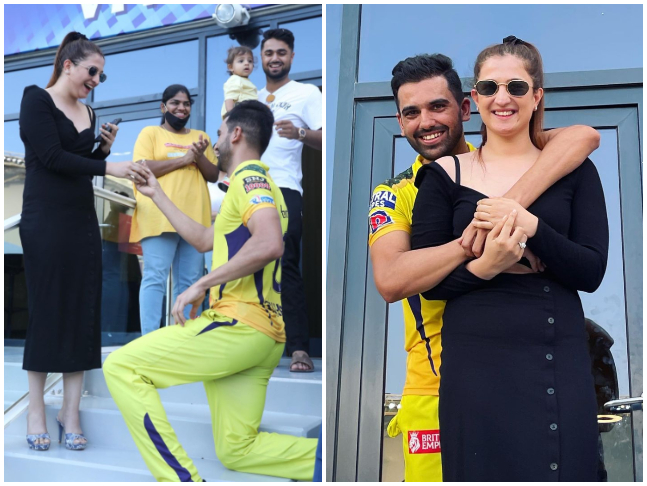 Deepak Chahar proposed to his girlfriend Jaya Bharadwaj after Chennai Super Kings’ (CSK) final league match in the ongoing Indian Premier League (IPL) 2021 season on Thursday. Although the team lost their third match on the bounce as Punjab Kings (PBKS) handed them a resounding defeat, there was jubilation in the team because of Chahar’s proposal. Chahar got down on one knee in the stands at the Dubai International Cricket Stadium, taking his girlfriend completely by surprise. She proceeded to say ‘yes’ to the proposal.

Chahar shared a video of the proposal on his Instagram account and captioned it, “Special moment,” accompanied by a red heart emoji. The celebrations continued after Chahar and Jaya proceeded to the hotel with the entire CSK contingent.

The newly betrothed couple was made to cut a cake at the hotel. However, as soon as the pair cut the cake and fed each other, CSK skipper MS Dhoni took hold of Chahar from behind, while Krishnappa Gowtham got hold of his legs as the likes of Suresh Raina, Ravindra Jadeja, Robin Uthappa and others not only doused him in cake but also poured some beverage all over him. Jaya was plastered with cake by Dhoni’s wife Sakshi Dhoni and other cricket WAGS, while Ziva Dhoni and Gracia Raina hugged her.

After the mayhem, the skipper and his boy swiftly made a quick getaway. The whole escapade made for a great viewing as fans lavished love on the couple and their favourite IPL team.