Akshay Kumar and Katrina Kaif's Sooryavanshi is finally releasing in theatres on November 5. With just 11 days left, the actors along with director Rohit Shetty started promoting the actioner in the city. During Sooryavanshi's promotions, Katrina showed how 'excited' Akshay and Rohit are for the film.

In a video on Instagram, Katrina recorded Akshay, who was resting on Rohit's lap. The actress went closer to them. A sleep Akshay asked Katrina to not record him. She can be heard saying, "Arre if you wake up at 5 in the morning, you are going to feel tired." When the actress didn't press stop, the superstar immediately got up and ran away with Rohit saying, "We have a reputation." In a hurry to save his 'reputation', Akshay tripped and fell down.

Katrina's caption read: "Just look at the excitement of the boys for our first day promotions together." Reacting to Katrina's video, Akshay commented, "Waiting for #Sooryavanshi for a year and a half now, a few moments of peace toh banta hai nah! But pranksters like you clearly want trouble @katrinakaif. No worries, #AaRahiHaiPolice" 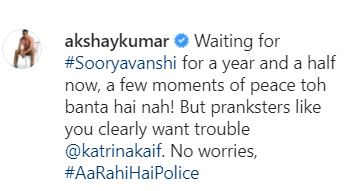