Katrina Kaif and Vicky Kaushal’s relationship may have been hush-hush and the couple never went out to announce their wedding date but their married life is full of social media PDA giving a reason to their countless fans a reason to celebrate. The newlyweds who tied the knot on December 9 . The star couple, who got married in big, fat Punjabi wedding in Sawai Madhopur, Rajasthan earlier this month, have been sharing adorable posts on their social media accounts. Today, Katrina gave a glimpse of her marital abode with Vicky that has made us go all mushy.

Taking to her Instagram stories, Katrina shared a picture of their sea-facing apartment in Juhu with the couple holding hands and looking out to the serene waters. The picture shows Katrina’s chood clad hand clasped tightly and fondly in Vicky’s. The actress captioned the image, “Home,” with a red heart emoji. Vicky also shared the same photo but he did not write any caption. 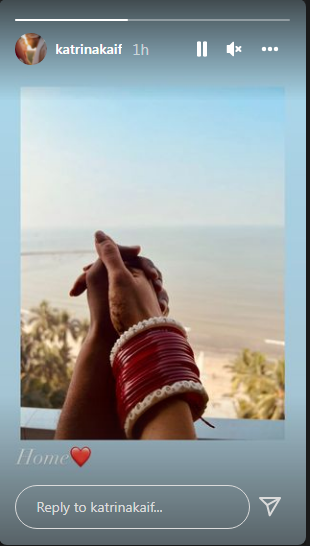 A puja was conducted yesterday at the couple’s new abode with Vicky’s parents Sham and Veena Kaushal attending the rituals. Other family members also attended the puja. Vicky and Katrina will be neighbours to Anushka Sharma and Virat Kohli in their new apartment.

‘Both Sidharth Malhotra and Arjun Kapoor are ready for marriage,’

Rajkummar Rao takes a break from his holidays to launch the trailer of 'HIT: The First Case'

Ranbir Kapoor feels 'dal chawal for life' is the best after marrying Alia Bhatt, says 'I couldn't have asked for a better partner'

'To play two distinctive characters and make them different was very challenging and exciting,’ says Ranbir Kapoor revealing his double role in Shamshera

Shamshera trailer: Ranbir Kapoor and Sanjay Dutt battle it out in an intense face-off in this period drama set during the British Raj; former essays double role for the first time