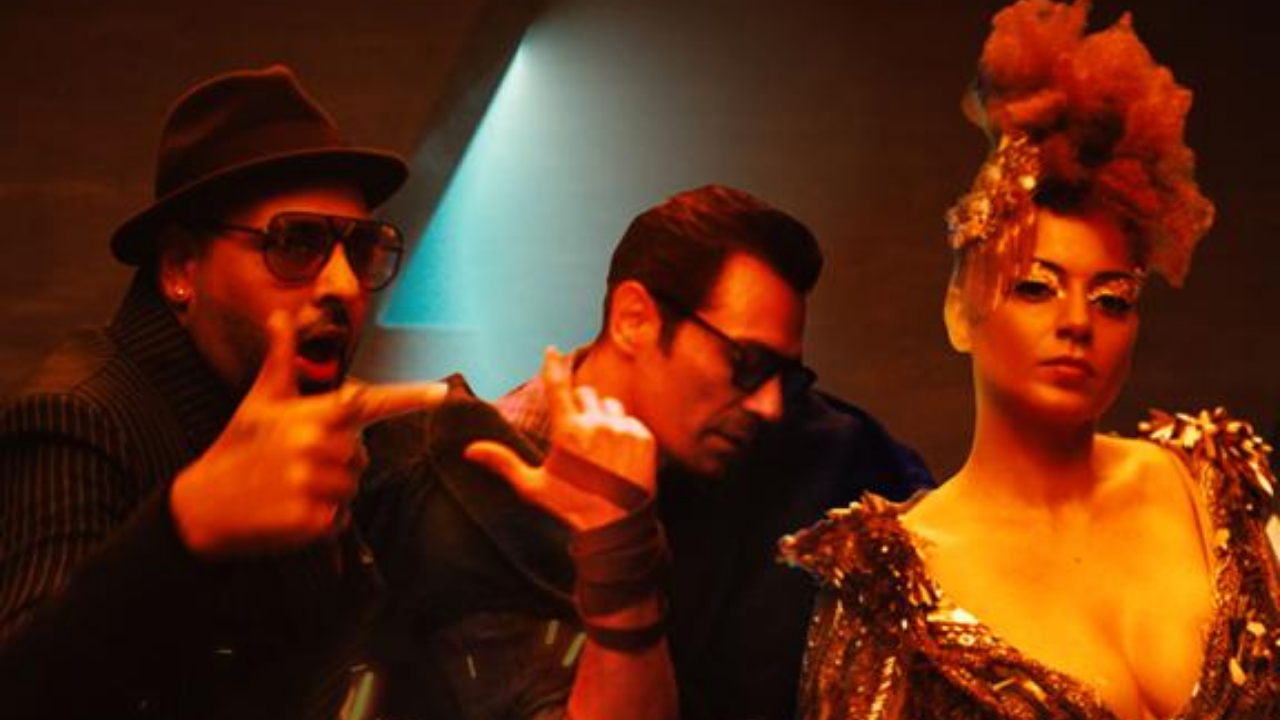 Soham Rockstar Entertainment launched the song, She’s On Fire from their upcoming action spy thriller, Dhaakad in Jaipur’s Raj Mandir theatre on Thursday. Amidst a lot cheering, leading lady, Kangana Ranaut made an entry and the sent the crowd into a tizzy. A resounding rapturous round of applause welcomed Kangana and Arjun. It was no ordinary launch. The makers set the scene by erecting a 25-feet cut out of Kangana and Arjun, which was unveiled at the event.

Along with producer Deepak Mukut and director Razneesh Ghai, the special guest who unveiled the  poster was none other than veteran film distributor Raj Bansal. The grand event at one of the most popular single screen theatres in the city saw 25 bikes being deployed to announce the arrival of the film’s star cast. Keeping with the theme of high-octane action in mind, the event was designed to highlight the film’s much-talked about action choreography which has won high praise after the film’s trailer launch recently. She’s On Fire has been composed and written by popular rapper Badshah and sung by him and Nikita Gandhi. The song has been set to tune by Hiten.

RECOMMENDED READ: ‘Producers like her are rare,’ says Nawazuddin Siddiqui refuting rumours of his Tiku Weds Sheru producer Kangana Ranaut being difficult to work with

Talking about the song Kangana Ranaut said, “It’s a song which has some great beats and highlights what Agent Agni is all about. The fire within her to destruct her enemies is very strong and the song captures her never-say-die attitude and undying spirit beautifully. We have experimented with costumes, hair and makeup and tried to do something unusual and different. I hope the song is loved by all.”

Arjun Rampal added, “Badshah is a true Badshah. With this track, She’s on Fire, he’s nailed it. The groove is addictive, the lyrics are on point. It’s the first time I had to rap and I had a blast doing it. This is the most stylish and stylised song I have shot. Kangana rocks different avatars. It was a pleasure reuniting with Remo, who had choreographed the first song of his career with me. The sets are insane, costumes are killer. This song’s on fire. She’s On Fire, is a must on everyone’s playlist.”

Director Razneesh Ghai added, “Badshah brings an infectious groove to She’s on fire. He’s got ‘Da Beat,’ the mad lyrics and it’s going to rock the nation. And, I have tried to bring a visual aesthetic that’s new to our audience. Kangana has outdone herself yet again in various avatars. If we know anything about Kangana, it’s that, she is an absolute perfectionist. Her sensuality shines bright in the entire video. The video itself is moodily futuristic and wildly imaginative. Arjun Rampal brings a slick ruthless force to the video. He is smooth, he is groomed and he is super sexy. It’s a special treat for his fan following. Remo D’Souza’s wonderful choreography embodies the soul of the song. Tetsuo Nagata, the grandmaster, brings his ever-evolving master lighting and compositions to this crazy video.”

Deepak Mukut said, “It’s a peppy and upbeat song which will appeal to the younger generation. Badshah has composed a number which reflects the battle between Kangana and Arjun’s characters in the film. What’s also important for us as a production house is that, with this film, we are also launching our music label, SRE Music. I hope the song is loved by everyone.”

Soham Rockstar Entertainment presents Dhaakad which is produced by Deepak Mukut and Sohel Maklai and co-produced by Hunar Mukut. The film is directed by Razneesh Ghai and produced in association with Zee Studios, Kamal Mukut, Sohel Maklai Productions and Asylum films. Dhaakad’s music is produced under the banner of SRE Music, the film is distributed by Zee Studios Worldwide and will release on May 20, 2022.