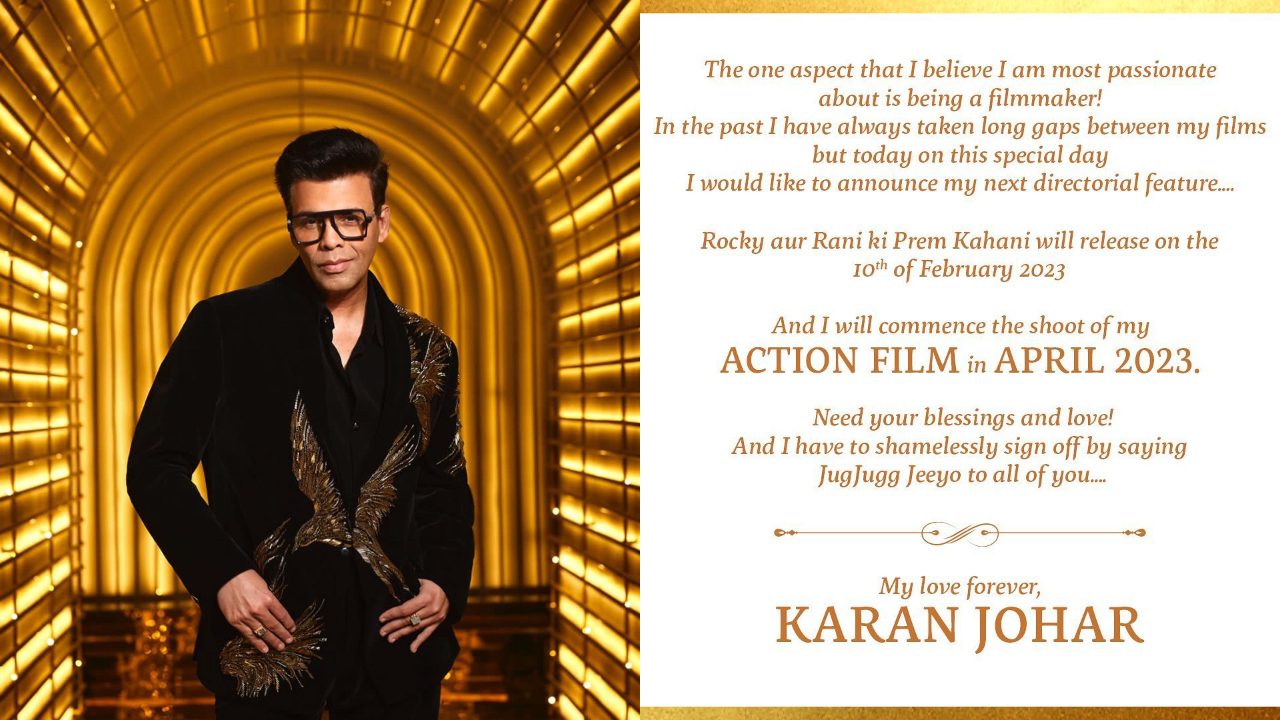 Karan Johar is celebrating his 50th birthday today. On this special day he took to social media to make a special announcement. He announced his next directorial venture – his first action film to commence shoot as soon as Rocky Aur Rani Ki Prem Kahani releases on February 10, 2023. KJo, wrote that previously he had taken long gaps between his directorial ventures but this time around after the release of Rocky Aur Rani Ki Prem Kahani in February, he will straightaway nose dive into the work of his action film in April 2023.

Taking to social media, KJo penned an emotional note thanking his fans, friends and even naysayers which helped him grow as a person. He wrote, “Hello all, This is a note of reflection and one of immense excitement! I turn 50 today (a number that seemed like a distant nightmare), while I know it’s kind of a mid-point of my life but I can’t help my wannabe millennial self from existing. Some call it a mid-life crisis, I proudly call it just ‘living life without any apologies’. I have worked in the movie industry for 27 years and I’m blessed to have had the best experience ever!!! Telling stories, creating content, nurturing talent and watching the finest artists perform in front of my privileged eyes…these years are like being  in a massive dream that made all the sleeplessness seem worthwhile! I am grateful for the brickats, the bouquets, the praising souls, the public trolls…All of IT!!! It’s been a huge part of my learning curve and self growth…”

RECOMMENDE READ: Alia Bhatt pens an emotional note for Karan Johar on his 50th birthday, calls him ‘my father, my best friend and my mentor’

He further wrote, “The one aspect that I believe I am most passionate about is being a filmmaker! In the past I have always taken long gaps between my films but today on this special day I would like to announce my next directorial feature…Rocky Aur Rani Ki Prem Kahani will release on the 10th of February 2023. And I will commence the shoot of my Action film in April 2023. Need your blessings and love! And I have to shamelessly sign off by saying Jug Jugg Jeeyo to all of you…My love forever, Karan Johar (sic)”

Meanwhile KJo is all set to host a big birthday bash at Yash Raj Studios tonight with all the big celebrities attending the event.