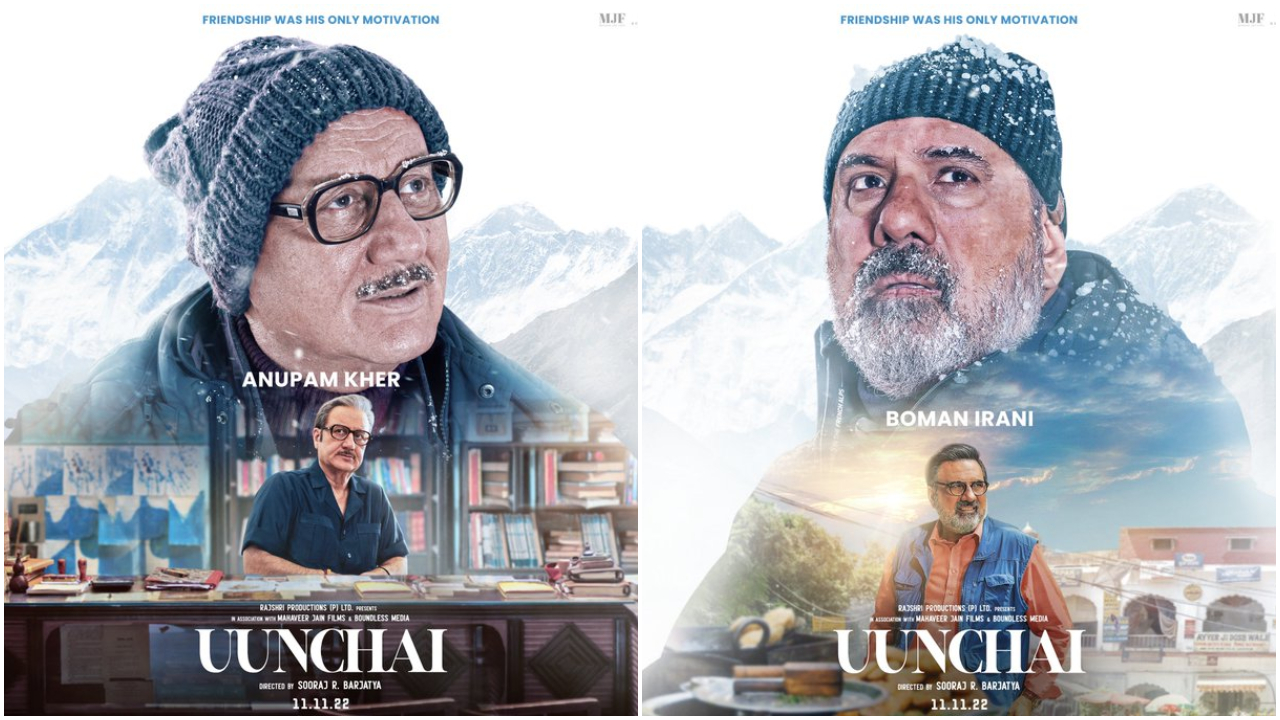 After roping in Dharmendra to unveil the character poster of Amitabh Bachchan from Sooraj Barjata’s directorial Uunchai, the makers dropped the first looks of Anupam Kher and Boman Irani from the film. The makers got Anil Kapoor to introduce Anupam’s character poster and Rajkumar Hirani to unveil Boman’s look from the film. Friendship has surfaced as the central theme of the film Uunchai and its campaign. With Dharmendra wishing his dear friend Amitabh Bachchan ahead of unveiling of his character poster, now Anil Kapoor has taken forward the baton, by sharing the exclusive character poster of his longtime friend, Anupam Kher in Uunchai. In the poster, the maverick Anupam Kher once again shows that he is the king of versatility!

The poster has been split in two halves showcasing Anupam Kher in two completely different worlds. On one side we see Anupam Kher in the humble surroundings of his book shop. On the other side, we see him in a totally different light amid snowcapped mountains, covered in multiple layers of warm clothing with eyes that have a sense of longing and achievement both.

Relive and celebrate the beauty of friendship with @Rajshri and @uunchaithemovie on 11.11.22. #Rajshri

Boman Irani’s poster today was unveiled on social media by his dear friend and ace director Rajkumar Hirani. Today, as Rajkumar Hirani revealed the look, one could see two avatars of Boman Irani from Uunchai. On one hand, he looked every bit of a common man with a market as his backdrop and food carts in the foreground. On the flip side, he looks up stunned and amazed at snow-capped mountains. With snow burned face and snowflakes all over him, Boman Irani looks nothing like his former self from the same poster. The intrigue deepens around the journey of Uunchai, what caused these friends to leave their cozy worlds and embark on a journey of a lifetime?

Feels good as I present to you my friend – Boman Irani as Javed Siddiqui in #SoorajBarjatya’s #Uunchai.
Can’t wait to see @bomanirani in this film.
Relive and celebrate the beauty of friendship with @rajshri and @uunchaithemovie on 11.11.22. #Rajshri pic.twitter.com/s0mFtbFGAW

Uunchai has marked itself as a film that is here to celebrate the selfless emotion of friendship. Staying true to the grain of the film’s story – friendship, Uunchai has managed to grab everyone’s attention with its noble theme and campaign. Uunchai is Rajshri’s milestone film that marks the production house’s 75 glorious years in the Hindi film industry. A film mounted on ambition and reinvention, Uunchai has a mega ensemble coming together for the first time! Boman Irani in this ensemble was casted by Anupam Kher. The Rajshri veteran took it upon his shoulders to get Boman Irani on the cast of Uunchai, completing the amazing trio of friends played by - Amitabh Bachchan, Anupam Kher and Boman Irani. The film also stars Sarika, Neena Gupta and Parineeti Chopra. The excitement to see character posters of ‘Ladies Of Uunchai’ soars high now!

Uunchai also promises solid performances by Danny Denzongpa and Nafisa Ali Sodhi. A celebration of life, age and friendship, Uunchai will be in a theatre near you on 11.11.22. The film is produced by Rajshri Productions in association with Mahaveer Jain Films and Boundless Media.