If true, this is big news indeed! PeepingMoon.com has come to understand that Farah Khan has taken her stalled musical Satte Pe Satta to Bollywood superstar Ajay Devgn. And, the actor might just be considering the film. This exciting development came about after Hrithik Roshan backed out of the film that Rohit Shetty is producing and Farah directing. Hrithik is believed to have had problems with the script. This after Anushka Sharma and he were almost locked in for the action-comedy and shooting was slated to begin in January.

Hrithik apparently came to know that the filmmakers had not got the rights to the 1982 Amitabh Bachchan-Hema Malini super hit that had been made by Romu Sippy and directed by Raj Sippy. Instead, they were considering a remake of the Hollywood film Seven Brides for Seven Brothers on which the Bollywood film was made. Hrithik lost interest and skipped the film, then. 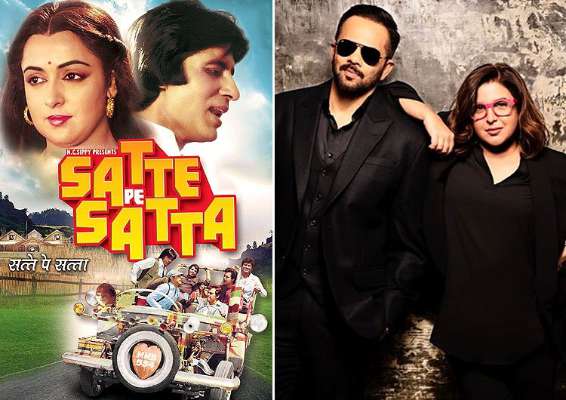 RECOMMENDED READ: Case registered against Raveena Tandon, Bharti Singh and Farah Khan for hurting religious sentiments of the Christians, the actress denies allegations by posting footage from the show

After that, Farah has been struggling to get a leading actor for the project. She is rumoured to have approached all the big stars who turned it down for one reason or the other. Among them were Salman Khan, Akshay Kumar, Ranveer Singh and others.

That’s when Rohit approached Ajay, a PeepingMoon.com source said. He is considering the film and might give his nod to Farah if his dates work out, the source added. In the meanwhile, there is another twist to the project. Anushka Sharma will no longer be associated with it. The makers are reported to have approached Katrina Kaif to star opposite Ajay in Satte Pe Satta but she has not said yes as yet. They are also said to be in talks with Kriti Sanon, Ananya Panday and several TV actresses to play supporting heroines opposite the other six male heroes who will play brothers to Ajay’s character of the elder brother, the source said.

Exclusive: 'You need to have a lot of guts to play the role of a trans