Advertisement
HomeBOLLYWOODEXCLUSIVEExclusive: ‘Wanted to break stereotype that the woman you want to bed can also be the one you eventually wed,’ say Maanvi, Kirti and Sayani about their characters in ‘Four More Shots Please 2’

Exclusive: ‘Wanted to break stereotype that the woman you want to bed can also be the one you eventually wed,’ say Maanvi, Kirti and Sayani about their characters in ‘Four More Shots Please 2’

Amazon Prime Video’s Four More Shots Please 2 is soon going to start streaming after a successful first season run. Starring Kirti Kulhari, Maanvi Gagroo, Sayani Gupta and Baani J in lead roles the series is directed by Nupur Asthana. In an exclusive interview with PeepingMoon.com, Kirti, Maanvi, Sayani and Nupur spoke about presenting so-called ‘flawed’ characters in the series that are relatable and believable and why we need to see such characters on celluloid, breaking the stereotype and forging a new path.

During the interview, the women of Four More Shots Please 2 were asked that critics termed the four protagonists as ‘flawed’ characters but why do we not term male characters as ‘flawed’ is the perfection solely a woman’s criteria. To this, Maanvi had a very interesting answer. She said, “Because we’ve not had a flawed male character. We’ve had an array of male characters like heroes, villains, a knight in shining armors and such. But for women we’ve have had very binary characters or limited morality. We’ve always treated our women as goddesses or vamps. So the idea was to break that stereotype. We wanted to break the stereotype that the woman is always chirpy and bubbly and she was the girl you want to take home and to bed. It was an unrealistic setting even for a man. So the idea was to break it and show them as humans. They are regular women, everyday women.” 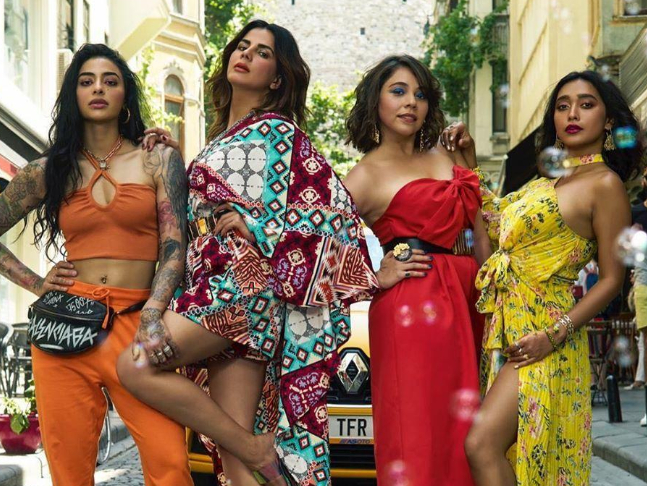 RECOMMENDED READ: Exclusive: ‘For these women sex is not a taboo and they choose to live life their own way,’ say Sayani, Maanvi and Kirti defending the paradigm shift shown in ‘Four More Shots Please 2’

Nupur agreed with Maanvi and said, “There was a period where women-centric films were depicted as doing something very very strong, like overcoming a rapist. She was a spy or a cop. not like you and me so a character like that was no interest to you or me.”

Kirti succinctly summarized and said, "We want to reach a place where we don't have to say 'flawed' Ever since Bollywood has come up with films the characters are always uni-dimensional or larger than life. So a show like ours has to be made because people don't want to see a man beating a bunch of twenty men or see a superhero but people want to watch people like themselves with flaws and reality and that are why we have to highlight that through our show.”