Advertisement
HomeBOLLYWOODEXCLUSIVEExclusive: ‘She is her own hero and her own villain,’ says Mandana Karimi on her character of Rehana in the web show ‘The Casino’

Exclusive: ‘She is her own hero and her own villain,’ says Mandana Karimi on her character of Rehana in the web show ‘The Casino’

Mandana Karimi is playing the lead opposite Karanvir Bohra and Sudhanshu Pandey in Zee5’s web show The Casino. The show has started streaming on the OTT platform today and had already piqued the audience’s interest.

The show vividly highlights the glamorous life of a casino but there is more to it than just plain gambling. Revenge, lies, lust and deceit are paramount and keep the three main characters trying to outdo each other in this taut drama. In an exclusive chat with PeepingMoon.com, Mandana opened up about her character that is termed ‘The Queen’ and her experience of working with Sudhanshu and Karanvir.

You play ‘The Queen’ in the show The Casino. Tell us a bit about your role?

I am playing a character called Rehana. The show is basically about the ups and downs of relationships where you are basically with someone with only what they can provide you or you genuinely love someone. The series shows how much greed can change your life and how much is enough. My character is a very strong woman, she knows exactly what she wants, and how she can get it and from whom she can get what she wants. She is her own hero and also her own villain. How was it sharing screen space with Karanvir Bohra and Sudhanshu Pandey?

I was very nervous being a part of this project as this was the first time I was playing the lead as there are a lot of expectations and responsibilities riding on your shoulders. With both Sudhanshu and Karanvir I was working for the first time. I met Karanvir for the first time on the look test, I knew who he was but had never met him before. However, there was some sort of comfort zone with him, how you be with a family member or a brother, we had that kind of love, respect for each other which also shows up on the screen. I had a lot of fun working with him.

With Sudhanshu, I didn’t know he was playing Marwah as another actor was supposed to play but later Sudhanshu came on board. The first scene that we had to do was an intimate scene between us. He actually made me so comfortable in the scene, he chatted with me and asked me how I wanted to do the scene. It was fun working with both of them. 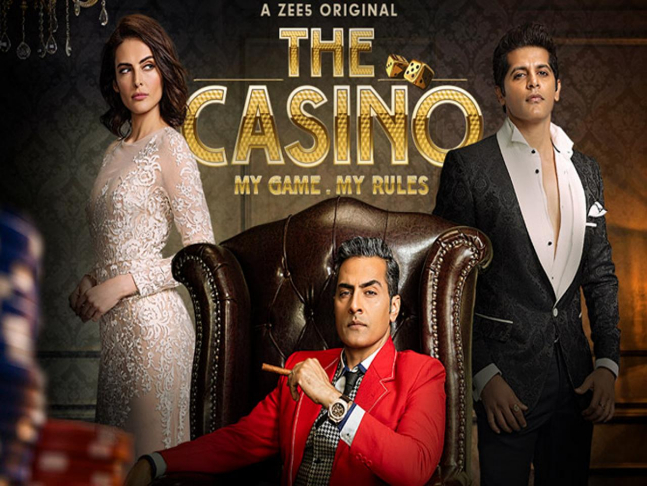 You’ve worked in a few films and taken part in reality shows as well. How different was it working on a web show?

I count myself as a lucky person who came to India as a model and things happened to me. I am not a trained actor but I love acting. It’s been a great journey for me as I have learned a lot in all the things I have done. After doing my film Bhaag Johnny, I went back to modeling. However, I was very clear that I want to be called an actor because even a small role can leave an impact on the audience and I don’t want to be relegated to item numbers but want to play different characters on screen. Not only because of Corona but I feel OTT has a lot of potential and in the future because it has a huge reach. Playing a character on a web show, you don’t’ fall of the series as you shoot episodes. Also, it is challenging because first people don’t know what you’re catering but later on after ten episodes they know you and playing that character up and down has also been a great experience for me.

Only 2 things are in Rehana's way: Mr. Marwah and his naive son, Vicky. And when Rehana has her heart set on something, she achieves it . Just 2 days to go for The Casino to open, only on @zee5premium Its My Casino, and my rules apply #zee5 #rehana

You’ve rocked the stage doing the pole dance in the show, what kind of prep did you go through to ace the pole dancing?

I am not a great dancer but if I have to shake a leg I will try my best. For the pole dancing, I wanted to take some time but Hardik Gajjar (director) kept saying that no, no it’s okay you’ll get it. The Mumbai schedule was very hectic as we were aware that the lockdown might happen any time so we had to finish the schedule as soon as possible. So they told me that if you’re okay then stay back on sets and don’t go home and I was like ‘ki kya karna hai?’ and then Hardik says ‘pole dancing’. So I used to shoot 15 hours, finish another two hours of practice on sets and then be on sets at seven in the morning the next day. With two days of practice, I learned the basic movements of pole dancing from our choreographer Salman. Salman warned me that on the day of the shoot I will be bruised and in pain but I was so excited that I kept practicing, but on the day of the shoot I had massive bruises and they had to cover it with layers of makeup. I was on medication but we had to finish shooting the entire song in one day. I was so exhausted and so high on medicine that I didn’t know what was happening, I just kept following my director. They had to call a doctor for me who gave me vitamin shots so that we could finish the shoot.

What else is in the pipeline?

I was supposed to shoot for one of the Zee5 projects that was supposed to start in Thailand but probably that will start in India now because of the lockdown. The second thing is there is another project which is a collaboration of Zee5, Endemol and ALTBalaji that I am looking forward to. I have shot a movie last year with Sunny Leone that is a horror-comedy which is a completely different genre. We still have to shoot one song which I am hoping that it’s gonna happen soon and will release soon.

PeepingMoon Exclusive: Mithun Chakraborty and Shruti Haasan to make we

PeepingMoon Exclusive: First 2 days I searched for lipstick, then real