Advertisement
HomeBOLLYWOODEXCLUSIVEExclusive: I'm glad being called the 'Poster Boy of Netflix', would love to be omnipresent like Radhika Apte: Vikrant Massey

Vikrant Massey is a man of multiple talents. Be it acting or dancing, he knows nothing but perfection. Starting off his career with a television serial titled Kahaan Hoon Main in 2004, Vikrant's graph escalated after Balika Vadhu in which he played the role of Shyam Madan Singh, a supporting character. Switching over the films with Lootera in 2013, Vikrant has now covered the web platform, that too in quick succession. The year, although has been unkind to many, has proven fruitful for the handsome actor. His three films- Dolly Kitty Aur Woh Chamakte Sitare, Cargo and Ginny Weds Sunny, premiered on Netflix within a month's time.

In no time, Vikrant is all over the OTT and fans have rightly hailed him the 'Poster Boy of Netflix'. Interestingly, with back-to-back releases on the digital giant, we asked him he is rechristened as the new Radhika Apte of the web? Spilling the tea about his newly attained titles, Vikrant told PeepingMoon in an exclusive interview that he takes it as a compliment and, would love to be 'omnipresent' like Radhika. "All of it is a coincidence and I am not complaining at all. I’m really happy to be associated with Netflix. It's kind of you all to call me the 'Poster Boy of Netflix.' All three films have simultaneously released this year and have been well-received. I take it as a compliment. As for Radhika, she is incredible, such a fantastic actor. She is omnipresent and as an actor, I would love to be omnipresent," Vikrant shared laughingly. 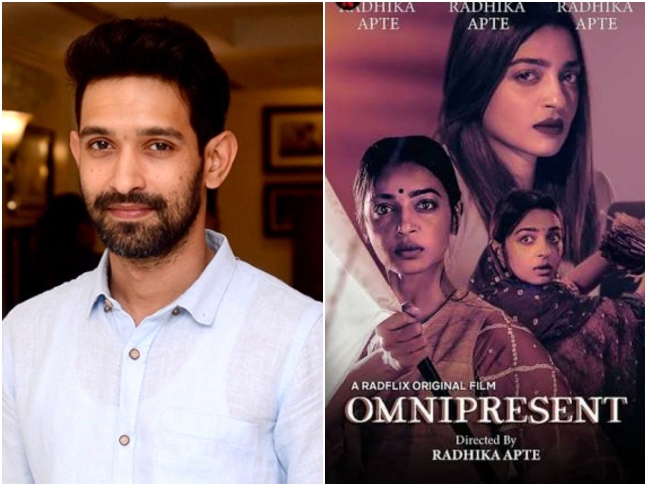 Recommended Read: Biggest of film stars are doing TV for last 15 years, why don't we categorise them as TV actors: Vikrant Massey

Vikrant and Radhika, earlier this year, teamed up for an initiative titled Aage Ki Soch to motivate people to be productive during the lockdown.

Interestingly, Vikrant's Ginny Weds Sunny co-star Yami Gautam believes that he is the 'damad (son-in-law) of Netflix' -  who is practically seen all over the digital giant platform this year!