He does most of his action himself. And according to the stuntmen and fighters of the film industry, the Bollywood superstar is their No. 1 Hero. They are all big fans of his. But Akshay Kumar has a special place in the hearts of all these Bollywood extras who daringly risk their lives to make the lead actor look good on screen. It’s because for years he has been paying for group personal accident insurance and mediclaim policies of 550 members of the Movie Stunt Artistes Association. Yesterday they thanked him for renewing these ICICI Lombard General Insurance Company Limited policies for another consecutive year.

Akshay has been quietly doing big acts of charity and performing unparalleled deeds of kindness that have made him the ‘People’s Champion’ of the industry.

Aejaz Gulab, general secretary of the association that looks after all artistes, duplicates and fighters doing stunt and action work in films, was working with Akshay on Once Upon A Time In Mumbai in 2010. They talked about the work Aejaz did and the dangerous life he led. “Akshay Sir asked me if we were covered by insurance. I said we were not. We had tried. But the insurance companies turned us down because we were high risk individuals. Or to discourage us they quoted high premiums that we could not manage.” 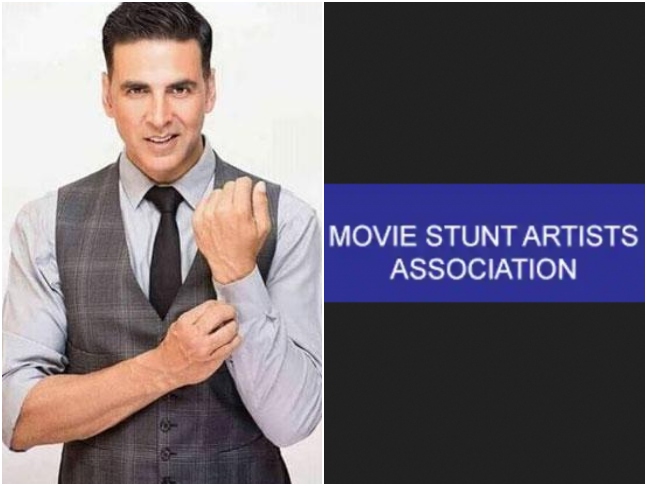 Akshay reportedly assured Aejaz that he would look into this. The actor was as good as his word. He organised group accident and mediclaim insurance policies for an incredible 550 members of the Movie Stunt Artistes Association and has been paying their premiums since then. “I don’t know how he did it, what strings he pulled, how much goodwill he exercised, but all our members working in Bollywood are covered by insurance now,” Aejaz said. “For us, Akshay Sir is Superman! He has got a big heart, nothing is impossible for him.”

Fight master Abbas Ali Moghul said action comes easy for Akshay. His techniques are perfect. He takes every precaution. Not just for himself but everybody on the set. He goes into the minutest detail. “In Khiladi 420 (2000) we shot a scene where Akshay Sir’s character had to stand on a plane 1,000 feet mid-air. I was following in a chopper. He did it himself. For such death-defying stunts the duplicate artistes are paid Rs. 50,000-75,000 extra by the producer. Akshay Sir, after doing these stunts, collects that money and hands it over to the duplicate who ought to have been taking his place.”