Advertisement
HomeBOLLYWOODEXCLUSIVEPeepingMoon Exclusive: Audiobook 'The Last Girl To Fall In Love' tells the problem isn't with gender but power and its misuse: Rasika Dugal & Prateik Babbar

PeepingMoon Exclusive: Audiobook 'The Last Girl To Fall In Love' tells the problem isn't with gender but power and its misuse: Rasika Dugal & Prateik Babbar

Popular author Durjoy Dutta recently released his latest audiobook, titled The Last Girl To Fall In Love. It is available on Audible currently and revolves around 3 characters- Manav, Sarita, and Sandhya. Prateik Babbar is the voice for Manav's character while Rasika Dugal is Sandhya's voice. While avid users of audiobooks are enjoying The Last Girl To Fall In Love, PeepingMoon.com got in touch with Rasika and Prateik for an interesting conversation.

Talking to us, Rasika and Prateik opened up about what makes The Last Girl To Fall In Love a relevant story. They also agreed that audiobooks are another way to connect with the audience who are confined to their homes due to COVID-19 lockdown. 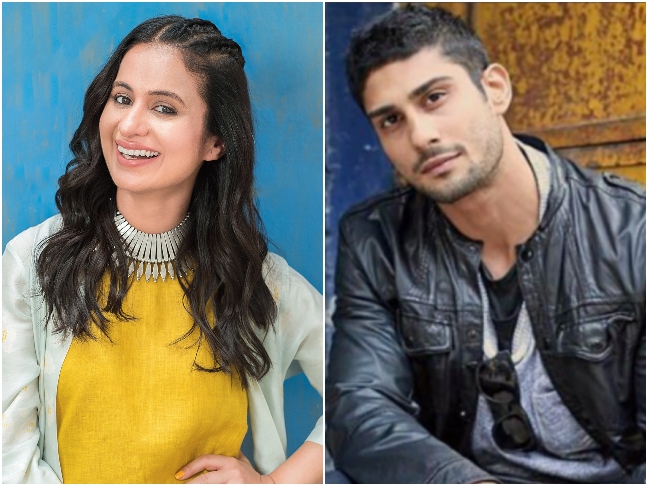 Do audiobooks bring the actor and audience closer?

Prateik: Deviating slightly from the question, I would like to say that the story is about the new world order. Womankind is the ruling species. Everything is ruled by women, they rule the world, didn’t they always rule it? In this story, it is on your face. In our society, people call it a curse when a girl child is born, but in our story, the birth of a baby boy is a curse. Coming back to your question, I think it is going to work both ways. We have a better opportunity to connect with our audience and vice versa. We can connect with the audience by showing a different side of our craft and they will have an opportunity to accept that side.

Rasika: It is definitely an interesting medium. Before printed words became popular, everything was verbal. Oral storytelling was something we all knew. In fact, it is the way we listened to stories while growing up. I’m sure the stories you remember vividly were told by your grandmother or mother. Audiobooks are the closest substitute to that. I always feel stories are meant to be told rather than meant to be read. The oral form of storytelling still exists. It has always been fascinating to me. In today's busy city lives that we lead, audiobooks are the closest we can get to oral storytelling. We inherently know the form and audiobooks are just reminding us of that.

Prateik: Oral storytelling is a huge part of our heritage. Even worldwide. Everybody has listened to stories as children. It is an integral part of our childhood. As Rasika said, it is a very intimate experience. Personally, if you ask me, reading a book is more time consuming than listening. For me, listening is more fun. I like reading too but mera bohot slow process hoga.

Rasika: Last year in the lockdown, I was listening to a podcast regularly and got hooked to it. I felt the person hosting the podcast is my friend even though we had not met. But later, when I connected with him virtually, I told him about the experience and how I thought I knew him more than I actually did.

Do you both feel author-backed roles are easier to pull off?

Rasika: There is a lot of pressure when it comes to author-backed roles but at the same time, you get support from the script too. Yes, the pressure is more because in one sense, the success of the project, by that I mean its reach, depends a lot on you. You feel responsible, but you also have a lot of help. In other roles, maybe smaller parts, you might not feel the responsibility but leave a greater impact. In such cases, you don’t get that much help the way author-backed roles get.

Prateik: I agree with Rasika, she summed it up beautifully.

You both have worked on the web. Is the digital boom adding a new dimension to your careers?

Prateik: It is the new name of the game. The new hot medium is web shows. It absolutely adds another dimension to an actor’s career. Shooting for a web show and film is almost the same but with the former, you get the time to shoot more content. You also have better reach. The audience can see more of you.

Rasika: As Prateik said, the OTT gave me the opportunity to reach out to the audience. I didn't have the access to them because of the films I did before streaming platforms became popular. I had done many independent films and I totally enjoyed the work that I did there but it didn’t give me the opportunity to reach the kind of audience like how Mirzapur or Delhi Crime did. It was new to me and it was introduced to me through my work in the streaming space. It has been fun and not something that I had consciously asked for in my life as a performer. It wasn’t something I sought at that time. I was happy with the work I was doing and it was keeping me creatively satisfied. This is a space that has access to a wider audience and has many opportunities to keep me creatively satisfied. It was a game-changer for me. I have been having a ball as a performer with different stories, characters etc. on the streaming platform.

Prateik, Chhichhore won a national award. With this, do you sense any additional responsibility on your shoulder?

No pressure, but I feel extremely thrilled to be a part of that film. It will always be a special one to everyone as it was Sushant's last film. It gives a sense of pride to be a part of a National Award-winning film. There isn’t any pressure since I wasn’t the lead actor, but all of us celebrated that film as if it was our own. Fingers crossed, I hope to get more opportunities to be involved in National award-winning projects and win some for my own performance.

Why do you think The Last Girl To Fall In Love is a relevant tale?

Prateik: It is relevant because it is a dystopian love story and thriller. It is a post-apocalypse situation and hopefully, we’ll not have an apocalypse in our lives this time. I hope it doesn’t happen because of COVID-19 aur abhi fungus bhi aa gaya hai. I can totally imagine it and thoughts have crossed my mind a million times since last year that zombies aa jayenge, puri duniya band ho jayegi aur zombies nikal aayenge. Also, we speak about the virus in the story. It is pretty similar if compared to lifestyle changes.

Rasika: The story is relevant for many reasons. I was a part of the prequel titled The Last Boy To Fall In Love and I was narrated the story around 2.5 years ago. The story primarily talks about the Kali virus that causes destruction in the world. Whatever we have been through in the last 1.5 years has reminded me of that narration. There are some stories that you read and hope it would never be reality. We called it dystopian back then but if you read the book now, you'll call it a reality. We are living in a kind of dystopia now.  The Last Girl To Fall In Love reimagines the world order. It effectively tells you that the problem is not with the gender but the power and its misuse. The problem is discrimination and how people who have been oppressed behave and who then want to be the oppressor. That's what the story tells you. The story will always be relevant and that is the mark of a good story.