Peepingmoon.com exclusively revealed last month that Sonakshi Sinha and Riteish Deshmukh are the newest to join the bandwagon of actors who are exploring horror-comedy, a genre that has lately been gaining momentum among Hindi audiences. We informed the readers that they are collaborating for the first time for Ronnie Screwvala's next yet-untitled production that's said to be similar in theme yet distinctly different from other horror comedies coming out of India. Now, we have got the further details of the project that will get off the ground soon in Mandawa, Rajasthan.

We have learnt that Saqib Saleem, known for films like Dad Ki Maruti and Race 3 has joined the cast of this RSVP Productions venture. The actor will be seen romancing Sonakshi who is said to be playing the role of a ghost hunter. The film has interestingly been titled Kakuda and will be directed by Marathi filmmaker Aditya Sarpotdar who has earlier helmed Marathi films like Classmates and Mauli (starring Riteish Deshmukh). This horror-comedy will be Aditya's fourth Hindi directorial after Thodi Thodi Si Manmaaniyan (2017), The Sholay Girl, and the last year's hit Voot Select series, The Raikar Case. 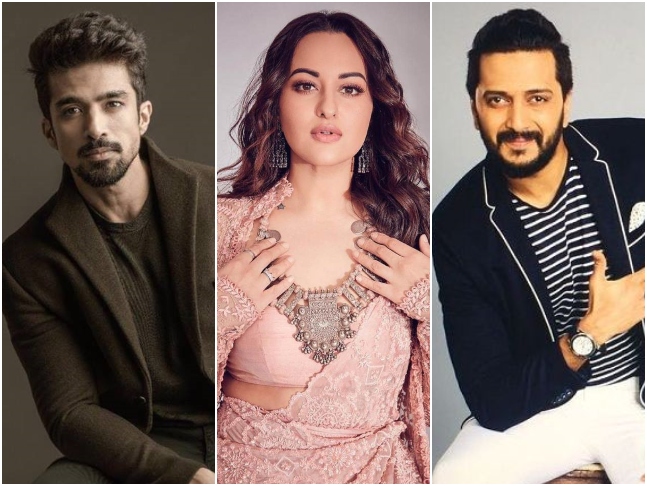 The sources have also informed us that the film's shooting plan has been advanced by about a month-and-a-half. Earlier scheduled to go on floors in September, the project will now hit the floors around the 16th of this month itself. The makers have chalked out a 40-days start-to-finish schedule in Rajasthan to shoot this medium-budget, real incident-inspired fictional drama. The pre-production is going on in full swing as we report this development to you.

Meanwhile, Sonakshi Sinha's war drama Bhuj: The Pride of India co-starring Ajay Devgn and Sanjay Dutt is scheduled to premiere on August 13 on Disney+Hotstar. Her web series debut, the Amazon Prime series Fallen by Reema Kagti is currently in post-production and will premiere sometime later this year. The actress will shoot for Shree Narayan Singh's Netflix film, Bulbul Tarang only after completing Kakuda. Riteish Deshmukh, on the other hand, is on the verge of finishing his Netflix film with Shashanka Ghosh before diving his attention to this horror-comedy.