PeepingMoon Exclusive: BellBottom not banned in UAE, showing in 18 theatres

Contrary to media reports in some Bollywood sites in India, Akshay Kumar’s Thursday release BellBottom is not banned in the United Arab Emirates. The hijack drama based on true events in 1984, co starring Vaani Kapoor, Lara Dutta and Huma Qureshi, is showing in over 18 theatres from Dubai to Abu Dhabi, Sharjah to Ajman, and Fujairah to Ras Al Khaimah. Advance booking for the Akshay Kumar thriller had opened in the UAE circuit along with other international markets like USA, Canada, Australia, New Zealand and Fiji.

One man, one mission, beyond the nation. Taking #UAE for a spy thriller with #BellBottom. Book your tickets now -https://t.co/StlC8yV5fchttps://t.co/k4qdp3FoI4https://t.co/YFFFskSVNp@akshaykumar @Vaaniofficial #BellbottomInCinemasNow pic.twitter.com/FwBfJHJSuA

RECOMMENDED READ: The Mark Manuel Interview: ‘I had no money for bellbottoms in the 1980s,’ says Akshay Kumar on BellBottom's release 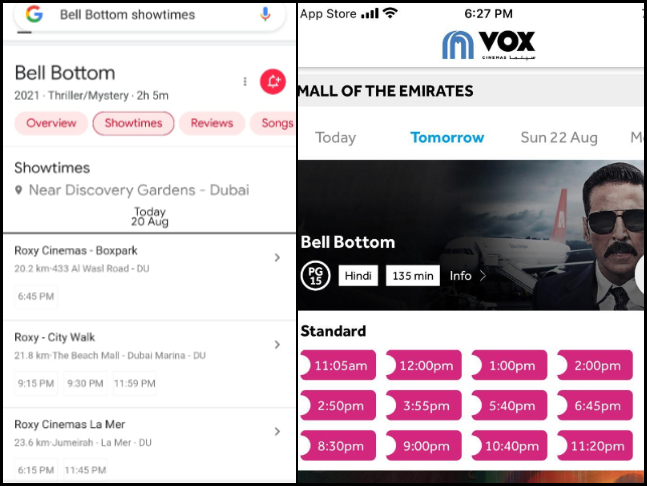 Worldwide, this is the first big Bollywood release coming to theatres after India entered the lockdown phase in March 2020. A Dubai-based Communications professional said BellBottom had excited the Bollywood aficionado and Akshay fan and also the theatre owners in the UAE. In the Emirates, the film was released through VOX Cinemas in Hindi with English and Arabic subtitles. Shows opened as early as 11 am and continued till 12 am. Some 18-plus theatres are showing BellBottom. VOX Cinemas tweeted, “Inspired by true events. @AkshayKumar stars in the Bollywood spy thriller, #BellBottom... Experience it ONLY on the big screen... Book your advance tickets now at https://voxcinemas.info/3jCFAMj.”