With determination, discipline, and dedication, Akshay Kumar has proved in a career spanning 30 years that he is truly the bonafide superstar of the Hindi Film industry. The actor enjoys a massive fan following, not only for excelling in his diverse choice of projects but also for championing the healthy living that he espouses. The man, over the years, has not only championed social causes in a slew of films but also managed to stand up for women issues and provide martial arts self-defence camp to women.
On his 53rd birthday, decoding how Akshay became Bollywood's 'perfect all-rounder' - 'One man, many hats,' as they say! Akshay’s film career can be a study on how perseverance, determination, and hard work culminate into success. With over 30 years of entertaining the audience with his antics, Akshay has become the industry’s most successful and bankable stars. Akshay made his debut in 1987 with Mahesh Bhatt’s Aaj, where he had a minor role and followed it up as lead actor in Saugandh in 1991. His breakthrough role came with Abbas-Mustan directorial Khiladi, which also earned him his moniker Khiladi Kumar over the years with. Akshay’s initial Bollywood career saw a series of fourteen flops in a row, so much so that he had almost given up on acting. However, the actor did not let failure faze him and he bounced back with Main Khiladi Tu Anari and Mohra which were the highest-grossing films of 1994.

Akshay brought in a new energy and adrenaline rush with his martial arts skills and daredevil act in his action films. His films under the Khiladi series with Khiladiyon Ka Khiladi cemented his place as India’s favourite action hero. His fearsome wrestling with WWE star Undertaker in the film packed the aisles in theatres. However, actin was not the only genre Akshay excelled at. He soon broke the mould with one of the most iconic comedy films of recent times when he teamed up with Paresh Rawal and Suniel Shetty in Priyadarshan’s Hera Pheri. Akshay’s streetsmart act was a class act and is still revered today. Of all his contemporaries, Akshay was probably the first one who managed to break the stereotype he was slotted into and managed to ace every role and every genre. In fact, Salman Khan even went on record in a TV show to say that Akshay has managed to really evolve as an actor compared to all the other top-notch superstars. Akshay’s career took another dramatic turn when he started lending his weight to societal issues. He managed to break his persona of doing slapstick comedy tinged with a little sexist humour by taking up issues in films like Toilet: Ek Prem Katha (2017) and PadMan (2018). It was momentous to see one of India’s biggest superstar advocating menstrual hygiene and even showing to wear a sanitary napkin in the film PadMan and for that Akshay deserves a standing ovation.

In 2019, Akshay appeared in four films - Kesari, Mission Mangal, Housefull 4 and Good Newwz - all superhits at the ticket window. His future lineup boasts of films like Sooryavanshi, Atrangi Re, Prithviraj, Bell Bottom, Bachchan Pandey and Rakshabandhan that are sure to be box office winners as well. 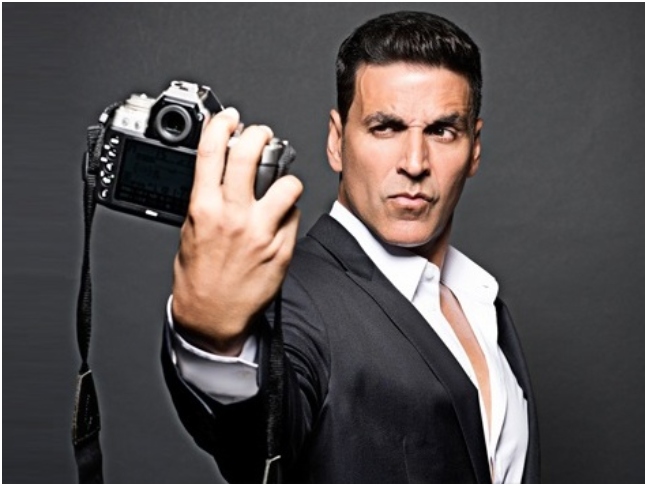 Akshay took to production a bit later as compared to his contemporaries. Akshay stepped into the production business in the late 2000s. His first production house Hari Om Productions was established in 2008. The founders are Akshay, his mother Aruna Bhatia and wife Twinkle Khanna. 'Hari Om' happens to be the name of Akshay's father. Later in 2009, Akshay launched another production company called Cape of Good Films that currently has several big films on its platter. In 2011, the actor launched his third and final production company called Grazing Goat Pictures in partnership with Ashvini Yardi. Akshay has not only churned out great content through his production companies but also lent his name to a Marathi film Chumbak in 2017. The actor believes in always 'standing by good content'. 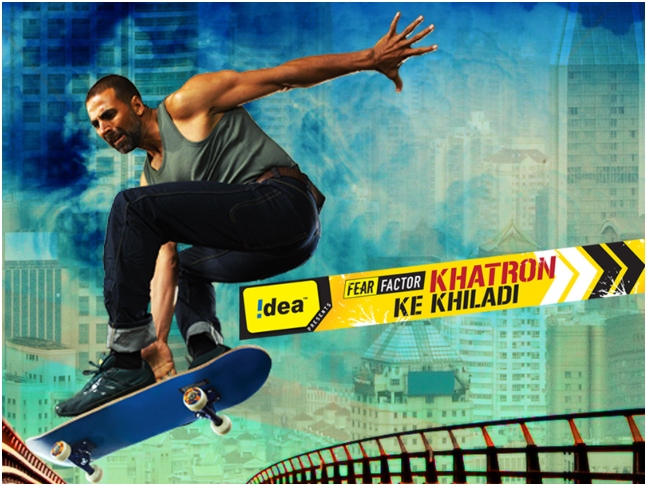 The actor did not stop with films and production only. He also made his name in the television industry, becoming the OG Fear Factor king. Akshay started his journey as a reality TV show host in 2004 with Seven Deadly Arts with Akshay Kumar. Later, he went on to host three seasons of the hit reality show Fear Factor: Khatron Ke Khiladi (2008-2011). His daredevil and action star status accorded him a natural progression in hosting Fear Factor and the season remains one of the most highly viewed of the franchise. Akshay also brought Masterchef to India and hosted the first season in 2010. In 2014, he hosted the dance reality show Dare 2 Dance, after which he made an exit from the hosting role. Akshay was always referred to as the most 'entertaining' host. His unique style and andaaz to present shows was impressive and kept fans hooked. 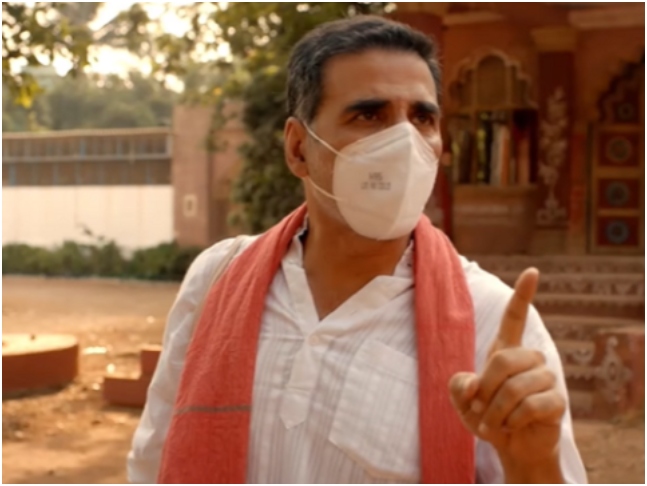 In Forbes magazine’s words, "Most of his (Akshay) money comes from endorsement deals; he shills for everything from multivitamins to toilet cleaners.” As per Duff & Phelps’ Celebrity Brand Valuation Study 2019: New is Gold, Kumar is India’s most powerful celebrity brands - worth US$ 104.5 million (or an estimated Rs 742 crore). He was the first actor, breaking the jinx that the pandemic had cast on the film industry, by shooting six TVCs in nine days at Mehboob Studios in July 2020. Akshay’s charisma and his common-man avatar is a big draw for companies who see him as someone who espouses healthy and clean living. Besides advertising for brands, he also manages to lend his voice to societal and public-health notices for the government. 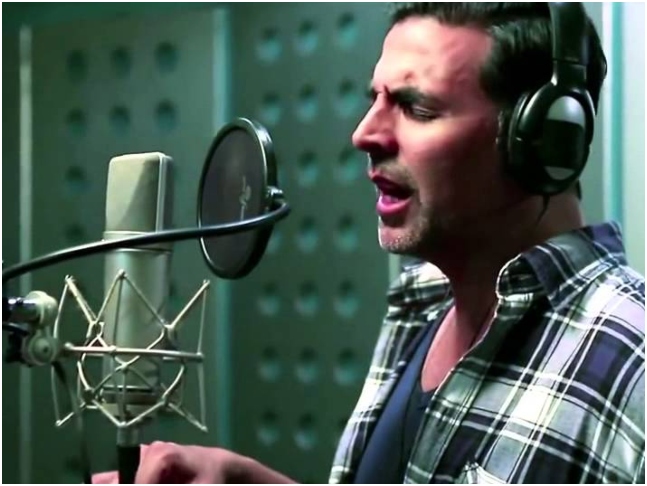 Trust Akshay to effortlessly slip into any role. After a remarkable acting career, the actor made his singing debut in 2013 with a romantic ballad for his film, Special 26. While earlier Akshay lent his voice for a few lines in songs and rapped with Snoop Dogg in the title track of Singh is King, this was for the first time that he sung the entire romantic number titled Mujh Mein Tu. When Akshay decided to sing, he left no stone unturned and trained regularly for almost five months for his first stint as a singer. The song was a massive hit and is one of the best songs sung by an actor. Akshay Kumar is not the one to shy away from pushing the envelope when it comes to his action sequences. From thrilling car chase scenes to high-octane fight sequences, we’ve seen Akshay do it all with much ease. While many stars resort to using a body double for such sequences, Akshay goes the extra mile and performs the dangerous stunts on his own. The actor is not called Khiladi Kumar for nothing. The actor does not hesitate to perform daredevil stunts in his films. Trained in martial arts, Akshay has often refused the help of a body double, choosing to perform many dangerous stunts himself and this has earned him the tag of ‘India’s Jackie Chan’. 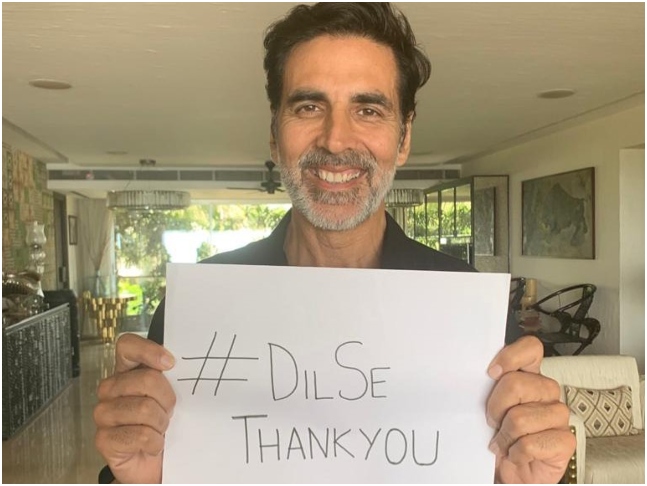 Akshay is undoubtedly one of the few actors who has always stepped up to help people whenever he could. Be it through his movies or his generous acts like donating for the victims of natural disasters and national emergencies, Akshay has on multiple occasions showed how much he loves his country. In difficult times, while the state and the central government do whatever they can in their capacity, Akshay makes it a point to stand in solidarity to help them be on their feet again. Be it the PM Cares Fund for COVID-19, Flood Relief Funds, or Home for Transgenders and Acid Attack Survivors, Akshay has always come forward to help the ones in need. He is well known for his philanthropy. He was one of the first actors to donate for the PM Cares Fund during the Coronavirus pandemic. 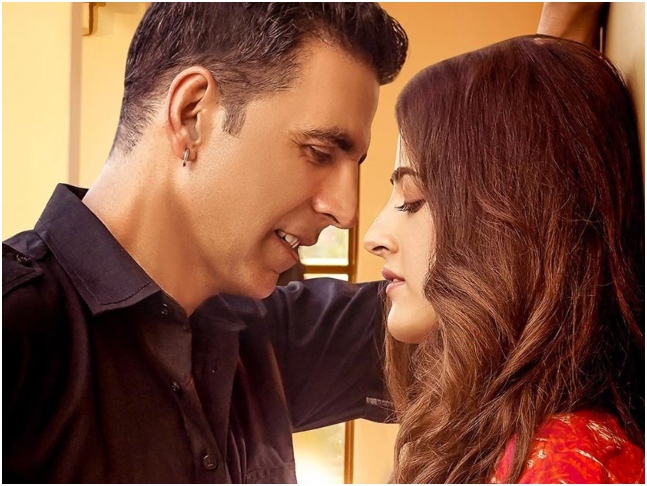 After impressing the audience with his entertaining and informative films, Akshay ventured into the world of music in 2019 with his first-ever music video Filhaal. With Nupur Sanon as his heroine, Akshay presented a romantic and emotional tale of love through the song. "This melody touched me in unbelievable ways," Akshay said at the time of the song's release. It went on to become a superhit and break records with over 870 million views on YouTube. After the success, the makers announced part 2 of the song that was to be released in 2020 but due to the COVID-19 pandemic, got postponed. 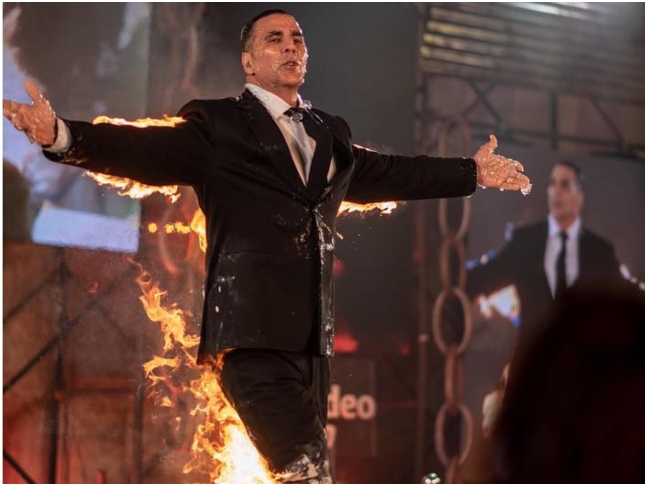 In 2019, Akshay announced his web debut with a grand event. The actor will enter the digital space with an edge-of-the-seat thriller series, whose working title is The End. Amazon Prime Video announced the series with Abundantia Entertainment. Akshay, for The End's announcement event held in March 2019, stunned people by setting himself on fire on stage. Performing daredevilry stunts, the actor increased the excitement for the series amongst fans. The multi-season show is presently under development and aims to appeal to fans of the action-thriller genre worldwide. Being envisioned at an unprecedented scale and cinematic experience, the show promises to bring in the next level of the action genre. It is said to go on floors in the second half of 2021. Looks like, Khiladi Kumar is all set to conquer the webspace as well! 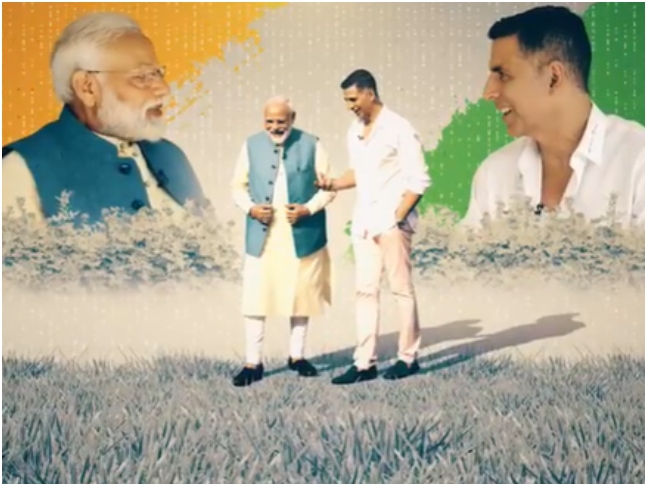 In April 2019, Akshay became the first Indian actor to host a candid interview with Prime Minister Narendra Modi at 7 Lok Kalyan Marg, the PM's residence. In the interview, PM Modi spoke a lot about his life and experiences. The interview was about everything but politics and election. Akshay created a huge buzz online for his stint as an interviewer. He made the interview informative, fun and entertaining. He had said ‘anyone would have jumped’ at the chance to interview PM Modi, reiterating that he approached the conversation as a common man. Akshay is not the typical Bollywood hero but an exemplary citizen of the country with a heart of gold. His fight for humanitarian concerns has not only enlightened fans but also made him a bona fide favourite as well. In 2017, Akshay launched the Bharat Ke Veer app, with the help of the home ministry. The platform lets people send money directly to the bank accounts of family members of soldiers martyred in the line of duty. Time and again, Akshay has promoted the app and urged everyone to make donations, as little as possible. Akshay, whose father was an officer of the Indian Army, has earlier donated money to numerous families of martyred soldiers. With the app, Akshay hopes for a better future for the martyred soldiers' families. "This is our duty, this is our responsibility," Akshay feels.

Happy Birthday, Akshay Kumar. There's truly no one like him!