Hindi films are a mixed bag whenever it comes to portraying diversity and marginalized characters. More often than not, Bollywood tends to stick to a set pattern when it comes to portraying homosexuals, transgenders, eunuchs or hijras. However, hijras often get the raw deal in films. Usually they are always caricatured and come for a brief period of time on screen when the scene depicts a child’s birth or maybe a marriage ceremony. But when they do get a full-fledged starring role in films their characters usually have negative qualities and made fun of, there is hardly any redeeming quality that the filmmakers seem to bestow on them. They are made to dance and clap a certain way, their costumes are outlandish, accent exaggerated and are treated with little or no respect on celluloid.

Akshay Kumar’s upcoming film Laxmii is probably the first Hindi film where the main lead plays a transgender character and has not made a mockery of them. Although the film is yet to release, Akshay’s portrayal in the trailer has already created a positive buzz amongst the audience. The actor along with his leading lady Kiara Advani came forward to urge their fans and followers to give the third gender respect with ‘Laal Bindi’ campaign. But before, we see superstar Akshay’s changing the narrative for hijras on the screen in a red sari, a bun and a red bindi, in a central role - here are a few films where hijras or eunuchs played a pivotal role in the narrative, yet in the most stereotyped fashion: 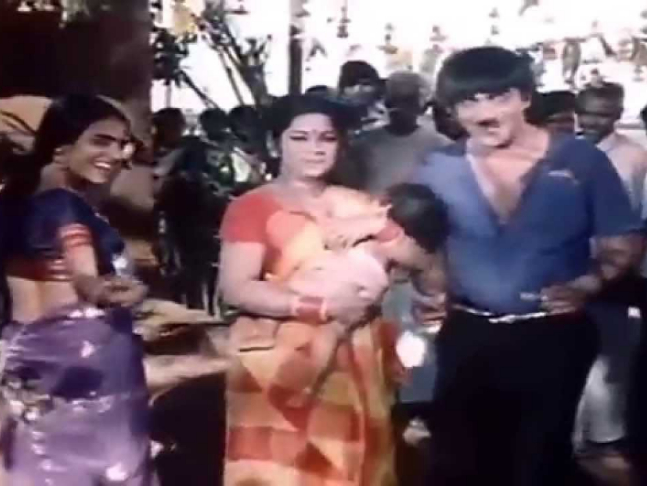 Mehmood’s drama-comedy had probably the first song picturized on eunuchs, highlighting the way hijras clap and dance, and give blessings to a newborn. The song Saj Rahi Gali Mori Amma Sunhari Gote Mein is still popular today and was sung by Muhammad Rafi and topped the Binaca Geet Mala, which was the only countdown show at the time. 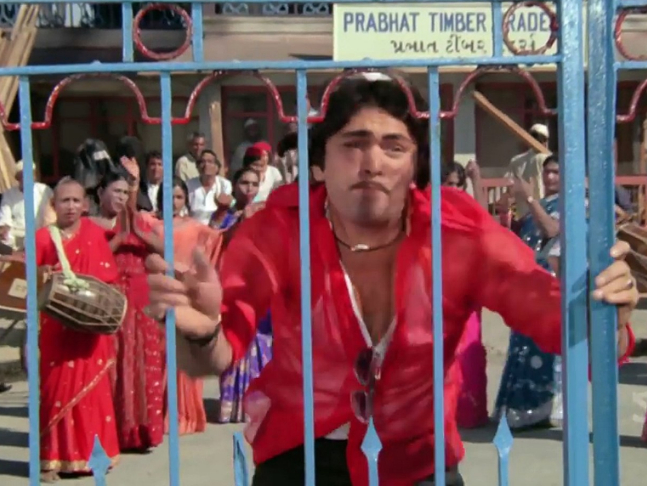 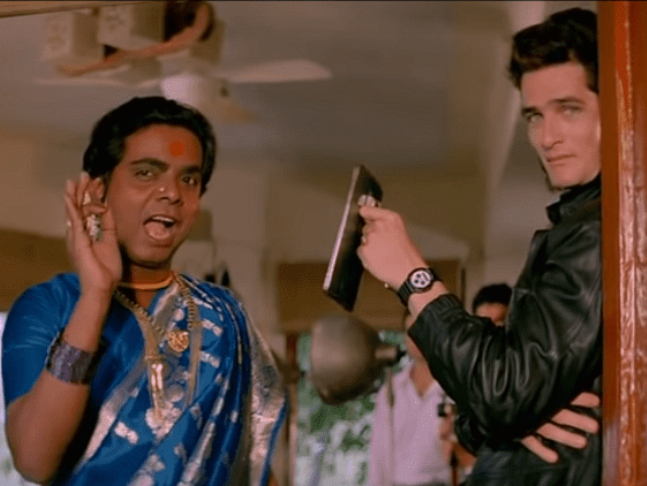 Probably the most impactful character of a transgender was played by Sadashiv Amrapurkar in Sadak. However, the film showed the character as the main antagonist. The film was a runaway hit and starred Sanjay Dutt and Pooja Bhatt in the lead. Playing the role of Maharani, a brothel owner, Amrapurkar was vile, cunning and ruthless, dressed in bright feminine clothes, scarlet mouth and a bindi. His hate-worthy performance made the Filmfare Awards kickstart the category for Best Performance in a Negative Role. 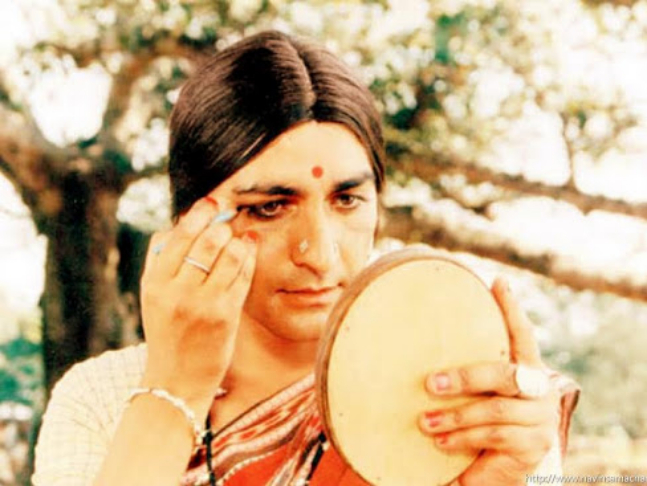 Directed by Amol Palekar, Daayra starred Nirmal Pandey in a pathbreaking role of a transvestite. Nirmal bagged a Best Actor Valenti award in France. The film told the story of a transvestite dancer and a gang raped woman who begins to dress like a man. 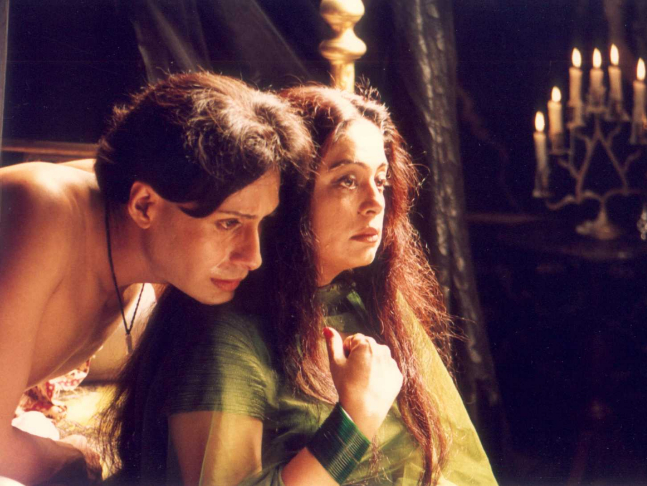 Arif Zakaria plays a eunuch in the film. He plays the role of an accomplished actress’s son in the film whose mother must come to terms with the fact that her son is a eunuch. For Arif’s impeccable performance he was nominated for a National Film Award. 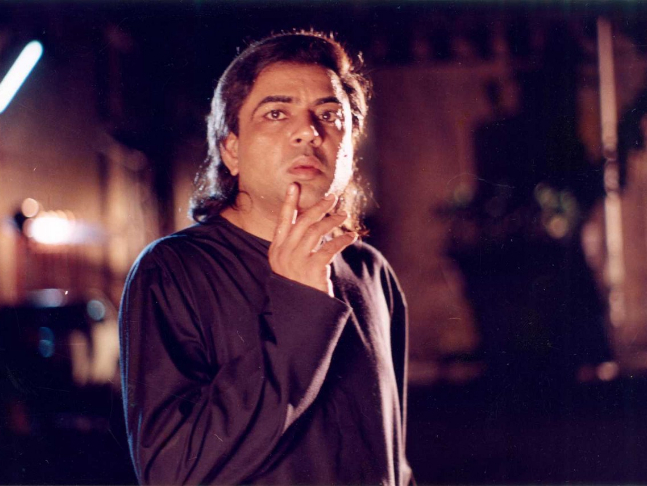 Mahesh Bhatt redeemed himself when he cast Paresh Rawal as a transgender in Tamanna and portrayed the character in a positive light. Rawal plays the role of transgender hair stylist but brings in the stereotypical body language of the third gender in the role. His character of Tikku adopts and fathers an abandoned girl child played by Pooja Bhatt. 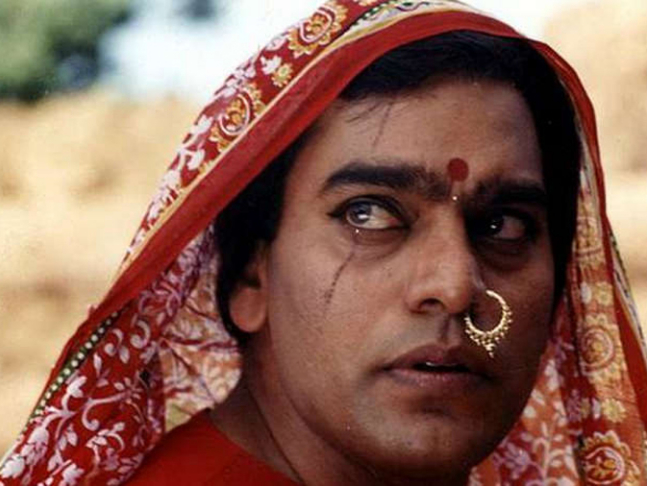 Akshay Kumar and Preity Zinta starred in this psychological action horror film directed by Tanuja Chandra. However, it was Ashutosh Rana’s turn as a religious fanatic that was the highlight of the film. Ashutosh did not play a transgender or a eunuch in the film but in one of the most poignant scenes he is shown dressed in a sari as he tries to kidnap and kill a child for his sacrificial rites. 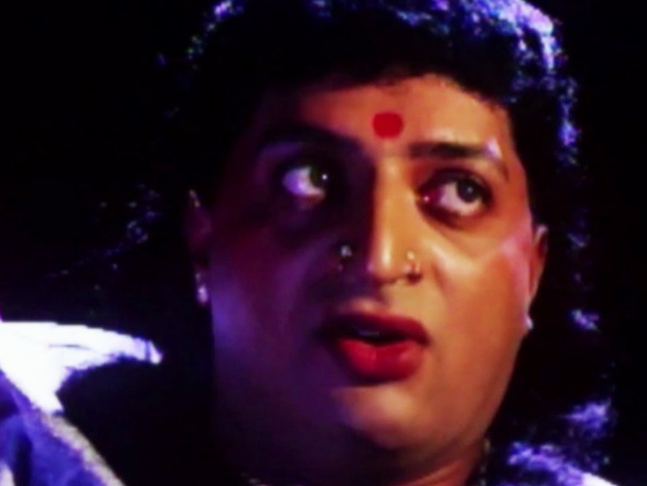 Tamil film Appu was the remake of Sadak and had Prakash Raj play the role of Maharani, a eunuch or transgender and a brothel owner. Maharani plays the main antagonist in the film and hence is a negative character. 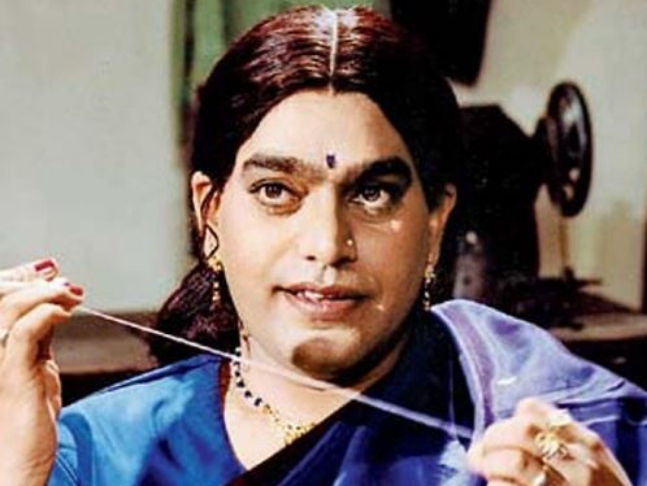 Ashutosh Rana once again donned the sari for the film Shabnam Mousi but this time around he played a positive character. Inspired by real life Shabnam Mausi who became the first transgender Indian to be elected as MLA; Ashutosh did justice to the hijra community with his performance. 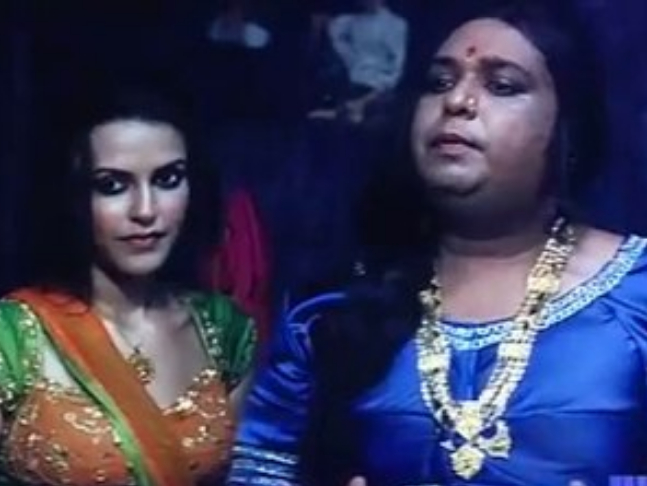 Snehal Dabi plays a transgender/eunuch in the film who is a pimp and provides call girls to his clients. Although Snehal did a commendable job in the film, it just goes to show that transgenders are devoid of respectable work in society. The film starring Abhay Deol and Neha Dhupia in the lead has become a cult film due to its unpredictable storyline and myriad twists-and-turns. 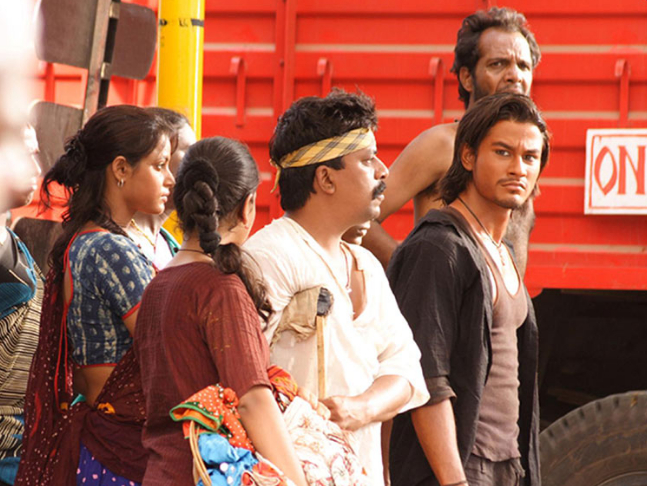 Madhur Bhandarkar’s films portrayed and referenced eunuchs intermittently but the films did not portray them with depth or substance. The films adhered to the societal prejudice against the third gender. 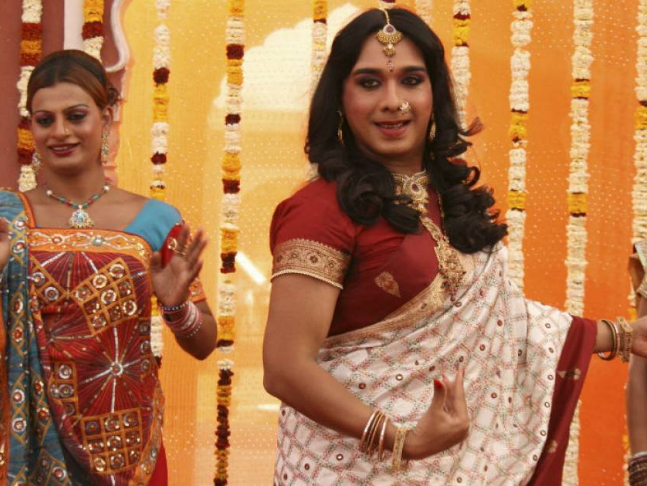 Queens! Destiny of Dance is directed by David Atkins and stars Seema Biswas as Guru Amma with real-life transgender Laxmi Narayan Tripathi, Raj Zutshi, Archanna Guptaa and South Indian actor Vineeth as Mukta. It won several awards in the international circuits but was a commercial failure. 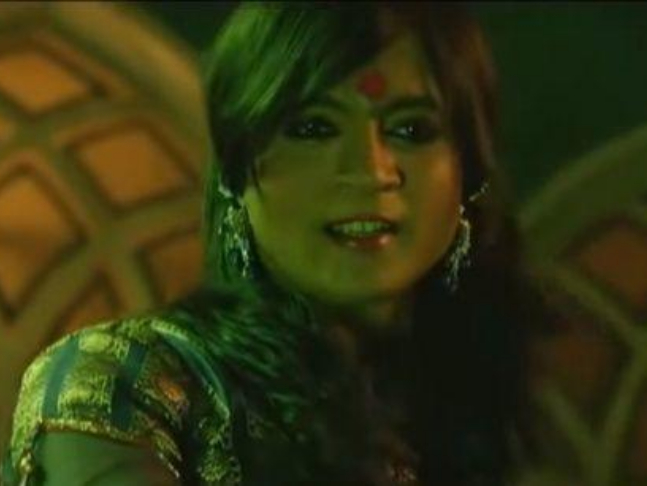 Prashant Narayanan plays a man who castrates himself and becomes a eunuch in this film starring Emraan Hashmi and Jacqueline Fernandez in the lead. However, he plays a serial killer in the film that is out to kill prostitutes and hookers. With Murder 2, the makers once again portrayed a character that does not identify himself as a man or a woman in a negative light. Ravi Kishan played a dual role in Tigmanshu Dhulia’s film Bullett Raja that had Saif Ali Khan in the lead. He plays a man as well as a woman in the film. Mahesh Manjrekar plays a eunuch in the film starring Kangana Ranaut and Paras Arora. He plays a brothel owner called Begum and once again is the villain in the story. 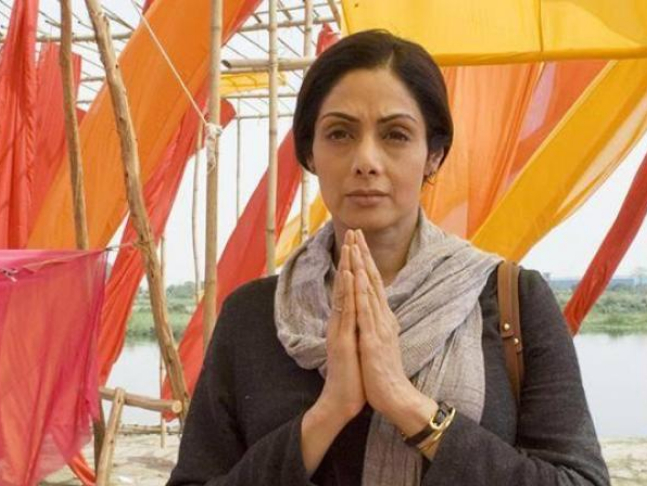 Sridevi’s last film Mom had not one but two characters from the hijra community in pivotal roles. Playing students of Sridevi’s Devaki, they help her avenge the gang rape of her step daughter, thereby showing them in a positive light for once. 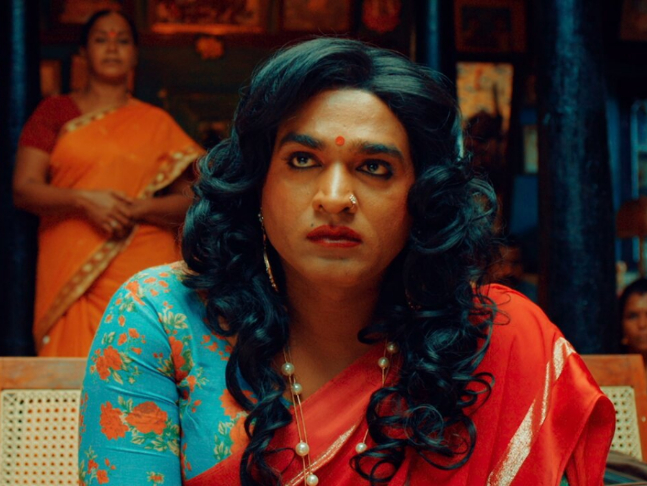 Super Deluxe is a 2019 Tamil film starring Vijay Sethupathi, Fahadh Faasil, Samantha, and Ramya Krishnan in leading roles in separate segments while Mysskin, Gayathrie, Ashwanth Ashokkumar, Bagavathi Perumal, and Mirnalini Ravi play supporting roles. Vijay plays a transwoman named Shilpa in the film. However, the character was subjected to numerous harassment and humiliation in the film and Vijay’s character even puts a curse in the traditional style of the hijra on the policeman who has been harassing her. However, the only redeeming fact of the film was that his family accepts him for what he is eventually making it a happy ending.