The entire country is celebrating the auspicious festival of Diwali today. With lighting of diyas, making rangolis, putting up garlands on our doors, praying, feasting and spending time with family, lighting firecrackers is also an integral part of the Festival of Lights.

However, since this year around, many states have banned the use of firecrackers and many people have resorted to spending a quiet pollution-free Diwali, here is a list of Bollywood celebs who can personify the different pataakhas available in the market. 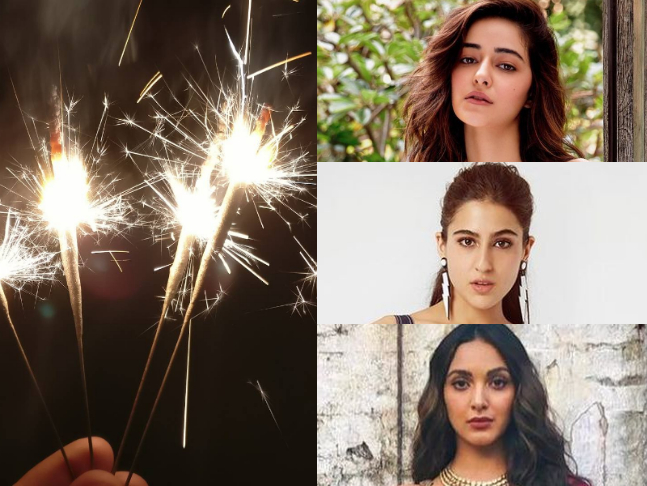 The humble phuljhadi or sparkler is preferred by big and small. Phuljhadis are always a safe bet when it comes to firecrackers. Usually when a child is being introduced to the firecrackers they are given this first to light and same goes for the elderly when they are feeble in limbs. However, phuljhadis are one of the best pataakhas, they come in different colours as well, are bright and makes hardly any noise. They are also used to light other firecrackers, so have multi uses. Our newbies Ananya Panday, Kiara Advani and Sara Ali Khan make for a perfect fit as they have found a place in everyone’s hearts with their spunk and spontaneity. Like phuljhadi they are also taking bidding their time but once their films release they definitely light up the screen. 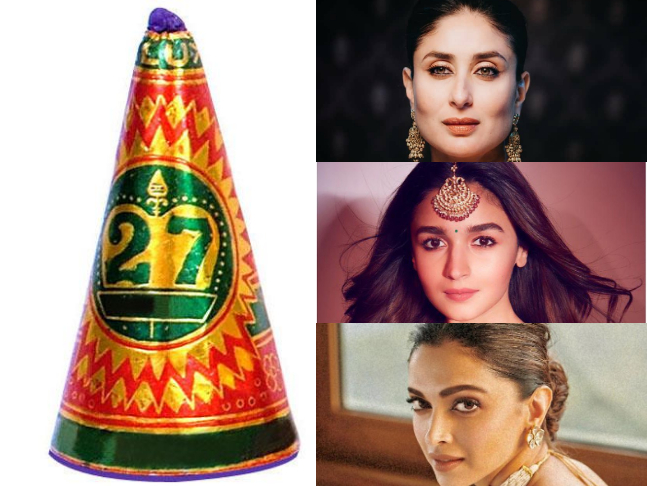 Anar or Flower Pots are the classic favourite. With sparkling fire shooting as high as stars, they are a delight to watch and light. It also requires lots of valour as you have to go pretty near it to light it and once it does it bathes everyone in its warm and glittery glow. Deepika Padukone, Alia Bhatt and Kareena Kapoor Khan personify flower pots perfectly. They are loved by one and all and once they take up a role they ensure they shine the brightest in that film. 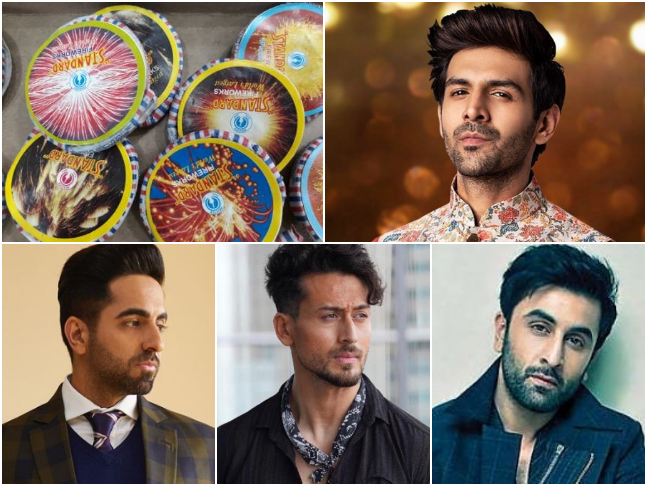 Flashes on the ground in whirling motion! Chakri or ground spinners are a treat to watch but are tricky little blighters to light, but once done, their spins provide countless happy memories. As kids we have all jumped on those sparks till it went off. Our young guns Tigers Shroff, Ayushmann Khurrana, Kartik Aaryan and Ranbir Kapoor are just like chakris. Tiger for his effortless martial arts and dance skills, Ayushmann for his different and hatke roles and Ranbir for being grounded and taking hits and misses in his stride with equal measure. Kartik personifies a chakri completely, the actor is quirky not only with his film roles but also with his YouTube channel Koki Poochega and social media game that is always on point. He ensures with his every social media post his fans have a hearty laugh. 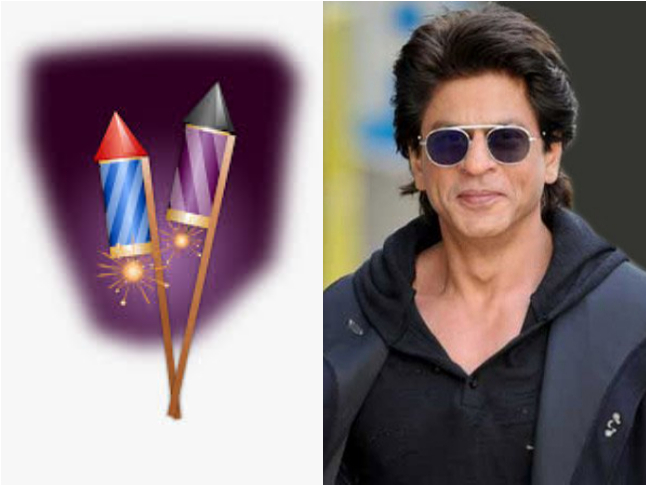 Rockets are tricky little pranksters, one moment they are nicely resting in an empty glass bottle, looking innocent and the next moment they rise up in the air with a whoosh and bathe everyone in its bright light and sound. They belong to the trickster clan of fireworks hoodwinking us with their intentions of burning or not burning and eventually when they do they reveal their artistry in all glory. Badshah of Bollywood, Shah Rukh Khan is just like a rocket. Right now, he is behaving and hoodwinking us all into believing that his game is up as none of his films are working but once he lights up, he makes everyone else pale in comparison. A rocket is a herald of a person lighting a firecracker and our SRK is just like that, he is the face of Bollywood, and lord of all he perceives. 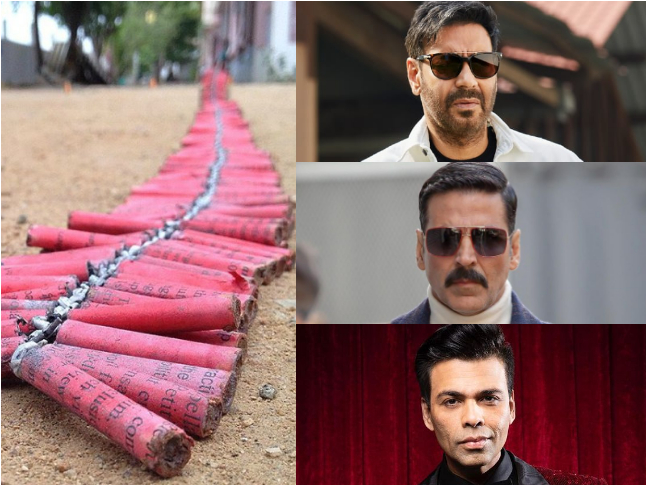 Ladis are one noisy game of a firecracker. They make a big sound, are bright and continuous just like Akshay Kumar, Ajay Devgn and Karan Johar. Akshay’s streak of giving four-to-five films in a year that all turn out to be big grossers make him like this particular firecracker. On the other hand, Ajay is a star who has had a continuous run at the box office whether it is through acting, production or direction. Karan Johar is Bollywood’s biggest producer and has an incessant line-up of lucrative projects in various stages of production throughout the year. Snakes are firecrackers that are lighted in the morning as they are small black pellets that give off a ‘whizz’ like noise and end up in a coil-like substance that resembles a serpent. When we think of this firecracker Shraddha Kapoor comes to mind with her Nagin franchise in the works as well as her soft, next-door-girl demeanour. 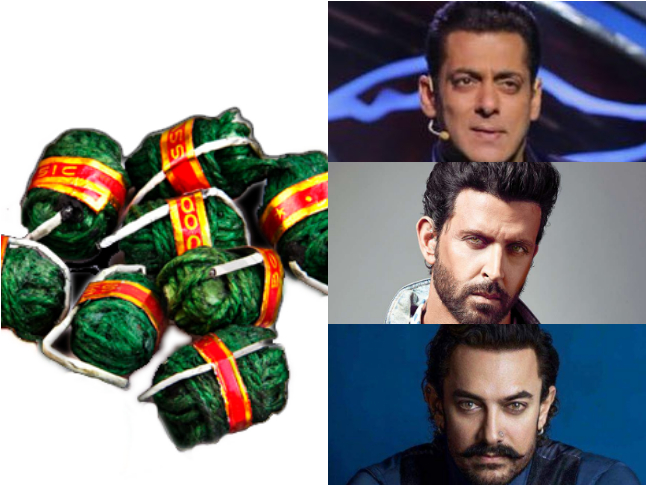 These were probably the most cacophonous firecrackers available in the market at one point of time. A single bomb had the capacity to instil the most humongous boom that made people shake till their very bones, not to say about the anticipation of the impending explosion. Our Salman Khan, Aamir Khan and Hrithik Roshan fall in the bracket of chocolate bombs. They come up with usually one solitary film a year that ends up creating the biggest noise at the box office. 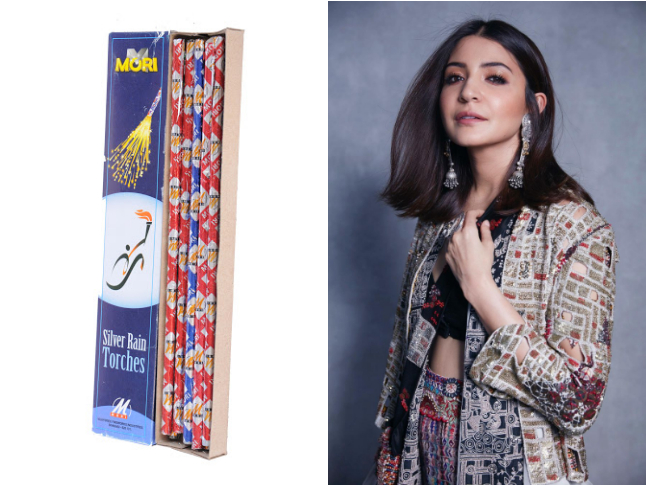 Pencil or Torch are innocent, quiet little firecrackers that burn brightly with little noise and are a delight to watch. They are also used to burn other fireworks. Anushka Sharma fits to the T as a Pencil or Torch firecracker. She is devoid of any controversy, burns bright with her acting and production projects and her own role. Multishots are sometimes rocket like firecrackers or like chocolate bombs but they give out not one but a series of blasts just like our very own desi girl Priyanka Chopra. She is multidimensional like the firework, excels in Bollywood as well as Hollywood, and is an ace actress and a sharp-minded businesswoman and producer to boot. When she shines, she makes everyone else cower in front of her. Popping strips or popping reels are actually used as bullets for small guns that children play with during Diwali. They make intermittent noise and roll on their own once fitted into the cartilage of the revolver. Our youngest superstar in the making Varun Dhawan is just like a popping strip or popping reel. He continues to give back-to-back hits throughout the year and makes noise when all the bigwigs are lying low.

'Loudspeakers make announcement, I will gently allow my films to enter your hearts,' says Shah Rukh Khan during 'Ask SRK' session, reveals he is in a phase of 'rebuilding'

Minissha Lamba refutes rumours of undergoing plastic surgery to maintain her 'girl next door' look, says 'that is ridiculous'