Advertisement
HomeFASHION & LIFESTYLELifestyleWish us all luck as we navigate through such situations: Tillotama Shome SHUTS down a troll demanding her nude picture

Actress Tillotama Shome has always been a body-positive person and her social media posts reflect that very fact. Recently, she hit back at a troll who slid in her Instagram DM, demanding to see her ‘nangi body’ picture like her fellow actor Rytasha Rathore.

Sharing the screenshot of the message after taking Rytasha’s due permission, the actress penned down a powerful note talking about the power of the naked body and fighting off such trolls.

Recommended Read: Not sorry about it! ‘Un-apologetic’ Tillotama Shome flaunts her unwaxed armpits, clarifies she isn’t making a statement

Opening up on her prior struggles with intimacy and nudity on screen, Tillotama shared a memory from the sets of her film Qissa where she had to disrobe herself for a scene. “The first reaction at seeing my own breast was a recoil at the feeling of someone watching me. The nipples looked like eyes and I felt I was watching myself. And then comes the release, of not caring about being watched. I knew in that moment the power of the naked body as it relates to protest and political action. What the body communicates, and what decorum a spectator should inculcate,” she said.

Calling nudity an act of self-acceptance and love, she spoke about how actresses still have to deal with such cyber-attacks. “BUT the theater of feminist protest is both expanded and challenged by this new generation of cyber-attacks. I wish us all luck as we navigate through such situations and yet continue to transgress in our own ways and at our own pace,” she concluded.

Netizens lauded the actress for gracefully shutting down the troll and penning down such a strong thought. “Don't let these creeps and their horrid mindset get to you... You're amazing. As is Rytasha. Lots of love,” said one user, “More power to you and the Art you express. Neglect them. They are everywhere,” commented another. 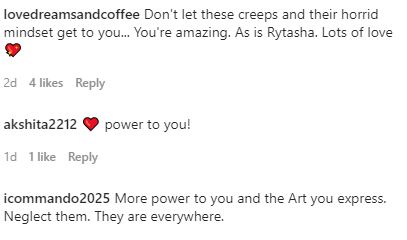 It’s 2022 and actresses as well as women in general, are bullied by the cyber-attackers by such absurd comments. It’s time we all give them back. More power to you, Tillotama!

Bored of the monotony, Shilpa Shetty Kundra goes on digital detox till she finds a ‘new avatar’