Amidst the communal unrest in the United States of America triggered by the killing of an African-American man George Floyd, the fashion fraternity has stood in unison against the deep-rooted racism. After pledging their contributions to the Black Lives Matter Movement, the fashion and beauty brands have taken up another initiative. Called ‘Pull Up for Change’ challenge, this initiative reveals the racial diversity of the brand.

It’s really hard to ‘Keep up with the Kardashians’ these days due to their never ending controversies. Kylie Jenner’s beauty brand Kylie Cosmetics took a part in this challenge and shared their diversity percentage. A post shared by Kylie Cosmetics stated their brand to be 100 % women-identifying with 47 percent of BIPOC (black, indigenous and people of colour) employees, out of which only 13 percent are black while rest 53 percent are white.

Kylie Cosmetics is here for Pull Up for Change, for our team, and for the black community. We are proud of the diversity within our company, with a team of Black, White, Asian, Native American, Hispanic and Middle Eastern women. As our team grows we commit to a continued focus on ethnic diversity in the workplace and the recruitment of black employees. The numbers you see above represent the people at our Kylie Cosmetics/Kylie Skin HQ. Our leadership team is made up of two people, @Kyliejenner and @KrisJenner. Thank you @pullupforchange and @heysharonc @uomabeauty for bringing an important issue to the forefront of the conversation in our industry. #PullUpForChange

Moments after this post, Kylie’s brand received a backlash for constituting a minimal black workforce percentage in her company. However, there were others who defended the brand saying they were honest with their numbers.

Post Kylie, half-sister Khloe Kardashian and her denim brand Good American also came under the fire for having a minimal 15 percent of the black workforce.

Good American is here for the @pullupforchange challenge and we’re proud to be one of the first fashion brands to participate. Diversity and inclusion has always been at our core, so we see this as an opportunity to highlight the consistent and constant work our brand has done to ensure our mission is felt at all levels of the company. We are committed to continuing our focus on diversity throughout our organization: both within the talent and partners we work with and the employees at our office. We refuse to be complacent. Please note that our numbers add up to 99% because we had 99% participation from our employees

Just like Kylie, Khloe participated in the ‘Pull up for Change’ challenge and revealed her diversity number as 25 percent white workers, 32 percent person of colour and 15 percent black employees. 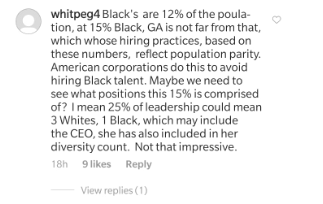 Although there’s a long way to go, this counts as a start?