Scandals, sensational news or good old masala- Bollywood has something new to offer every day! For the past few days, many of our tinsel towns divas made headlines for both right and wrong reasons.

While some tested the deep waters of entrepreneurship and turned brand ambassadors, others came under fire for their ignorant plagiarism. Missed the goss?! Don’t worry we got you covered!

Not long ago, Priyanka Chopra Jonas joined the family of Bulgari as its global brand ambassador on August 1, 2021. Recently, the two of the powerhouses teamed up to launch an exquisite piece of jewellery exclusively for India- Mangalsutra! The Desi Girl flaunted the statement piece on her Vogue’s recent cover where she also announced this creative collaboration.

Made of 18-carat gold with black onyx inserts and diamonds, the ‘traditional and sacred’ ornament is called Bvlgari Bvlgari necklace. This contemporary and stylish jewel- deep-rooted in culture represents the cosmopolitan aspirations of a modern bride and costs a whopping Rs. 3,49,000.

However, unlike PeeCee, some netizens weren’t sold on the Bulgari mangalsutra and criticized it as a symbol of patriarchal oppression whereas others supported the desi girl saying it’s important for her to inculcate her culture into her work.

PC wearing a Bulgari Mangalsutra for the new Vogue cover has me retiring for the week, so much for symbolising opression

how is Priyanka Chopra creating a mangalsutra being global ambassador of Bvlgari something offensive?
Being an Indian woman herself if she feels that it is important for her to inculcate her culture into her work, how is it wrong?
I honestly think it's beautiful & I'm here for it pic.twitter.com/0bpKSxbK13

Recently, actress Malaika Arora took her entrepreneurship pursuit a notch higher and announced the launch of Malaika Arora Ventures, her newest gig of handpicked tie-ups that will bring a certain lifestyle, wellness and fashion brands under one roof. Previously, the model-actress has partnered with fashion brand The Label Life as one of its style architects and also co-owns the wellness chains of SARVA Yoga, thus expanding her horizon in a two-decade-long career. Most recently, Malaika joined hands with food tech startup Rebel Food to start a ‘delivery-only service Nude Bowl’ making her presence strong in all three sectors. This step definitely makes her a bankable celebrity to co-create business with.

Speaking about the same, Malaika said that this newly-launched venture “aims to establish itself as one of the major players in the ‘comprehensive wellness’ sector”, “Our goal at Malaika Arora Ventures (MAV) is to actively look out for and purposively invest in lifestyle, health and wellness brands. Label Life, SARVA Yoga and now Nude Bowl have been our first steps in each of the three directions we have had in mind- Fashion, fitness and wellness. But that's not it. We are already in talks with more such brands and expanding ourselves into the overall well-being segment, including beauty and health. I personally believe in the comprehensive well-being of our body. Concentrating on just one, does not support the other. So the idea is to promote good health inside out and we have barely scratched the surface as of now. MAV plans to dig deeper and establish itself as one of the major players in this sector." According to the actress, MAV isn’t about short-term goals. Most of these businesses have a long-term vision of developing into a 100crore plus brand.

Speaking about the association, MAC India stated that the actress is a perfect fit as “she epitomises the brand values and serves as an inspiration to girls everywhere who dare to dream.” “Bhumi is a natural fit for a brand like MAC which celebrates individuality and self-expression above all else. She brings alive MAC’s ambition to inspire millions of young Indian girls, as she has always believed in the power of beauty as a positive process that promotes self-love and embraces flaws,” the company said in a statement. Sharing the same level of excitement Bhumi added, “As a teenager obsessed with the idea of beauty, for me to actually be able to own MAC products made me feel like I have really achieved something in life. I’m so excited to be working with a brand whose values and ethics resonate so strongly with me and I look forward to having an amazing journey with MAC.” 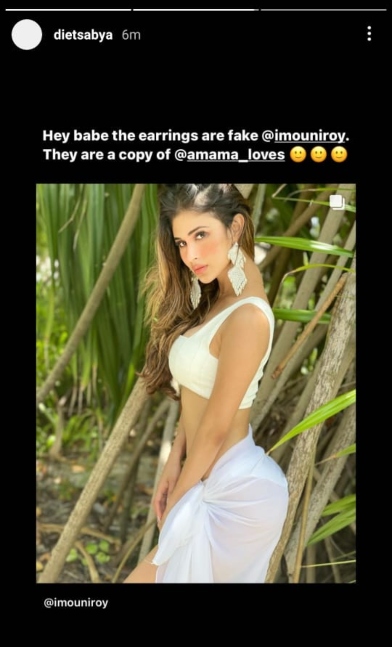 Lately, actress Mouni Roy faced flak from Instagram’s fashion police Diet Sabya for flaunting jewellery brand Amama’s rip-off earrings, made by Jhanjhariya. DS took it to their Instagram story to highlight the fake copies and captioned the picture, “Hey babe the earrings are fake @imouniroy, they are a copy of @amama_loves”

Instagram influencer Kusha Kapila also pointed out the original brand’s blatant copy and highlighted it in her story. Check out the OG earrings by Amama.

Co-incidence? We think not!

So, which news shocked/delighted you the most?

Not something I believe in: Newlywed Rhea Kapoor ‘respectfully’ asks brands to not reach out for gifting or collaborations ahead of Karva Chauth celebrations

Manish Malhotra revolutionizes the fashion game as he becomes the first Indian designer to drop an NFT, gets sold out in seconds!