Not much long ago, Grammy winner Pharrel Williams teased his partnership with Tiffany & co getting all the fashionistas on the block anticipated and excited. Calling it an ‘engagement’ between the two, Pharrel debuted the collaboration’s first piece sitting in the first row of NIGO’s debut show at the Parish Fashion Week- customized teardrop-shaped sunglasses! “I can’t give it all away now. I don’t want to go too much into detail, OK, because we’re here today to celebrate my brother NIGO,” the singer told WWD at the fashion show.

Tifanny, too, posted a picture of Pharrel flaunting the latest piece from their under-the-wrap collaboration. However, moments after this post, the jewellery community of the fashion circuit along with the fashion police Diet Prada pointed out the uncanny resemblance it bore with something extraordinarily rare already present on Sotheby’s website. Oops!

Recommended Read: Love is Pain: Machine Gun Kelly designed Megan Fox’s engagement ring ‘to hurt’ if she takes it off!

According to Diet Prada, the studded Tiffany sunglasses ‘custom-designed for the singer is a blatant rip-off of ‘extraordinarily rare Mughal spectacles’ present on the site of Sotheby’s. Dating back to the 17th century these frames were believed to have belonged to Mughal emperors who ruled over India.  “One pair of teardrop-shaped frame lenses are believed to have been cut from a Colombian emerald over 300 carats. The other, likely cleaved from a 200-carat diamond found in Golconda, a region in the present-day Indian states of Telangana and Andhra Pradesh. The spectacles were designed to help the wearer reach enlightenment and ward off evil.” read an excerpt of its caption.

Jewellery expert and Vanity Fair and Vogue Contributor Annabelle Davidson too took it to her social media account and called out the rip-off creation. “I think @tiffanyandco made a mistake in not referencing the pair so many of us saw last year - us jewellery nerds may be a weird bunch but we do notice these things,” read an excerpt from her caption.

Tiffany too, came under fire for not citing the root inspiration behind these sunglasses. Netizens called out the jewellery brand for blatantly picking up this antique piece. 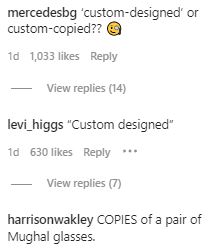 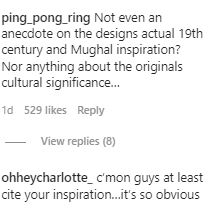 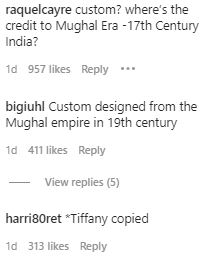 As reported by the fashion watchdog, these two rare frames were expected to fetch as much as 2.5M GBP as valuation, however, they never got sold. “As far as we know, there are no others like them," Gibbs told CNN at the time,” quoted Diet Prada.

Well, what are your thoughts on this?

If everyone is done hating... here are some more: Aamir Khan's daughte

A slap in the face to those actually facing poverty: Netizens disapprove of Balenciaga’s overly distressed Paris sneakers

Unless I can go and honor Virgil Abloh & wear Off-White: Kylie Jenner reveals the real reason behind her bridal MET Gala 2022 look!