Eminem has mentioned Mahatma Gandhi in his rap from Venom movie 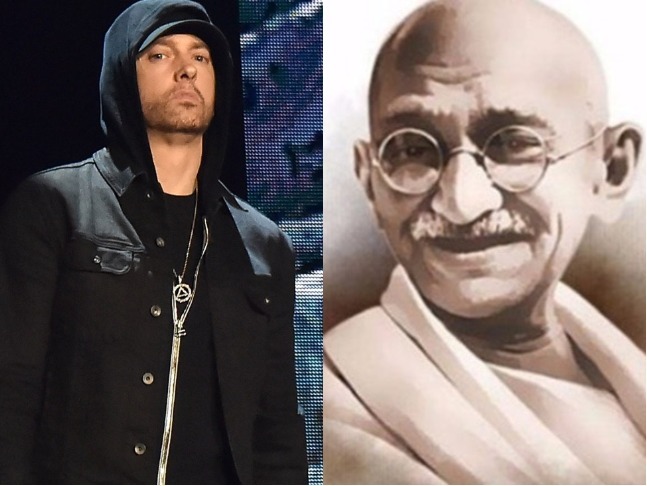 Rapper Eminem has put in references to India and the Father of the Nation Mahatma Gandhi in the theme song of the forthcoming film Venom.

The film features Tom Hardy as Eddie Brock and as Venom. Eminem has created a new track for the film in his album Kamikaze.

According to a statement to IANS, he has mentioned Mahatma Gandhi and India in the track.

Eminem, whose real name is Marshall Mathers, first gave a teaser of the song on Twitter, posting a 15-second video with lyrics: "Venom, knock, knock, let the devil in", followed by the sounds of an animal roaring and a man crying out in pain in the background.

The lyrics go as: "Knock knock, let the devil in, malevolent...As I've ever been, head is spinnin' and this medicine... Screaming, 'Let us in'."

Recommended Read: Coachella 2018 Headliners: Beyoncé, Eminem and The Weeknd to perform this year

"V-venomous, the thought spun...Like your web and you just caught in 'em...Held against your will like a hubcap or a mud flap...Be strangled or attacked...So this ain't gonna feel like a love tap...Eat painkiller pills, fuck a blood track...Like, what's her name's at the wheel? Danica Patrick."

He continues: "Threw the car into reverse at the Indy, end up crashing...Into ya, the back of it -- just mangled steel My Mustang and your Jeep Wrangler grill...With the front smashed, much as my rear fender, assassin... Slim be a combination of an actual kamikaze and Gandhi.

"Translation, I will probably kill us both... When I end up back in India... You ain't gonna be able to tell what the f**k's happening to you...When you're bit with the..."

According to ScreenRant, the rapper compares himself to the bloodthirsty symbiote. It has minimal references to the actual plot of the movie.

Venom was created in 1988 by Marvel Comics. The character made his big screen debut more than a decade ago in Sam Raimi's Spider-Man 3, where he was portrayed by Topher Grace. The movie is intended to be the first film in Sony's Marvel Universe.

Sony Pictures India will bring the film to India. It is slated to release in October.