The enmity between their on-screen characters was taken to the next level when Sophie Turner who plays Sansa Stark took a playful opportunity to roast Cersei’s new found liking to elephants, which fans saw in the first episode of Game of Thrones S8.

Cersei’s obsession with wanting elephants sparked a meme fest all over social media with Sophie joining in on the fun. She took to Instagram to share a collage of herself dressed as an elephant along with queen Cersei captioned, “You’re welcome Cersei” on her IG story. 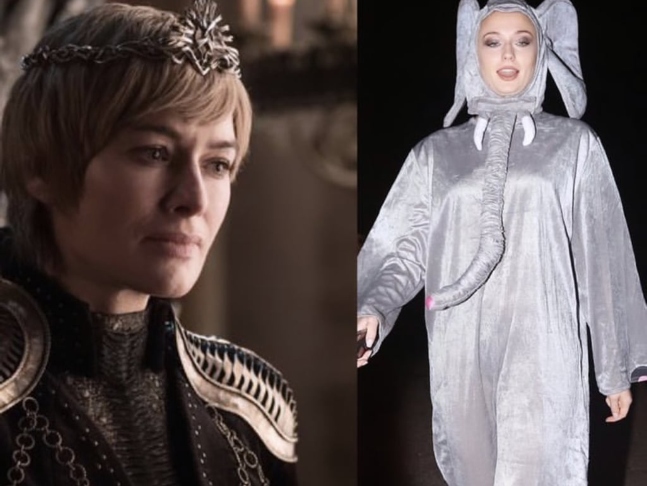 Recommended Read: I had no motivation to do anything: Game of Thrones Star Sophie Turner on struggling with depression

To give clueless fans some backstory, Euron Greyjoy brought back the army of mercenaries and horses - The Golden Company, along with him back to King's Landing but without the elephants, Cersei had been promised. Disappointed, Cersei said, “I wanted those elephants”.

Sansa and Cersei aren’t particularly fond of each other in the hit HBO show. It started with Cersei wrongfully executing Sansa’s father Ned Stark in season one. Even though the two strong female characters haven’t crossed paths since Sansa fled King’s Landing after Joffrey Baratheon’s death in season four, they still continue to be on opposite sides of the war to come.

Viewers can catch Sansa and Cersei in the eighth season of Game of Thrones which premiered worldwide on April 15. This is the last season of the show which will decide the fate of all the remaining characters.

There really was no other option: Prince Harry on stepping back as royals with wife Meghan Markle

'Parasite' to 'The Crown' and Brad Pitt to Jennifer Aniston: Meet the big winners of SAG Awards 2020

I am going to use my voice whenever I see a blatant misuse of power: Robert De Niro goes political at the 2020 SAG Awards

From her reaction to his acceptance speech to their reunion back stage, Jennifer Aniston and Brad Pitt steal the show at 2020 SAG Awards

YouTube star PewDiePie posts his last video before taking break; says, 'I just feel like I need to do this'

Bigg Boss 13: Umar Riaz and Parag Tyagi infrom Asim that Himanshi Khurana has broken up with her boyfreind, deliver him a special message

Allu Arjun thanks fans for making 'Ala Vaikunthapurramuloo' a magnanimous hit; 'Sarileru Neekevvaru' marks Mahesh Babu's third back to back release to cross Rs 100 crores

It's every citizen's responsibility to take care of our precious planet: Shilpa Shetty on being awarded the Champion of Change 2019 Award

Filmmakers in our country are literally de-valued, this industry is of the actors: Kangana Ranaut

Ashwiny Iyer Tiwari dismisses rumours of 'Panga' actress Kangana Ranaut ill-treating others, says 'she isn't a Dracula but a human being'

Inside Pics: #AyushmannKhurrana pens down a heartfelt note on #TahiraKashyap's birthday, hosts a house party

Amala Paul to star in a web series based on the life of late actress Parveen Babi produced by Mahesh Bhatt?

Has Akanksha Puri called it quits with Bigg Boss 13 contestant Paras Chhabra post his statement advising her to move on?

Bigg Boss 13 Day 113 Highlights: Rashami Desai calms Sidharth Shukla as he gets into a major spat with Asim Riaz during Elite Club task