Ryan Reynolds sneaks in jab at buddy Hugh Jackman in congratulatory post, calls him a 'b***ard'

Actor Ryan Reynolds was full of praise for his friend Hugh Jackman as he celebrated the star being honoured with Australia's Companion of the Order title. Jackman was awarded the highest of the four levels of the Order of Australia, and was joined by his wife of 23 years, Deborra-Lee Furness, for the ceremony by Governor General David Hurley in Australia's capital Canberra on September 13, reports aceshowbiz.com.

While The Wolverine star enjoyed the moment, Reynolds praised his friend on social media. "Hugh is one of the finest, kindest, hardest working, generous and most talented people I've had the privilege to call my friend, There's nobody better," he wrote. The Deadpool star later re-posted a photograph of Jackman after his win, joking in the caption: "None of this changes the unfortunate fact he's a complete b**tard." 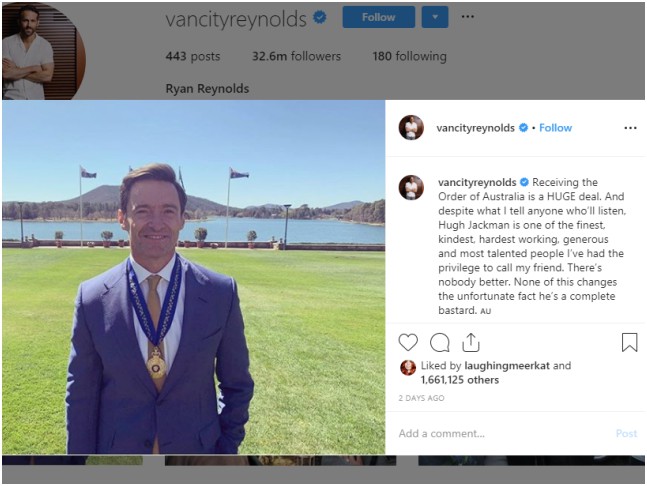 The actors are longtime friends, and were famously involved in a friendly feud as Reynolds tried his best to convince Jackman to reprise his role as the popular Marvel Comics character one more time for a feature in a future Deadpool film - after Jackman announced 2017's Logan would be his last outing as Wolverine.

Ryan and Hugh have been friends for a long time, and are a pro to pull each other's leg on social media platforms.