The rumours that both Kourtney Kardashian and Khloe Kardashian were fighting for the attention of Brad Pitt have been dismissed, after it was suggested that the sisters met the actor at the Sunday service hosted by their brother-in-law Kanye West. An international portal had quoted a source saying, “They were swarming around Brad like bees to a honeypot. But Kourt definitely dominated. She got very flirty with Brad and he was clearly lapping up the attention. There was a real spark between them."

However, the reports were shut down when a fact-checking website stated that they found ‘no evidence’ of the reality stars interacting with Brad at the Sunday service. There were multiple pictures of Kanye and Brad but none with the Kardashian sisters. The website stated, “There are multiple photos and videos of West and Pitt exchanging greetings, but nothing showing the Kardashian sisters talking to him. While it’s certainly possible some of the sisters briefly met Pitt, they didn’t get physically flirty or trade numbers with him. There were hundreds of people in attendance at West’s Sunday Service, so it’s nearly impossible that there wouldn’t be at least one photo of such an interaction." 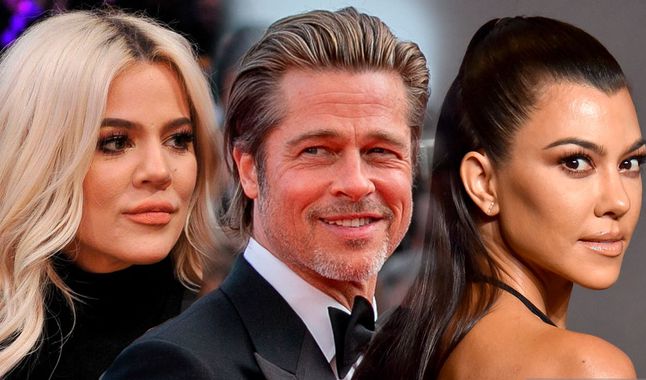 The site also contacted Brad’s representatives who dismissed the claims. Several videos from the service have emerged online where we get to see Brad getting along famously with Kanye. It was earlier reported that Kanye had tried to set up Khloe with Brad. In fact, Khloe had previously owned up about having a crush on the actor. She told Howard Stern during a 2016 radio interview, "Bring in Brad Pitt and I'll f**k him on air. (He's) really good looking." On her website she had written after his split from Angelina Jolie, “He's handsome. I love him (but) I didn't like him when he was super young, like in Thelma & Louise."

An Australian portal had claimed in very unflattering terms that the sisters were trying to outdo each other to impress Brad during the Sunday Service. They had written that Khloe and Kourtney were “swarming around Brad like bees to a honeypot. But Kourt definitely dominated. She got very flirty with Brad and he was clearly lapping up the attention. There was a real spark between them."

Keeping Up With The Kardashians: Kim wishing she hadn’t married more than once & other bomb revelations made by Kylie, Kendall on KUWTK reunion special

Watch: Jennifer Hudson transforms herself into Aretha Franklin in this BTS video from Respect

Billie Eilish apologizes for using racial slur against Asians in old video, says 'I am appalled and embarrassed'

‘Black Widow has moved away from hyper-sexualisation,’ says Scarlett Johansson as she slams her portrayal in ‘Iron Man 2’