Daniel Radcliffe has broken his silence and shared a lengthy response on controversial anti-trans tweets posted by Harry Potter author JK Rowling. Rowling’s tweets created a controversy where many people accused her of being a ‘transphobe’. Daniel wrote an essay and posted to the website of the Trevor Project, a non-profit dedicated to crisis intervention and suicide prevention for LGBTQ people.

In his statement, Daniel wrote, “I realize that certain press outlets will probably want to paint this as in-fighting between J.K. Rowling and myself, but that is really not what this is about, nor is it what’s important right now. While Jo is unquestionably responsible for the course my life has taken, as someone who has been honored to work with and continues to contribute to The Trevor Project for the last decade, and just as a human being, I feel compelled to say something at this moment.” 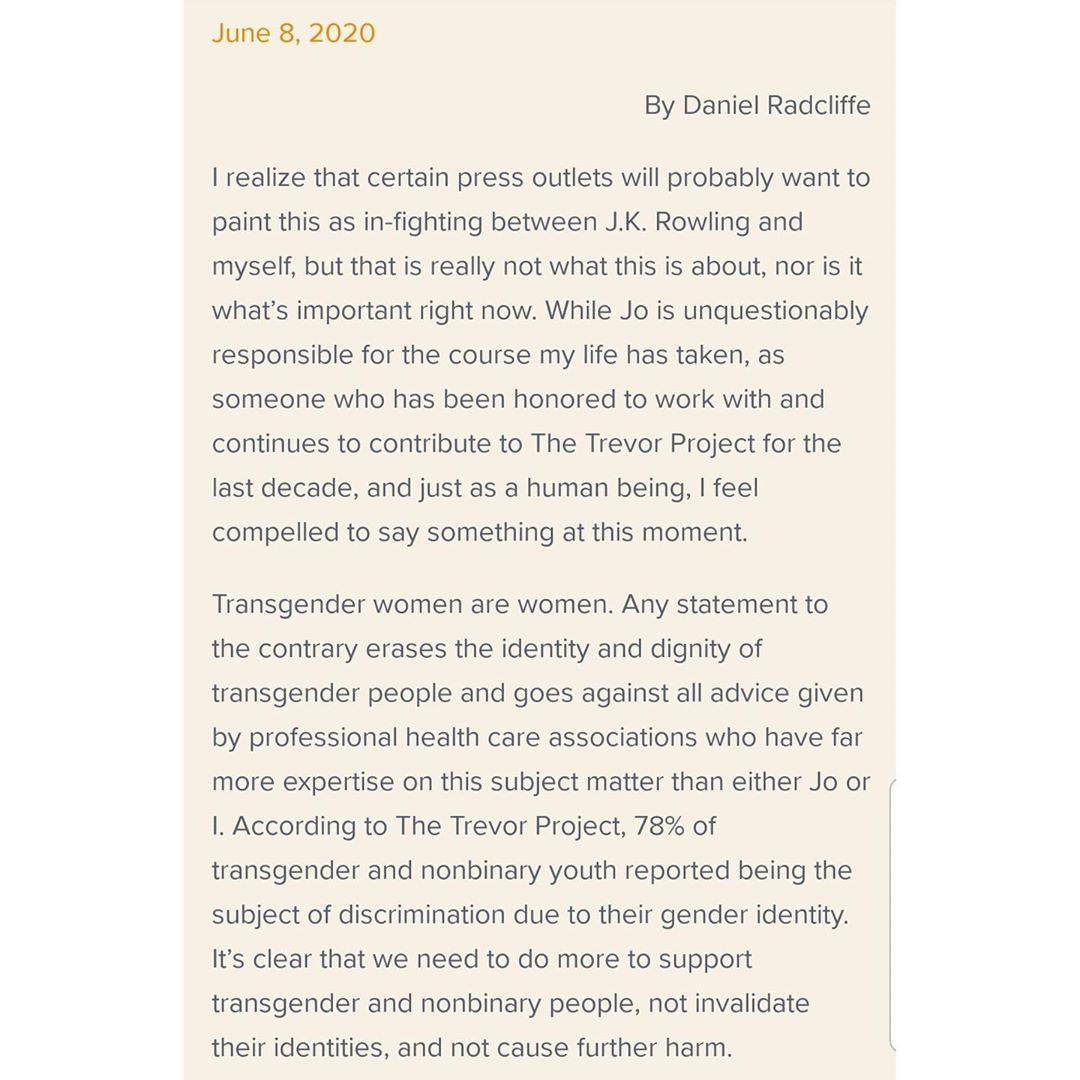 RECOMMENDED READ: Watch: ‘I congratulated him but it is super weird that we are all old enough to have children,’ says Daniel Radcliffe on his ‘Harry Potter’ co-star Rupert Grint becoming a father

He emphatically stated, “Transgender women are women. Any statement to the contrary erases the identity and dignity of transgender people and goes against all advice given by professional health care associations who have far more expertise on this subject matter than either Jo or I. According to The Trevor Project, 78% of transgender and nonbinary youth reported being the subject of discrimination due to their gender identity. It’s clear that we need to do more to support transgender and nonbinary people, not invalidate their identities, and not cause further harm.” 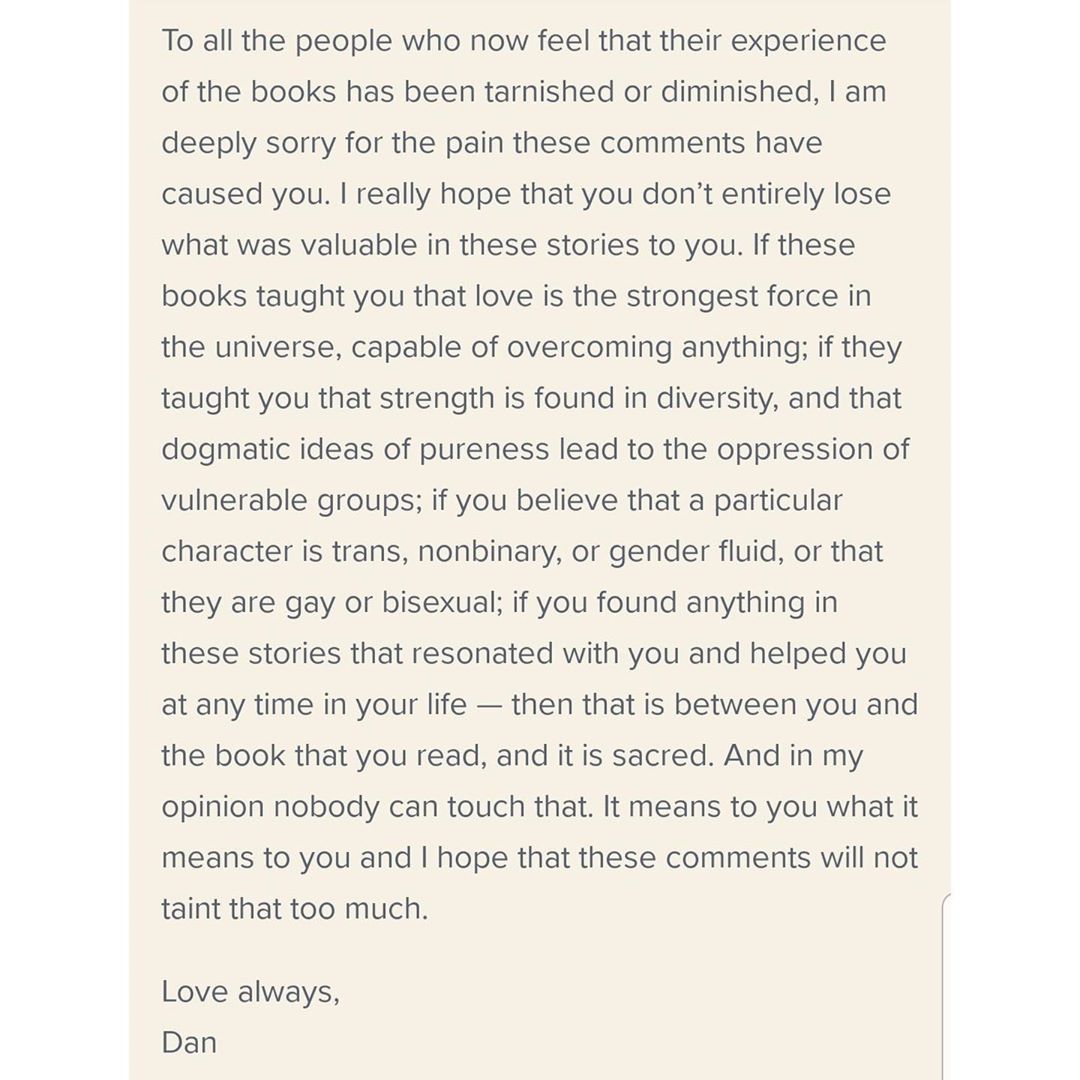 Daniel also apologized to Harry Potter fans if they were hurt by Rowling’s comments and wrote, “To all the people who now feel that their experience of the books has been tarnished or diminished, I am deeply sorry for the pain these comments have caused you. I really hope that you don’t entirely lose what was valuable in these stories to you.”

He further added, “If these books taught you that love is the strongest force in the universe, capable of overcoming anything; if they taught you that strength is found in diversity and that dogmatic ideas of pureness lead to the oppression of vulnerable groups; if you believe that a particular character is trans, non-binary or gender fluid, or that they are gay or bisexual; if you found anything in these stories that resonated with you and helped you at any time in your life — then that is between you and the book that you read, and it is sacred. In my opinion, nobody can touch that. It means to you what it means to you and I hope that these comments will not taint that.” 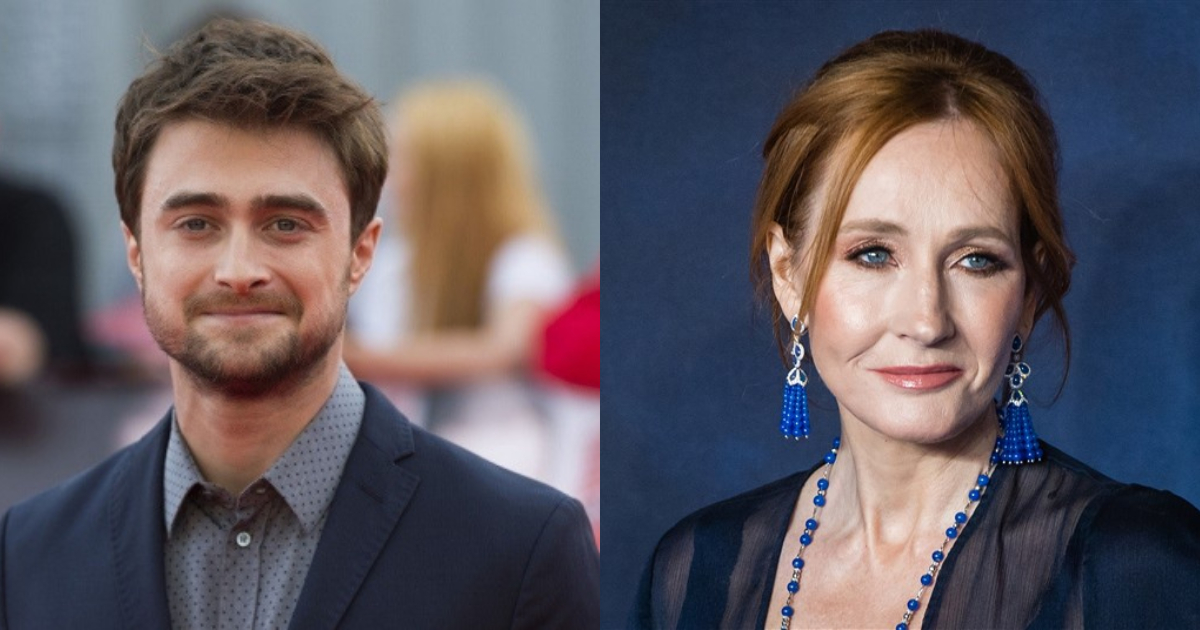 Rowling faced backlash over the weekend for making anti-trans tweets as she took issue with the phrase "people who menstruate" in an article written for Devex. "'People who menstruate.' I'm sure there used to be a word for those people," Rowling tweeted Saturday evening. "Someone help me out. Wumben? Wimpund? Woomud?" She also posted an additional series of tweets on Saturday night trying to defend and explain her earlier, by-then-viral statement. Rowling posted a series of tweets in which she argued that discussion of gender identity invalidates biological sex.

‘People who menstruate.’ I’m sure there used to be a word for those people. Someone help me out. Wumben? Wimpund? Woomud?

Rowling wrote, “If sex isn’t real, there’s no same-sex attraction. If sex isn’t real, the lived reality of women globally is erased. I know and love trans people, but erasing the concept of sex removes the ability of many to meaningfully discuss their lives. It isn’t hate to speak the truth. The idea that women like me, who’ve been empathetic to trans people for decades, feeling kinship because they’re vulnerable in the same way as women — ie, to male violence — ‘hate’ trans people because they think sex is real and has lived consequences — is a nonsense.