Selena Gomez has released her first Spanish language single in nearly a decade titled De Una Vez (At Once). The song released stateside via Interscope Records and UMG worldwide and is available for download via digital platforms. Through the song, Selena celebrates her Latina roots and it was important to her to join forces with some of the industry’s most influential Latin creators in order to communicate the purest vision possible.

For De Una Vez, Selena teamed up with multi-Latin Grammy Award-winner and powerhouse producer Tainy joined by Albert Hype, Jota Rosa and NEON16. Additionally, she enlisted the duo of Los Pérez— Tania Verduzco and Adrián Pérez—to direct the accompanying music video. She styled her look in the video as a tribute to Mexican artist Frida Kahlo.

In an exclusive interaction with Selena, PeepingMoon.com got an opportunity where the global sensation spoke about her Spanish single and embracing her cultural roots. 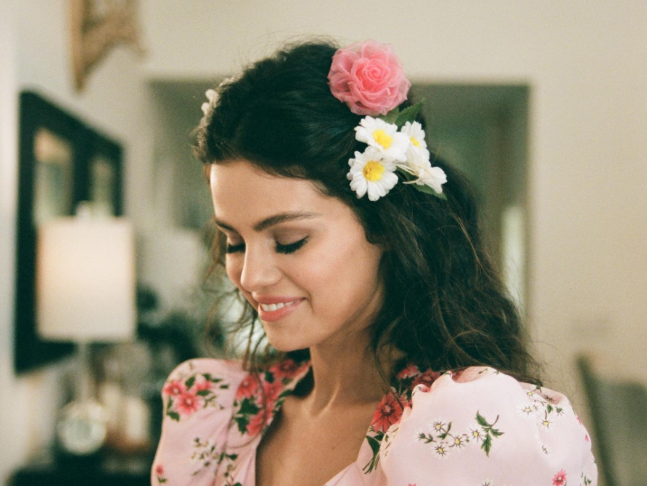 What was the inspiration behind the music video?

Embracing my heritage as a proud Latina, I wanted to immerse in the culture and Magical realism has always been part of the Latin culture, whether it be in art or telenovelas. I wanted to capture that sense of a supernatural world.

What was it like working with a Latin director and crew?

It was magical. From the very beginning, they got the sense of what a great love anthem the song is and how to bring it life visually. Any hidden easter eggs in the music video?

We designed the glowing heart and call it the Milagro in Mexican culture and its light to be a metaphor for the healing throughout the story. Also, my styling in the video is a tribute to artist, Frida Kahlo.

How was it like working with Black Pink? Did you expect such a big support from the BP fandom?

Reaching out to the Korean Music Industry has been a pleasure, especially as to how warm and welcoming the audience has been. It’s also been a learning process because the language was new but somehow our distinct styles along with their energy, we just fit together perfectly. The BlackPink girls were so welcoming. We had an absolute blast while working on the song over FaceTime. How did you genuinely feel while making a Spanish song? Was it any different than writing English songs?

You know what's funny, is I actually think I sing better in Spanish. That was something I discovered. It was a lot of work, and look, you cannot mispronounce anything. It is something that needed to be precise.

‘These days, if I have to choose between building my tennis résumé

Koffee With Karan 7: Arjun Kapoor reveals why he took time before making his relationship public with Malaika Arora, says 'she has had a life, she has a child'