The final of Wimbledon 2021 Women’s Singles took place at the Centre Court, London on Saturday. Australian player Ashleigh Barty defeated her opponent, Czech Republic’s Karolina Pliskova to win her first Wimbledon title. Priyanka Chopra Jonas, who is shooting for Russo Brothers' Citadel in London, watched the match live. The global star shared pictures and videos from the Wimbledon final on her Instagram stories.

Priyanka was seen enjoying the match with her friend, Natasha Poonawalla. Natasha is a businesswoman and the wife of Serum Institute of India CEO Adar Poonawalla. They were seated in the Royal Box right behind Duchess Kate Middleton and Prince William. Pictures of Priyanka with former Wimbledon champions Billie Jean King and Martina Navratilova have gone viral on social media.

Recommended Read: ‘Timeless India all within the heart of New York City,’ says Priyanka Chopra Jonas as she opens the doors and gives a glimpse of her restaurant Sona

For the Wimbledon Final, Priyanka opted for a white marble printed dress from Fendi. She teamed it up with quirky black heels. She also wore a belt and earrings from Fendi. Natasha chose to wear a Gucci outfit for the match. 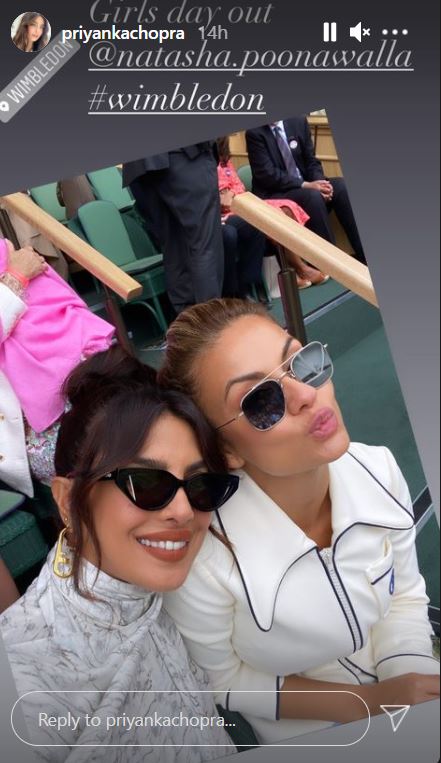 Workwise, Priyanka was last seen in the Netflix film, The White Tiger. She has projects like The Matrix 4, Text For You and Citadel in the pipeline.