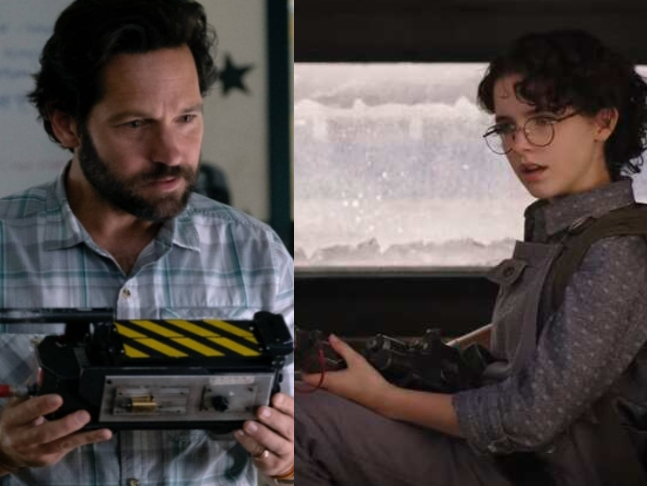 The first Ghostbusters film came out almost 40 years ago and it feels the same amount of time has elapsed since Ghostbusters: Afterlife was announced. The second trailer for the film dropped today after a gap one and a half years and gives an extended glimpse of what’s in store.

Ghostbusters: Afterlife will act as a sequel to 1984’s Ghostbusters and 1989’s Ghostbuster II and delves deep into the world of a mother (Carrie Coona) and her two kids Trevor and Phoebe (Finn Wolfhard and McKenna Grace) as they move to Oklahoma to take up residence at their grandfather’s decrepit old house and discovers the original Ghostbusters team and his trove of ghostbusting equipment. The kids are the grandchildren of Egon Spengler and find the Ectomobile in the house. The trailer shows Coona expressing her parental problems with the children’s teacher Mr.Gooberson played by Paul Rudd and confessing to him that she does not feel a bond with daughter albeit she has better relations with her son. Paul’s character happens to be big fans of her father and his Ghostbusting teammates including Venkman, Stanz, and Zeddemore.

He came out here for a reason. Watch the new trailer for #Ghostbusters: Afterlife, exclusively in movie theaters this November. pic.twitter.com/MGwhEbyqAW

Ghostbusters: Afterlife is directed by Jason Reitman who is taking the reins from his father Ivan Reitman, who directed the previous two original films. Other casts of the film includes Logan King, Tracy Letts and Celeste O’Connor while original stars like Bill Murray, Dan Aykroyd, Sigourney Weaver, Annie Potts and Ernie Hudson are all expected to return but the film is not explicitly about them.