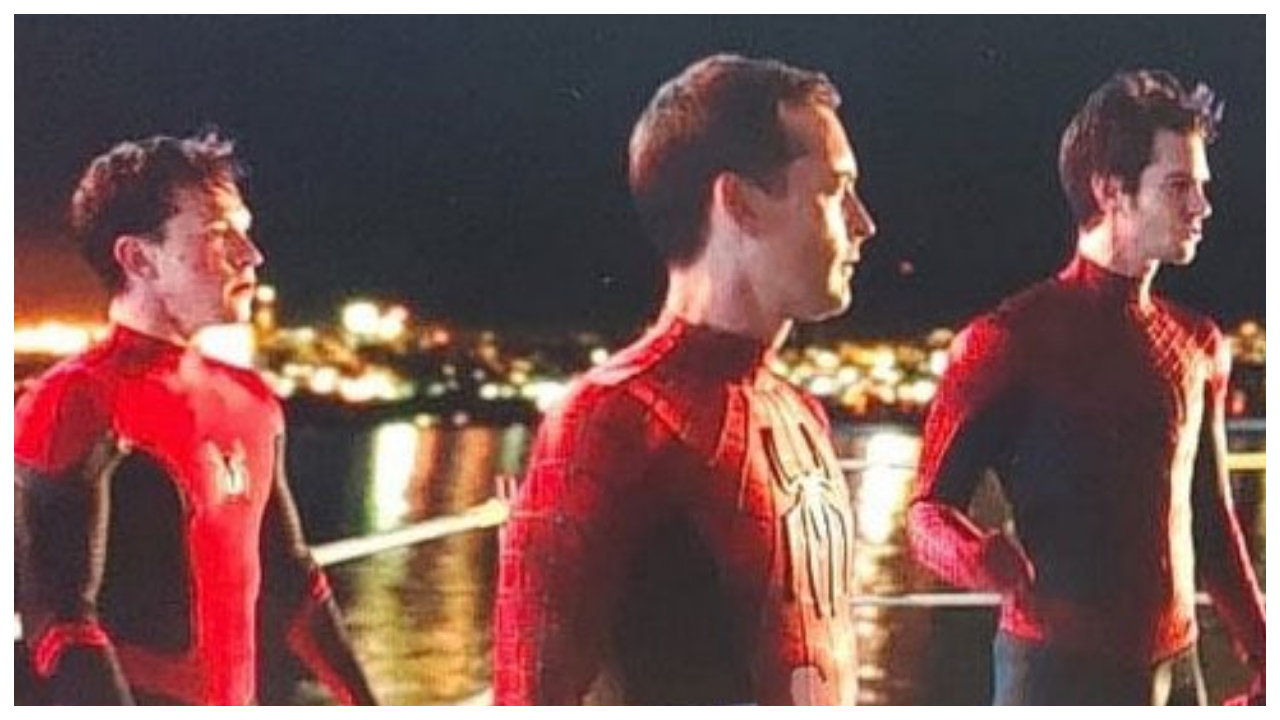 Fans of Spider-Man will lose their calm over the new leak that has come out of the upcoming superhero film Spider-Man: No Way Home. There was speculation that the film is reuniting the three Spider-Mans- Tom Holland, Andrew Garfield and Tobey Maguire of the Marvel Cinematic Universe and now an alleged leaked photo has increased and almost confirmed the reunion. However, there has been no official confirmation but the leaked photo shows the three actors together in the same frame wearing Spider-Man costumes with their masks off.

The photo is apparently from an upcoming trailer of the film and shows them bruised and battered most likely after a fight and on a cruise ship looking at something that is out of the frame. Along with this, another photo shows Jon Favreau’s Happy Hogan joined by Tom Holland’s Peter Parker and his Aunt May, played by Marissa Tomei sitting around a dining table.

HOLY SHOOT!! THESE ARE NEW LEAKED PHOTO'S OF TOBEY, ANDREW, AND TOM ALL TOGETHER. NOW THE SCENE WHERE TOM SAID HE SHOT A VERY SPECIAL SCENE TOGETHER WITH A MYSTERY CHARCTER TALKING ABOUT WHAT IT'S LIKE TO BE A HERO, IS NOW CONFIRMED TO BE MATT MURDOCK!!!#SpiderManNowWayHome pic.twitter.com/HVeuGSmyXQ

BREAKING NEWS: #SpiderManNowWayHome Massive Image leak contains both Tom Holland's Spider Man as well as yup take a look for your self pic.twitter.com/9Tke34piLH

Charlie Cox, who plays Daredevil in the Netflix series can also be seen wearing his grey suit, holding a walking stick and wearing red glasses. The photos that have gone viral bear the watermark of The John Campea Show, a film talk show hosted by Canadian film review John Campea on YouTube.

This is supposed to be the final battle but judging by the looks of both Tobey and Andrew compared to Tom’s I’m starting to think they show up at the very end of the movie which of course will definitely make me angry.#SpiderManNowWayHome pic.twitter.com/EbmuYRABKe

Maguire played Spider-Man aka Peter Parker from 2002 to 2004 while Garfied took over in 2012 and was cast in the role till 2014. Holland came on board in his first screen appearance as Spider-Man in 2016 and since then appeared in several MCU films including Avengers: Infinity War and Avengers: Endgame. Spider-Man: No Way Home also sees Benedict Cumberbatch reprise his role of Dr.Strange and Zendaya play Parker’s girlfriend MJ. Jacob Batalon plays Parker’s friend Ned and Jamie Foxx will star as Electro. The film is slated to release on December 17 this year.