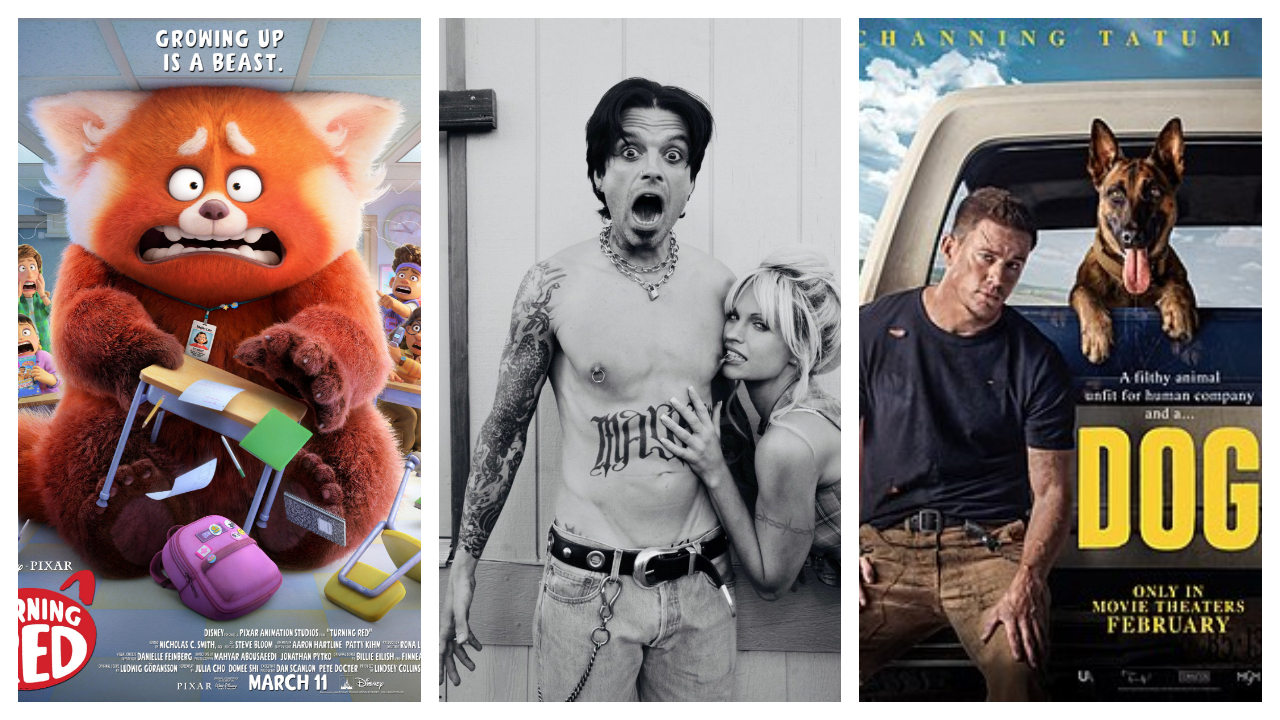 Some new trailers from Hollywood have been dropped to regale the audience. Disney and Pixar’s new animated film Turning Red will surely appeal to kids and adults alike. On the other hand, Channing Tatum turns up with a heartwarming buddy comedy in Dog and Baz Luhrmann shared the first look of his Elvis Presley movie starring Austin Butler in the lead. Sebastian Stan and Lily James stun as Tommy Lee and Pamela Anderson in Hulu’s Pam & Tommy. Read on for more details.

Disney’s Turning Red trailer brings to a new teenage problem to its 13-year-old protagonist Mei (voiced by Rosalie Chiang) that of turning into a big red panda. The trailer shows her ancestors’ mystical connection to red pandas which make her vulnerable to changing into one when her emotions get too strong. Turning Red shows Mei’s struggles to navigate the ups and downs of adolescence while keeping her big furry problem a secret. Fortunately, she has her family and friends to fall back on. The trailer also shows Mei’s and her friends’ obsession with Pixar's first ever boy band, 4*Town. The trailer breaks out NSYNC’s It’s Gotta Be Me, the makers have roped in Billie Eilish and FINNEAS to write the fictional band’s songs.

RECOMMENDED READ: Spencer Review: Kristen Stewart shines as Princess Diana in a ‘fable’ born out of ‘true tragedy’ as she breaks away from the British Royal Family

Channing Tatum is making his feature directorial debut with the heartfelt buddy comedy Dog. Tatum co-directs the film with Reid Carolin. The trailer of the film has been released. The official synopsis for “Dog” reads: “[The film] is a buddy comedy that follows the misadventures of two former Army Rangers paired against their will on the road trip of a lifetime. Army Ranger Briggs (Tatum) and Lulu (a Belgian Malinois dog) buckle into a 1984 Ford Bronco and race down the Pacific Coast in hopes of making it to a fellow soldier’s funeral on time. Along the way, they’ll drive each other completely crazy, break a small handful of laws, narrowly evade death, and learn to let down their guards in order to have a fighting chance of finding happiness.” Dog is set to be released on February 18, 2022.

Made a little something to let you good people know we are taking care of business on June 24, 2022.#Elvis #TCB pic.twitter.com/grf8IGqfw9

Baz Luhrmann dropped the first look of Austin Butler as Elvis Presley, the King of Rock ‘n’Roll in his upcoming untitled film based on the singer. The film covers the rock legend’s rag-to-riches story, seen through the prism of his complex relationship over two decades with manager Colonel Tom Parker (played by Tom Hanks). The film is slated to release on June 24, 2022.

Hulu has dropped the trailer for its miniseries Pam & Tommy based on the whirlwind romance and the release of the infamous sex tape of Tommy Lee and Pamela Anderson. The series features Sebastian Stan and Lily James in the lead. The trailer sums up the couple’s relationship and encapsulates the chaotic yet glam vibes of the 90s. The series also stars Seth Rogen, Taylor Schilling, and Nick Offerman and premieres on Hulu on February 2, 2022.