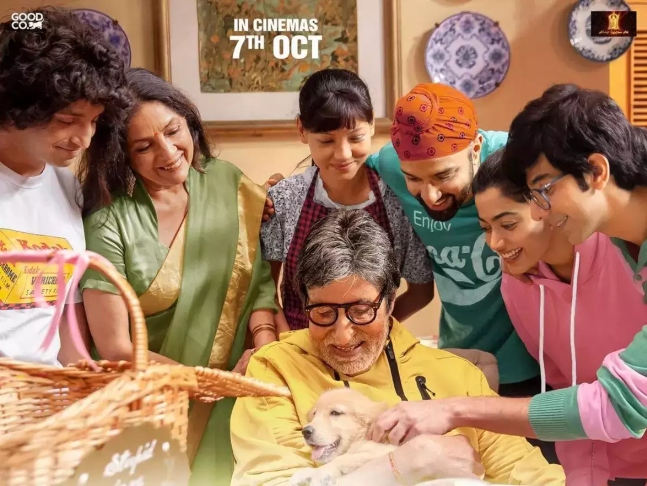 "Itni bhi kya jaldi thi jaane ki," asks Amitabh Bachchan looking at a pot containing the ashes of his on-screen wife. This, including all those 144 minutes of Goodbye, manages to break your heart. Farewells are always hard and when the loss gets personal, it leaves you numb. Vikas Bahl, in his directorial, teaches you the importance of loving your loved ones and giving them all the happiness they deserve before it's too late by capturing the scenario of a regular Chandigarh-based family.

The life of the family is Gayatri Bhalla (Neena Gupta), a perfect wife, progressive and supportive mother and nurturer. She often plays a peacemaker when her old-school husband Harish Bhalla (Amitabh Bachchan) and daughter Tara (Rashmika Mandanna) have arguments over the fact that they belong to different schools of thought. Gayatri and Harish have three sons too -  Karan (Pavail Gulati), Angad (Sahil Mehta) and Nakul (Abhishekh Khan). The senior couple is happily living in Chandigarh while their children are busy making their careers in different cities and countries. However, clouds of grief and sadness overtake skies of happiness and joy with Gayatri's untimely demise due to a heart attack. The unexpected family reunion leads to a journey that's more than just life-changing.

Goodbye, directed by Vikas Bahl for Ekta Kapoor's Balaji Telefilms, acts just like an arrow that pierces straight into your heart, exposing the deepest wounds of loss, strained parent-child relationship, the conflict between modern ideologies and old-school beliefs and of course science vs superstition. Loss is an emotion that every human experiences at various stages of life and the film has the power to resonate with every single person without even trying hard.

Through Rashmika's character, Vikas holds a mirror to the child-parent relationship without getting preachy. All this takes place without compromising on humour. While you are expecting Goodbye to be an out-n-out tearjerker, be prepared for some brilliantly constructed funny moments in the grimmest of situations. Also, in the next breath, keep tissues ready.

The film is enhanced further with relatable characters like gossip-interested and attention-seeking neighbours and relatives who poke their noses in every family matter without seeking consent from the bereaved ones. It is a wholesome package which is rare to find these days.

What would Goodbye even be without Amitabh Bachchan as one of the active and strongest pillars? It is blasphemy to just call him a fantastic performer. Speaking with his eyes, the veteran bridges the gap between Harish and the audience. The character's helplessness shines while he struggles to understand his children and their modern outlooks while nursing the heartache of losing his lifelong partner. One of the high points of Goodbye is Mr Bachchan's monologue right before immersing Gayatri's ashes in the Ganges. There's rarely anything as impactful as that one scene in the history of Indian cinema.

If this is Rashmika Mandanna's Hindi debut, then we are excited to be seeing her more often in Bollywood. Sharing the screen space with legends like Mr Bachchan and Neena Gupta can be intimidating but the young actress stands her ground. Making her presence felt, Rashmika delivers a nuanced performance. Representing modern Indian women, we can see a reflection of ourselves in Tara. While there is a sternness in Tara, Rashmika adds softness to the character with her craft and beauty. Neena Gupta is thoroughly at her best as Gayatri. Though she appears in flashes, the actress leaves behind a sweet trace amid heavy emotional moments. By the way, the emotional moments are also created by her.

After an intensely emotional first half, Sunil Grover comes into the picture as a perfect clutter-breaker. He aptly uses his comic timing to balance laughs and tears. As a pandit, who performs Gayatri's last rites, Sunil brings sunshine to the story, making it next to perfect. Pavail Gulati, Elli AvrRam, Sahil Mehta and Abhishekh Khan are as impactful as the rest.

In Goodbye, Amit Trivedi's music plays a very important role. The most well-placed songs have to be Chann Pardesi and Jaikal Mahakal. The cinematography and editing keep the narrative flowing easily without any obstacles.

Without wasting a single minute, go and give your parents, grandparents and all near-dear ones a tight, never-ending hug. Just like the warm hug Goodbye gives by taking the 'right turn' in every possible aspect.