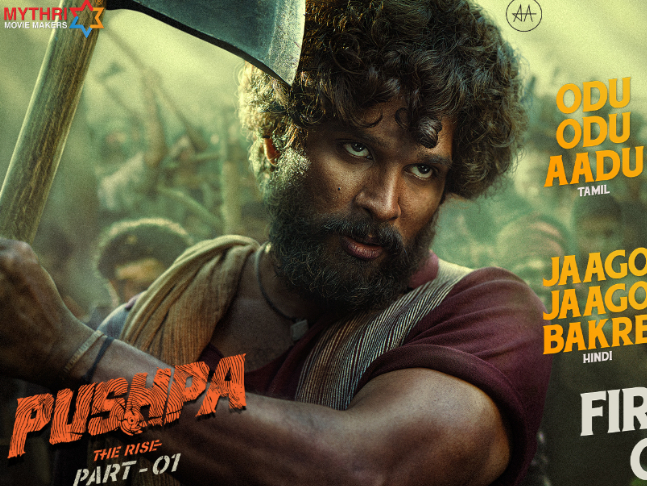 Allu Arjun's Pushpa packs a surprise for the fans in the form of an energetic song titled Jaago Jaago Bakre. The super charged song from one of India's highly awaited mega pan-India films headlined by Allu Arjun is out now. Amid the tremendous curiosity among the fans who are eagerly waiting for the release of the film, the makers drop the high on energy track that has many powerful traits of Pushpa Raj, the character played by Allu Arjun. It is expected to be one of the most popular chartbusters of 2021.

Producers Naveen Yerneni and Y. Ravi Shankar of Mythri Movie Makers jointly say, “It makes us very happy to offer Jaago Jaago Bakre to the listeners. The music of Pushpa is an extension of its storyline and we're glad to release one of the most energetic songs from it. The song is a musical introduction of Pushpa Raj, the role essayed by Allu Arjun. We hope to see love from the listeners of diverse languages."

Happy birthday my dear friend @ThisIsDSP. Can’t wait for the world to witness the fantastic album you have composed for #Pushpa, and fall in love with you and your music yet again. Keep entertaining us with your magic. pic.twitter.com/Xnd1aML2QC

Pushpa revolves around the red sanders heist in the hills of Andhra Pradesh. With this film, the audience shall see Allu Arjun and Rashmika Mandanna, sharing the screen space for the first time. Pushpa will be releasing in two parts.